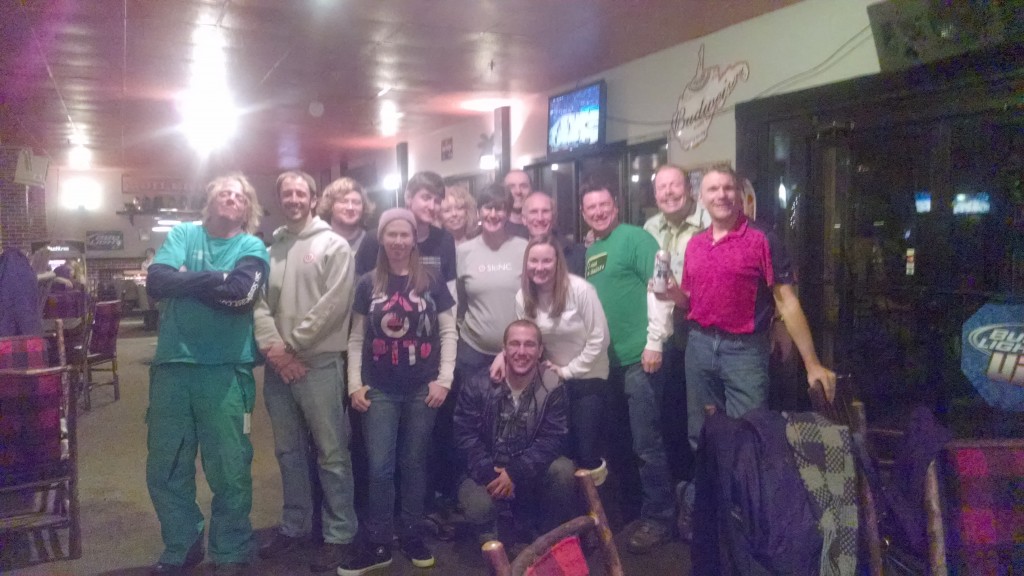 Well, I recorded an audio podcast and was going to upload it, but as anyone who has been to Snowshoe before knows, the internet connection isn't the fastest here.  So, I'm going to scramble and see how quickly I can write this First Trax article.

I'm pretty bummed this morning as I have to check out from Snowshoe and head back to Charlotte.  This weekend has been awesome!  I only make it up to Snowshoe once a year, but every time I come I don't want to leave.  This place is so much fun.  Staying slopeside is the best.  As is having a hot tub to relax in after a day of riding.  I like hot tubs. Next time you come to Snowshoe, ask for Highland House 226.  It's the best!

If you didn't know, this weekend was the Ski Southeast mini-summit.  I say mini because we didn't get the crowd that we have in past years, but it was fun nonetheless.  Those of us who made it had a great time, as we always do.  My girlfriend and I came up on Thursday night and after working for the first half of the day on Friday, I was able to get out in the afternoon and get some riding in.  It was a bluebird day and the snow was pretty teriffic.  Chalky goodness.  We also had an airshow as some fighter jets were doing some training or something I guess and flew over the mountain all day.  That was pretty cool. Friday was bluebird and sweet!

I'm pretty sure Snowshoe is selling a ton of Ridiculous Passes again, because there was a god amount of people on the mountain yesterday.  I think Friday was the first day that the 2014-2015 pass was valid to use, and a lot of people are taking advantage of it this weekend.  You really can't beat $200 for a season pass, especially when it's to what is arguably the best resort in the region.

We got lucky and the weather cooperated yesterday.  Earlier this week I was a little worried that it might be sloppy, but luckily all we had to worry about was some clouds.  The sun even came out for periods of time.  First tracks was sick as it was pretty empty for the first hour and there was lots of corduroy to be had.  I eventually made it over to Western Territory and lapped Cupp and Shay's several times.  So much fun. My girlfriend coming down the mountain.  The snow was great! Looking down Shay's Revenge.  I forgot how beautiful it is over there!

After some beers in the hot tub at the end of the day, my girlfriend and I had some Mexican food then met up with everyone at Hoot's.  The beer was flowing, at least for mrclemsonkeri and I, and everyone had a good time.  We were treated to the sounds of Captain America singing some karaoke.  When I get home and have a better internet connection, I promise I will post the video of this.  It was awesome. Captain America singing his heart out.

I was contemplating riding this morning, but I woke up to foggy conditions and an IPA induced headache so it's a no go for me.  Unfortunately, I have to leave.  And of course the day after I leave it's going to snow a bunch.  The NWS is calling for 8-12 inches here tomorrow.  Gah!

Enough about my Snowshoe trip.  Let's talk about what's going on everywhere else.  I was going through the snow report this morning and was pleasantly surprised at what I was seeing.  Admittedly, I don't keep up with it as much as I should during the week.  I was pretty stoked though as I was looking at each resort and I kept seeing some great base depth numbers and high trail counts.  Everyone is still at or near being 100% open, which is awesome.

We are into March now and things are going to begin to wind down in the coming weeks.  Some places have ceased snowmaking which is kind of a bummer, but makes sense financially.  In reality, most everyone has plenty of snow on the mountain to make it for another few weeks even without the addition of manmade snow.  That said, it's always nice to see some resorts continue to make snow into March and put out the best product possible.  Kudos to them.

Sapphire Valley is closing up shop for the season today.  That's not really a huge surprise as they generally close at this time every year.  I don't think we'll see anymore closures for another two weeks.  The middle of March is when we see a lot of places call it quits and I think the weekend of the 15th and 16th is when we'll see a number of places do this.  Then again, if we can see continued cold and snow (which is in the forecast this week) we might see a lot of places take it to the end of the month, and some maybe even into April.  Cross your fingers!

That's it for today.  I hope I didn't ramble too much.  Thanks to Snowshoe for having us this weekend!  Like I said earlier, I always have so much fun up here!  Tim is back with you guys tomorrow.  I'm out.