A Little Dose of Snow Today, A LOT of Snow This Weekend 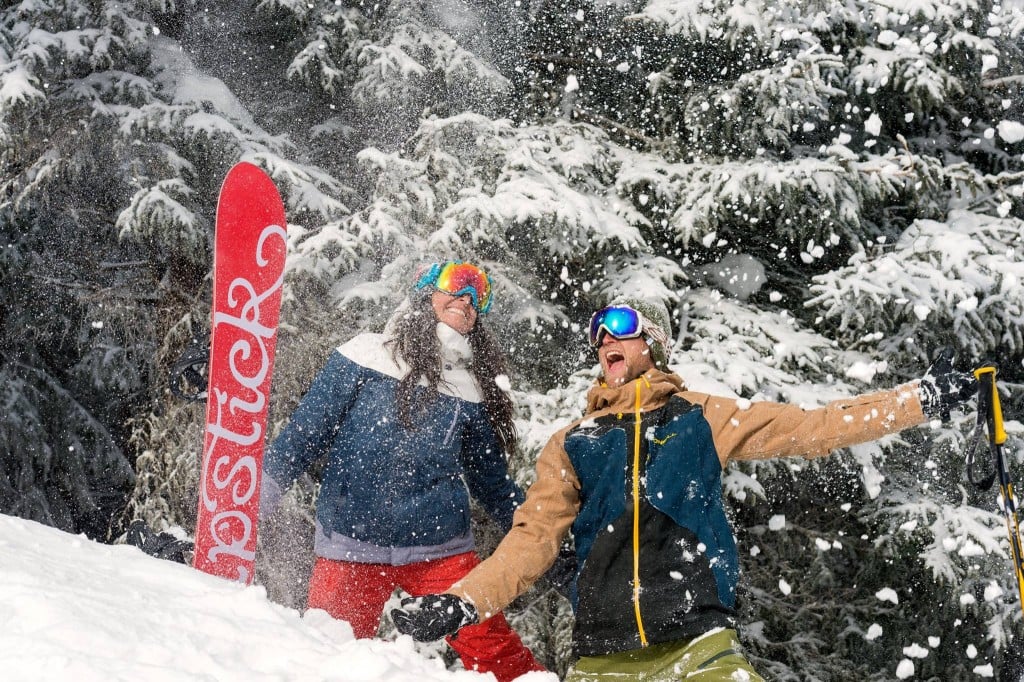 I don’t even know where to start today.  I am so flustered this morning at the potential for some legitimate powder turns this weekend.  Yesterday was a roller coaster of emotion watching the weather models come in.  Today will probably be the same as we are only a few days out now from a potentially huge snow storm.  Easily the biggest in a few years.  I will talk more about that in a minute because between now and then we actually have some other snow to talk about today.  Check out the current radar loop this morning.  I drew a red line which pretty much follows the spine of the Southern Appalachians.

This is just a teaser event for the weekend and will move through quickly today.  However, several inches of snow is possible and will provide some nice and soft turns if you are lucky enough to be riding today.  In general, 1-4″ is a good bet for the North Carolina resorts and Ober Gatlinburg in Tennessee.  There’s actually a Winter Weather Advisory out for those resorts today.

A few inches is also expected up into West Virginia.  They look to see 1-2″ of snow today, maybe 3 if they are lucky.  It is funny to me to see a Winter Weather Advisory out for the North Carolina resorts yet there currently isn’t one for the West Virginia ones.  I know more snow is expected in NC, but it’s not that much in the grand scheme of things.  Different NWS offices have different criteria for winter weather advisories.

It looks like the Virginia resorts are only going to see light accumulations at best, if any, but don’t feel too bad for them.  They are going to get their fair share Friday, Saturday, and Sunday.

Biggest Storm in a Few Years?

Unless you’ve been living under a rock, you have undoubtedly heard about the upcoming winter storm for the weekend.  It’s been several years since we have seen a storm with this kind of potential for the ENTIRE region.  I know we had a storm last year that dumped a few feet at Snowshoe (I think it was 26″), and there have been other events with heavy snow in certain areas, but this one looks to deliver a healthy dose of snow for every ski resort in the region.

I will start by showing some video updates from our two meteorologists, Brad Panovich and Herb Stevens.  Brad emailed me the video yesterday and the title of his email was “The Could Be the Best Storm in Years”.  I was sitting on my couch checking email on my phone and I immediately jumped up and ran into my office to check it out.  Now, I am a weather geek and keep up with things, so I know what has been going on.  But to see an email from him with a subject like that really got me stoked.  Here’s what he was saying yesterday.

He referenced how people were freaking out about the Euro model run yesterday afternoon and oh how that was so true.  It was funny to watch it unfold in real time on Twitter and I also follow a weather forum and the people in there were wigging out.

Joe Stevens just emailed me the latest forecast from the Skiing Weatherman, aka Herb Stevens.  Here is what he’s saying.

Two phrases to take away from that video.  One, “Mother Nature is ready to put the hammer down” and two, “measured in feet” when referring to snow totals for West Virginia.  Woooo!

To sum up, Virginia and West Virginia are looking more and more like they are going to get crushed.  Saturday looks to be epic at ski resorts in those two states.  Both of the major weather models are showing upwards of 2 feet (and possibly more) for resorts up that way, especially for Western Central Virginia and Eastern Central West Virginia.  Hopefully that makes sense.

North Carolina looks to score big as well, just not quite as much as our brethren further north.  We could have some periods where freezing rain/sleet mix in.  Regardless, all the resorts here look to get a healthy dose of snow, especially in the Northwestern part of the state.  One of the local forecasters for the Boone area is calling for 1-2 feet.  Wooo!  Mike and I are planning on doing a live broadcast Friday morning from somewhere in the Sugar Mountain area and then going out and getting some video from on the slopes.  So pumped!

While all of this snow in the mountains is going to be awesome, wintry weather is also expected off the mountain as well and the roads are going to be terrible.  If you want to partake in the powder fun this weekend, I would start making plans to get up there as early as possible.  I’m going up to Boone tomorrow night so I don’t have to deal with the roads on Friday.  I will be really interested to see the crowds this weekend, just to see how many people actually make it up to the resorts.  Mike and I talked about doing the live broadcast at Sugar Ski & Country Club which is right at the entrance to Sugar.  Highway 184 is right out front and that would be our backdrop.  That road gets sketchy pretty quickly and I’ve seen many accidents right there.  I have a feeling we might see some while we’re taping.

One final thing about the weather forecast…keep paying attention to it.  There are still a lot of details to be worked out and things should become clearer today.

Conditions right now continue to improve every day.  Every ski resort in the region is offering superb skiing and snowboarding conditions.  Our open trail count is still behind where we would normally be, but that should change after this weekend.  I don’t have enough time to count all of the open trails, but many resorts are 85% open or so.  Some a little more than others, some a little less.  The one notable I wanted to mention is Sugar Mountain opened Whoopdeedoo today.  It’s a double black diamond trail and a legit double black at that.  I cannot wait to ride that in powder in just a few days.