A Little Bit of Snow This AM For Some, Mostly More Snowmaking Though 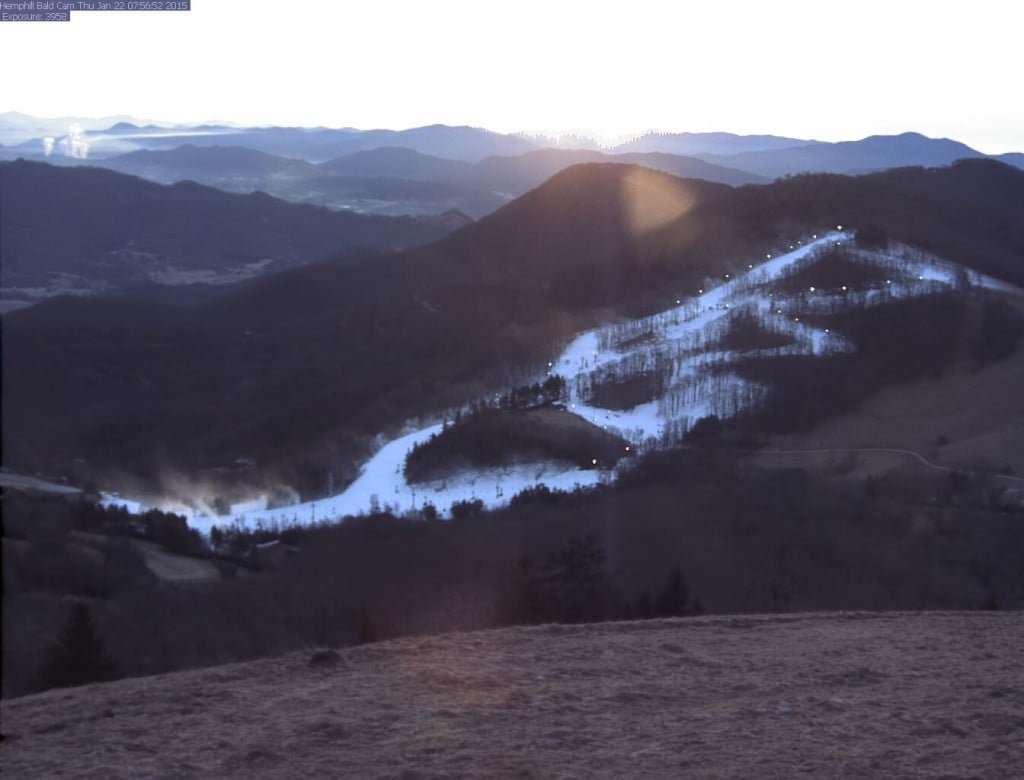 It’s a pretty decent morning at the ski areas across the region.  There is a good amount of cloud cover out there which is making for a gray morning at most spots, but temps are cold enough at a number of the resorts so that they were able to make snow.  I’d say about half are making snow this AM.  Here’s the Hemphill Cam at Cataloochee.  Looks a little less cloudy down there.

I feel like this shot exemplifies conditions in the southern portion of the region right now, basically anywhere outside of northern West Virginia and western Maryland.  Lots of snowmaking, plenty of trails open and a good amount of snow on those trails, but absolutely zilch in terms of natural snowfall anywhere else in the mountains.  Sigh.

While most of the resorts are struggling with natural snow, the northern portion of the region continues to see little snow events.  Canaan, Timberline, Snowshoe, and Wisp are all reporting some natural snow this AM.  Bryce Resort in Virginia is reporting 2″ this morning, but I’m not buying it based on the webcam up there.  It looks more like a half inch or so.  Here are the totals:

I’d kill to ride in 4″ of freshies right now.

I think I got a little ahead of myself yesterday when talking about the possibility for snow tomorrow and Saturday.  I was too stoked on the possibility of a mini pow day!  It looks like temps are going to be too borderline now for a major snow event.  There will be some snow, but it’ll be mixed in with some sleet and freezing rain as well down here in the southern portion of the region.  Up into West Virginia and what not, they shouldn’t have to deal with that mix, so this storm looks to be better for those guys.

This is such a bummer for NC!  As Brad Panovich tweeted out yesterday, this is normally the PERFECT setup for a major snow event.  A Gulf low that tracks across the Southeast is usually money.  There’s just not enough cold air in place this time around.  Oof.

The good news is that the pattern is looking favorable.  The next week or two looks to be cold, so hopefully we can get another one of these lows to come our way.  The beginning of next week looks a little more promising for snow, so cross your fingers for that!

I’d expect the blues to get bluer if this pattern setups accordingly. pic.twitter.com/EIK5hJMXJz

Previous Post
A Snowy Latter Portion of the Week is in Store
Next Post
Brad’s Calling for Good Snow this Weekend and Perhaps BIG SNOW Next Week!