Just Chiming in With Some Assorted Comments… 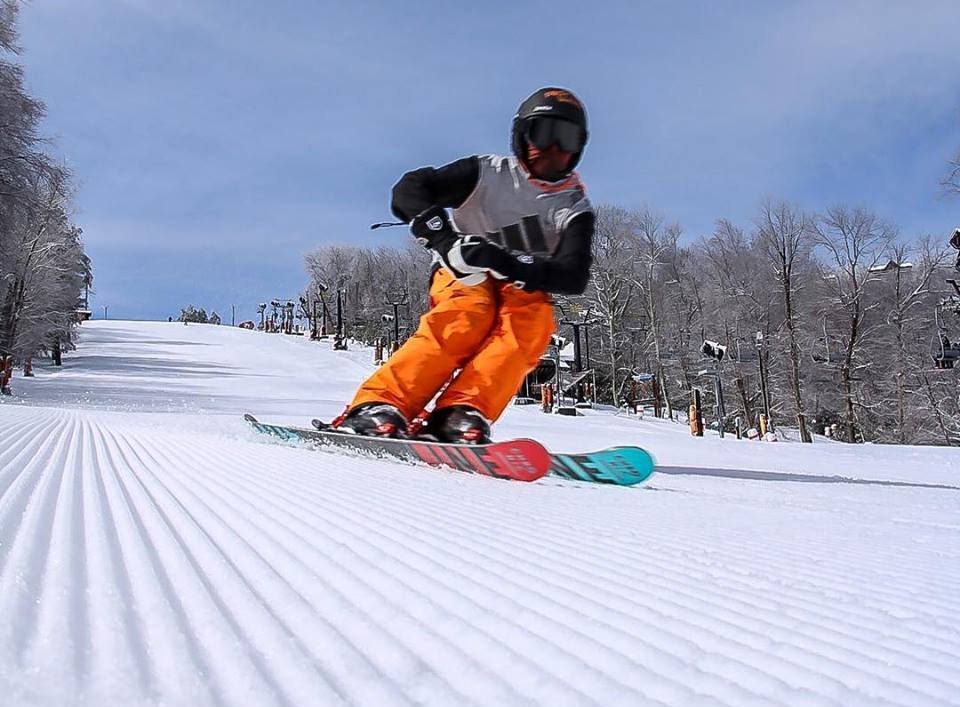 First, thanks to Kenny Griffin for covering me first thing this morning on the FirsTrax report. We had about 4-5″ of the most beautiful snow to fall this season at my home atop Sleepy Hollow. No wind and just beautiful snow. I’ll try to post some pics later.

My wife and I, along with my youngest daughter and a friend hiked up well above Beech Mountain Ski Resort and the snow was plenty deep up there – 5-6″ for certain.

That gorgeous snow changed over to sleet and then a sleet/freezing rain mix that had already created a quarter-inch coating of ice on everything as I headed to bed. At 5:30am this morning a bomb exploded (okay it was the transformer in my yard) as two trees had toppled and fell into the power lines. Those trees literally pulled the power pole over and almost out of the ground.

I spent most of this morning cutting trees off those lines (yes after getting clearance to) and now the wonderful crews of Blue Ridge Electric are doing their thing to restore power to my sometime today.

You’ll note that Joe Stevens’ has posted his end-of-season “Snowies” which mostly heeps praise on industry peeps that deserve recognition. Hard to believe this is Joe’s 13th annual run at those. Check those out:

Why Am I Even Posting???

Kenny and Joe did such a great job of covering me this morning, you might wonder why I’m even chiming in. I kind of have to. Read on.

I received more than a few emails that supported my comments and one that mentioned they were tired of reading about it and they actually made a point that to only be off 5″ over a five month period of time was “much about nothing”. I also received an email from another resort staffer who wrote that they were glad we are willing to draw attention to such things.

Truth is, the only reason that I brought the snow reporting issue up at all, was that this season we commented on inaccurate reporting for THREE ski areas – not just Sugar. Some of those emails were to share with the resort marketing and snow reporting crews that they had UNDER reported snowfall. Twice this season a ski resort actually counted a day of snowfall twice – once early and again later in the day. Those resorts adjusted their reports accordingly and thanked us.

Wisp under-reported snowfall a couple of times this season, and heck Cataloochee rarely mentions how much snow they get. So we’re “on it” both ways. Visitors want to know that they can depend on accurate reporting by us, the ski areas, etc.

In terms of Sugar only being off 5″ over a five month period – that was only half the reporting issue. However, let’s address that.

On Friday, Sugar was reporting 72″ of snowfall on the season. We and all of the CoCoRaHs reporters in the area had them down for 67″. Hence the 5″ difference. Doesn’t sound like much. However, what if I went around saying that I was 6’5″ tall (when I am only 6′ tall)? I’d look pretty stupid, right? What if someone did that on a dating site? They’d be misrepresenting the facts, right?

What if everyone else was presenting themselves accurately? The inaccurate guy would be potentially gaining some unfair advantage.

Snow is WHITE GOLD to ski areas. Inaccurately reporting it is just not cool…

The other reason that I chose to mention it was because one of the more respected weather gurus in the region recorded the snowfall this way this season.

Most of the errors came on two snow events. Also notice when snow was light to only a TRACE that the numbers were close. However, Beech Mountain’s elevation is 5,506′ up top and 4,675′ at the base while Sugar’s is 5,300′ at their pinnacle and 4,100′ at their base lodge. Everyone knows that more often than not, elevation is the difference in temperatures and snowfall. Yet on nine occasions this season Sugar reported significantly more snow than Beech or the local CoCoRaHs reporters shared. Does anyone believe that Sugar saw 5″ more snow than Beech on 1/13-1/17?

Yet one look at the report above would make it seem that Sugar saw almost 15″ more snow than Beech this season and it didn’t happen that way at all.

Actually an odd thing happened on the way to this update.

Sugar UNDER REPORTED snow for the first time this season. Coincidence? Maybe. But they did. This morning they are reporting 3″ of snow to Beech’s 5″ and I can tell you that both ski mountains saw 5″ last night. However, Sugar’s season long total (with that 5″) is 72″ and Beech’s is 78.6″.

Here’s hoping that Sugar gets back to calling it what is is next season. My guess is that there’s some snow-loving crazed person over there that can’t help but exaggerate the numbers out of sheer excitement, so I’m not saying its anything nefarious or purposeful. Man I hope not. It still isn’t cool when nobody else is doing it and particularly for those ski resorts that have official NWS stations on site.

…and for those who think I’m making too much fuss about nothing, don’t mess with me. Remember, I’m 6’3″ or 6’5″ tall…depending on the day.

Now as far as BASE DEPTH REPORTING goes – geez don’t get me started!

As usual, shoot me your emails if you want at [email protected]