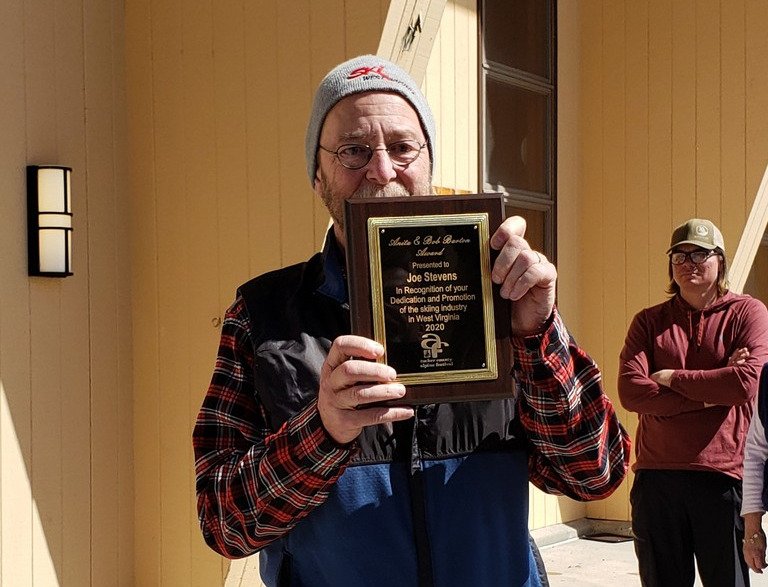 The award is given in recognition of dedication and promotion of the ski industry in West Virginia. Jessica Scowcroft, Director of the Tucker County Convention and Visitors Bureau presented the award. Several longtime, industry insiders, Steve Drumheller, General Manager of Canaan Valley Resort and Joe’s family were in attendance to witness Joe getting the award.

Scowcroft shared that Bob and Anita Barton were to matriarchs of the ski industry in Tucker County and that the award is presented to special people who are influential in promoting the industry throughout the state of West Virginia.

She spoke of the fact that Joe Stevens had initially been a skier, however when snowboarding began taking off in the early and mid 1990s, Stevens was approached by a ski store to give snowboarding a try. He was provided with a full setup of snowboard, boots, etc. and he’s been a snowboarder ever since.

In September of 1990 he took over as Director of Communications at Snowshoe Mountain and kept that position as the man responsible for getting the word about about all things Snowshoe until the Autumn of 2005 when he left Snowshoe to partner and start his own Media firm called “The Media Center” in Charleston, West Virginia…which provided satellite truck uplinks and video production services across the region.

Scowcroft shared the terminology that many of us have come to attribute to Stevens when she mentioned that she learned quickly that we should never utter the “R word” (rain) during the winter, and that Joe called it “under-developed snow”. (That got some applause.)

She also shared that Stevens won the National PR Person of Year for the National Ski & Snowboarding Association at their national conference.

Stevens has and continues to serve on multiple boards throughout West Virginia, including The West Virginia Hospitality and Travel Association. He is also the Official Spokesperson for the West Virginia Ski Areas Association. Stevens also has written a weekly column called Snow News is Good News, on SkiSoutheast.com for the last sixteen years.

Upon receiving the award you could tell that Stevens was genuinely moved and surprised – and then in true “Joe Stevens fashion” he started promoting the industry and got a nice reaction from the crowd when talking about Timberline Mountain for next season.

Check out Joe’s comments and the announcement on the Video below.

If you prefer you can watch this larger, higher resolution version via YouTube.

Congratulations to Joe Stevens for the recognition. It was certainly well-deserved.