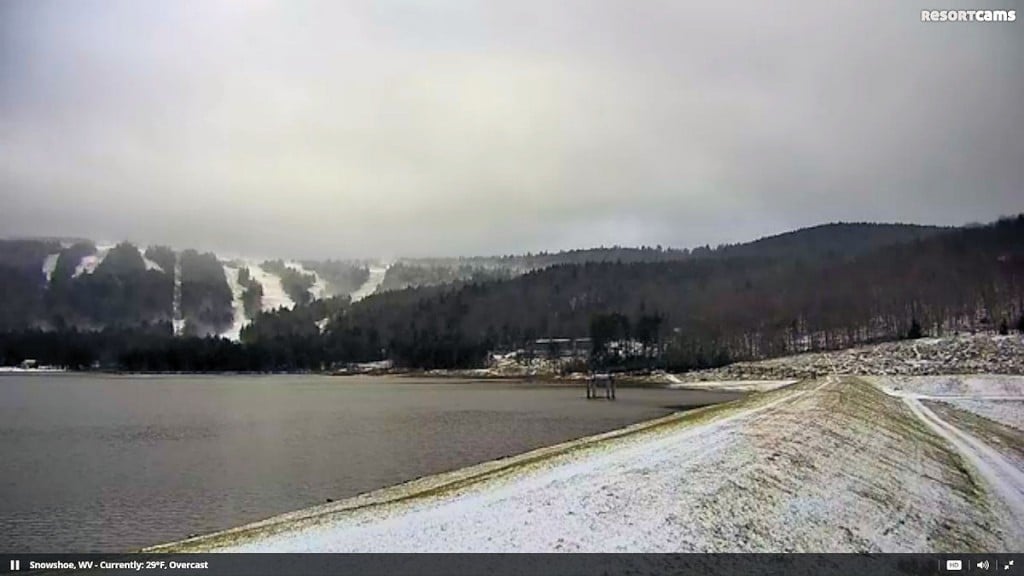 After 2″ of so of rain fell from Wisp Resort in Maryland, down through Snowshoe, Canaan Valley, and as much as nearly 4″ of rain fell across the Boone, Blowing Rock and Banner Elk areas – it is SO GOOD to see some snow!

Most of the higher elevations of North Carolina have reported some snow flakes and flurries…but as of 8am this morning those have given way to clear skies.

However, it is STILL snowing up around Canaan Valley, Snowshoe and Wisp Resorts into West Virginia and Maryland. The heaviest snowfall from this system is being reported in Davis, West Virginia – home to both Canaan Vallery Resort and Timberline Resort where 1.7″ of snow has fallen so far.

It is also good to be reporting that we’re seeing SNOWMAKING happening at many (but not all) ski resorts.

Unfortunately none of the Virginia resorts, nor Winterplace Resort are seeing temperatures low enough to make snow this morning.

Thursday night should provide a bit colder temps so that more snowmaking will be happening and we should even see the Virginia and Tennessee ski areas able to make snow.

Meteorologist Brad Panovich has also provided his latest Skier’s Forecast video and he’s even talking about signs that maybe even a Nor-easter may be in our forecast. Watch that video below. We just posted the video at 8am this morning and it is getting a LOT of views so you guys are obviously ready for some skiing and snowboarding!

We’ve been at this “reporting stuff” for a couple of decades now and I had to chuckle about an email I received from “Michael” on Wednesday after I evidently shared a couple of temperatures as being reported by THE WEATHER CHANNEL. He wrote:

“On your articles you seem to use Weather Channel forecasts. I suggest using Onthesnow weather, as it has base and summit forecasts. TWC temperatures are usually 5-10 degrees of on predicted highs and lows.”

It was kind of cool receiving that email for two reasons. First because WE have been telling you guys that message for years. However, while we DO include WEATHER CHANNEL data in some cases, we also have a network of weather stations that are actually located ON the ski mountains, so those stations will be more accurate than via ANY 3rd party resource.

The second reason that Michael’s email as funny, was that he was responding to an article where in the same post that we included some temperatures, we were also reporting that Onthesnow also omits links to any of the Southeast and mid-Atlantic ski resorts. So it was funny to get an email from him advising us to use onthesnow to get temperatures.

…and actually onthesnow often uses those reporting stations close to the ski areas and not always those stations located ON the mountain. For example, RIGHT NOW onthesnow is reporting 25° for Beech Mountain Resort, when it is actually 18° there. They are pulling data from Banner Elk, not Beech.

They are reporting 26° for Sugar Mountain and it is actually 20° at Sugar.

However, it was kind of cool to hear “our preachings” come full circle back to us. The lesson to be learned here is, if you want the most accurate, up-to-date information regarding anything to do with our Southeastern and mid-Atlantic ski resorts…look no further than SkiSoutheast.com and ResortCams.com.

So some snow has fallen; some snowmaking is happening AND here’s the latest from around the region: 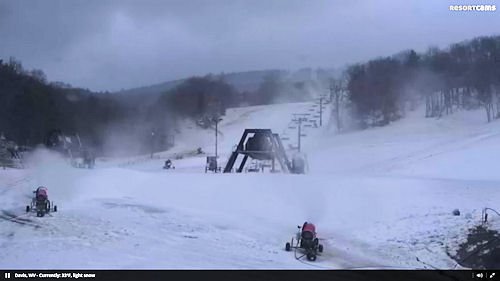 Canaan Valley Resort – 24° and according to David Lesher’s Davis, WV reporting (very accurate) they have received 1.7″ of snow overnight and this morning and they continue to see light snow as of this report. That is THE FIRST significant snowfall of the season so we’ll take it.

Timberline Resort – 27° amd they are making snow! Since they are located one ridge over from Canaan Valley, they too have received 1.7″ of new snow even though they are not reporting it.

Unfortunately their LIVE cam isn’t all that live due to terrible internet there on the mountain. You can see them making snow though and that is AWESOME news.

View all of our Ski Resort Webcams < click here 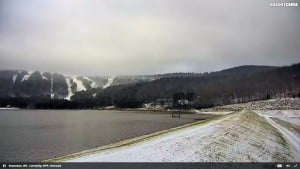 We really like this webcam as you can see the snow falling in the foreground as Snowshoe Mountain creates the backdrop.

You can CLICK on the image to the left to go directly to the LIVE stream of this camera!

Snowshoe Mountain Resort – 29° and they are making snow as well. They are not reporting any snowfall this morning, however according to their NWS reporting station on the mountain, they’ve seen .5″ of snow overnight and it is snowing on the LIVE basin camera.

After 2-4″ of rain fell across the Boone, Blowing Rock and the High Country it is great to see temperatures that are allowing the snowmakers a chance to rebuild the slopes.

The temps are forecasted to be even colder Thursday night (24° in Blowing Rock) so those snowguns will be cranking.

Some areas have reported a few snowflakes here and there.

After a mild stretch and lots of rain, all of the ski areas have a lot of base rebuilding to do (or in some cases building for the first time) and we’ll keep you advised as to openings and re-openings. Right now, we’re going to say that we’re thinking that a Saturday reopening for App, Beech, Cat and Sugar are more likely than a reopening on Friday. However we will keep you updated.

Kenny Griffin and I are PLANNING on shooting some footage from Beech Mountain tomorrow morning.

Canaan Valley Resort – 33° with LIGHT SNOW! this morning and they are making snow as well. It looks pretty awesome at the Davis, West Virginia ski area this morning. 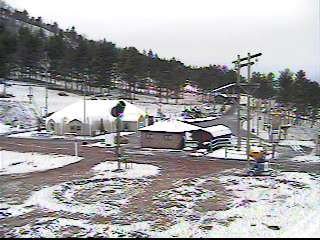 Wisp Resort – 27° and we cannot report whether they are making snow, as their webcams can’t make that out and they are not reporting it just yet. We spoke with Marketing Director, Lori Epp on Wednesday and they are installing a new LIVE webcam next week so we should be able to show some awesome shots from the Garrett County, Maryland resort soon enough.

Wisp reported more than 2″ of rain over the last couple of days but it looks pretty snowy up there this morning as our CoCoRaHs reporter up there is reporting .6″ of snow.

Appalachian Ski Mountain – 25.7° – Making snow up top but not at the base. All we can assume is that the temperature on the mountain is right on the edge of being able to make snow. They will certainly be able to make a bunch of snow tonight and they could get reopened after only 20-30 hours so we’re thinking perhaps a Saturday reopening??? We’ll keep you updated. 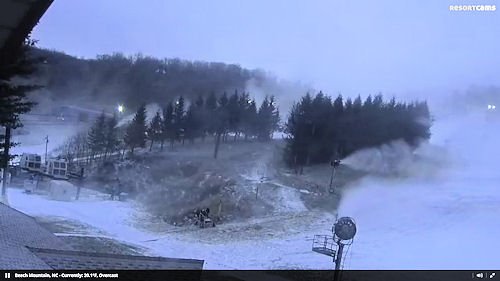 Beech Mountain Resort – 18° and making snow. Their snowmaking efforts and mechanism is so vastly improved over the last few years and even the winds look to be favorable atop Beech as their snowmaking looks perfectly pushing towards the mountain from the base fan guns.

Cataloochee Ski Area – 23.3° – They have such a blizzard of snowmaking happening this morning that you cannot see the base from the live webcam! They should reopen Friday/Saturday.

Sugar Mountain Resort – 20° this morning and they are making snow.

Wolf Ridge Resort – 26° – however we cannot report whether they are making snow or not as there is no update from over that way this morning. Their webcam is not operational and they haven’t updated their website. We spoke with Rick Bussey the other day and we’re hopeful to get the camera running. We’re going to speculate that they ARE making snow since Cataloochee Ski Area is.

Ober Gatlinburg – 31° and no snowmaking

Winterplace Resort – 32-33° – Not making snow yet but should tonight.

Wintergreen Resort – 25° Their website is reporting 25° but that has to be an error as the other Virginia ski areas are all showing 35° or milder. The NWS is reporting 37° at Wintergreen so we’re thinking that’s the accurate temp this morning. So now snowmaking just yet.

Previous Post
A Potential Nor’easter Next Week? Cold, Snowmaking Weather This Week!
Next Post
Ski Free at Cataloochee Sunday and Help a Great Cause