It’s NOT Been All That FOGGY in the Valle? How About Elsewhere? 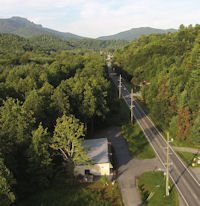 (I updated this post with some photos from Wednesday. A video too!)

It's hard for me to believe that it is ALREADY August 20th! However it IS – so I am a bit overdue in reporting our unofficial findings as it pertains to "Fogs in August" at this point. Seemingly every morning as I drive into work from the metropolis of Sleepy Hollow and into the industry-laden community of Foscoe – I have witnessed FOG. Upon arrival at my office I "officially" add another tick mark to a notepad where I've been keeping up with them. Admittedly I missed a couple of weekends, so I would LOG INTO ResortCams and look around at Banner Elk, Boone, Beech etc. 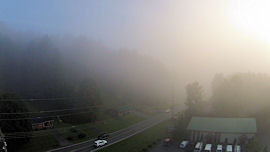 <<< I'd say this shot shows it was foggy this morning (Aug 20th). Probably THE foggiest in August thus far.

The answer to how many fogs there have been thus far would vary depending on where you look and who you ask – including moi. For example:

The OFFICIAL bean counter at The Mast General Stores is Tom Payne. I called him this morning because they've been officially keeping up with this important task for more than a couple of decades. This morning was particularly HEAVY FOG from Beech Mountain to Foscoe so I decided to give old Tom a call.

Tom is one of those silver-throated, deep voiced guys who SOUNDS authoritative enough. His answer for how many fogs thus far in August (through this morning, August 20)? 6.  That is SIX.

I probably shocked him when I responded, "Tom, have you missed a few days of work?"  He replied, "No, Mike. This time last year we already had two and half times that many foggy mornings, but we've only had SIX here in the Valle."

That's Valle Crucis for those unaware of the location of the Original Mast General Store.

I spoke with a friend who works over at Elk River Country Club and he shared that he's been keeping up with it because he also works at Sugar Mountain during winters.

Whew! Now we're getting somewhere.  The reason for my concern was because I was beginning to wonder whether or not I had been looking at this situation through "foggy colored glasses" because my official/unofficial count thus far? 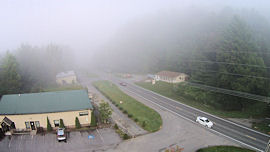 Maybe it's just foggier over the Watauga River. Maybe it's the valley between the peaks of Beech, Sugar, Hawksnest and Boone that have created this "foggy apparition" of mine. Maybe I'm developing cataracts. (I shouldn't even joke about that.) However, in my book, we're right on par with a normal season.

There's eleven more days so we'll see how it goes, but I'm liking what I'm seeing so far.

Here is a video from Wednesday's fog and Thursday's clear skies.

It was so foggy that I couldn't even capture enough GPS satellites to safely launch. However, that never scares me too much (a lie)…so I launched anyway. Thankfully once it got some altitude it picked up 7 satellites which quickly stabilized the ease of flight.

I spent some time flying in and slightly above and under the clouds and shot some video and snapshots of the fog. Nothing too pretty to see there since it WAS fog. However when I landed I was shocked to see how darn WET the chopper was.

I can't wait to film the slopes this winter. That is going to be a hoot. It should also be a GREAT marketing tool for us to show newbies and new, potential visitors to the resorts a top-to-bottom bird's eye view of what each slope and trail looks like. We'll see how many we can get to this season, depending on the cooperation and interest of the ski resorts themselves.

Joe Stevens always sends me some of the latest news in the industry and this morning my inbox included a tagline that interested me. It read:

I read the article because our Southeast and mid-Atlantic ski areas count on a lot of skier traffic from the Sunshine state. I'd say that Florida is second only to North Carolina in terms of the number of skier visits for the North Carolina ski areas.

So when I saw that a Florida couple loved skiing so much that they decided to buy a ski resort – I had to read up on it. As it turns out SOMEHOW their passion for skiing took them to a 230 acre resort with 160 acres of ski-able terrain …but NO lodging and a lot of reno to do. Norway Mountain had been closed for a couple of years and for some reason they figured their investment was best spent there.

Have ANY OF YOU got an idea as to some suggestion that YOU could have made to this passionate couple as to a ski area or two that you would have loved to see them purchase?

I'll leave it at that, but I know of a resort in Virginia and perhaps two in North Carolina that I could have recommended! Heck, how about the old Hawksnest ski area?

Previous Post
13 of 21 Foggy Days in August here at SkiSoutheast.com’s Offices
Next Post
New Advertising Structure for SkiSoutheast this Season!