It’s March and You Know What That Means…

Alright, so I’m hoping my report this morning is going to be a little better than yesterday. It was a little lacking yesterday and I realized why this morning. While I was getting coffee this morning at the Hess station in Seven Devils, the lady who is in there every morning told me the decaf was almost ready. I was like, "Decaf? Who drinks decaf?" She then informed me that she watched me get decaf yesterday morning. No wonder I was so lethargic yesterday! I thought I was getting sick or something, but it turns out I just hadn’t had my caffeine fix. I’m definitely feeling a heck of a lot peppier this morning as I made sure to get regular coffee.

The past few days sure have been nice across the region. I won’t lie, I’m getting the spring bug. I was talking to Mike this morning about possibly playing tennis next week since we’ll be in daylight savings time. I definitely need the exercise. It’d be a pretty cool afternoon if I could both play tennis in Seven Devils and get a night session in at App. I might have to try that next week.

It looks like we’re gonna have a bump in the road today though as a frontal system is gonna bring some underdeveloped snow our way later this afternoon. Luckily, the bulk of the precip won’t move in until tonight, so it shouldn’t interrupt your day on the slopes for the most part. Tomorrow will start out a little soggy, but things should clear up nicely and tomorrow, Saturday, and Sunday look to be pretty nice. I’m contemplating a Sunday session at App with carvebeast.

I talked yesterday briefly about some closures we might see this weekend. I’m glad I didn’t speculate too much because I would have been wrong about at least one resort. Yesterday morning, Winterplace had their late season rates/hours on their website as going through March 11th. I emailed Travis Roberts and he told me he didn’t think they were closing just yet, and he was right. By mid-morning yesterday they had March 18th posted as their final date, so it looks like NEXT Sunday will be their final day of operation. The cam up there still shows some rather stellar conditions so it comes as no surprise that they’ll be open another week. You can check out their latest video update by CLICKING HERE. It’s been pretty cool to see these weekly updates all season. 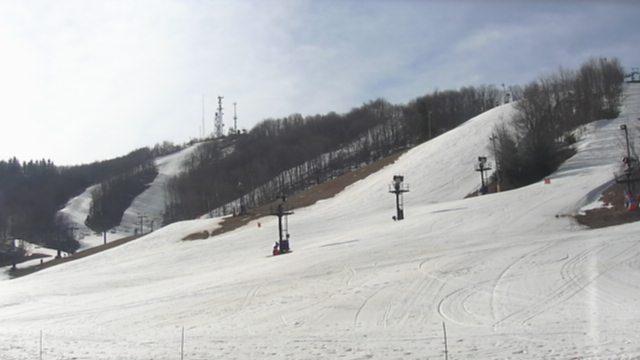 <<< Winterplace still looks pretty dang good this morning.  This has been one of my favorite cams all winter long!  The West Virginia resort will be open until at least next weekend.

The only West Virginia resort that will be closing for the season this weekend is Canaan Valley. Sunday will be their final day of operation for the season. They do have a special deal running right now that includes lodging and a lift ticket for only $69 per person per night, so if you’re wanting to head up there for one final weekend you should definitely take advantage of that.

It looks like we will not have any open ski areas in Virginia after this weekend. It’s definitely been a challenging winter for those guys as they’ve seen both a lack of snowfall and colder temps. Massanutten, Wintergreen (which I talked about yesterday), and Bryce Resort will all close up shop for the season on Sunday. Massanutten MIGHT be open next weekend depending on the weather next week but there are no promises and they are saying it’s a small chance.

As for here in NC, I’m curious to see if Beech will stay open past Sunday. I know they want to remain open for as long as possible, but they’ve already stopped doing night sessions and in all honesty the web cams haven’t shown a ton of people there this week. Financially speaking, it probably wouldn’t be smart to stay open another week but it’d be cool to see them do so. If you’re interested, they’re hosting a mountain bike event on Saturday. That will be pretty weird to see skiiers and snowboarders on the mountain at the same time as mountain bikers. It’s kind of cool though. App, Sugar, and Cataloochee are all planning on being open for another couple of weeks.

Before I go I’d like give Ober Gatlinburg a shout out. It was a challenging year there to say the least and the weather definitely didn’t cooperate. As a token of

appreciation to season pass holders from this season who toughed things out, they are offering a 50% discount on a season pass for next year.

"To show our commitment to our loyal Season Pass holders, Ober Gatlinburg would like to offer all 2011/2012 pass holders a 50% DISCOUNT on a 2012/2013 Season Pass. It must be purchased between September 1 and November 15, 2012. This offer is non-transferable and expires on November 15, 2012. Beginning November 16, 2012 passes will be available for purchase at full rate only – no discount will be applied."

How cool is that? I don’t think I’ve ever recalled a situation where a ski area has done that before. Very classy.  I know there are probably season pass holders at a few other resorts who are wishing they’d get the same kind of deal.

Previous Post
Family Day at Appalachian Ski Mountain is This Saturday!
Next Post
The Mast Farm Inn Welcoming Guests for over Two Centuries