Good grief it is cold this morning!  This is by far the coldest morning we’ve seen so far this season.  My girlfriend was all bundled up this morning when she left for work, and it’s only in the 20’s down here in Charlotte.  I don’t think she’d survive in the mountains where temperatures are ranging from zero to 20 degrees at the ski areas.  That’s right, it is 0 degrees at Canaan and Timberline as I type this.  And it’s only November 18th.  I’m sure a lot of people are doing a double take when looking at the calendar.

Here’s a list of the current temps this morning:

The wind is an issue right now and is making things even colder.  Check out the weather station graphics from atop Beech Mountain.  The wind chill up there is -10 degrees.  Also  note the sharp dropoff in temps.  The temperatures has dropped about 40 degrees in the last 24 hours!

Oooooweeee that is BRISK.  And that’s putting it lightly.  We’ve also got a little bit of natty snow to talk about as well.  App, Sugar, and Beech in North Carolina have seen around an inch or so.   Over in Tennessee, I couldn’t find a concrete number for Ober, but the webcam looks awesome and I was watching it for several minutes and it looked like it was snowing pretty hard.  If anyone from over there wants to send me in a snowfall number it’d be much appreciated!

Up in West Virginia, Winterplace saw a trace.  Further north, Snowshoe is reporting two inches this morning.  Their new webcams are so sick, especially the Basin Cam. 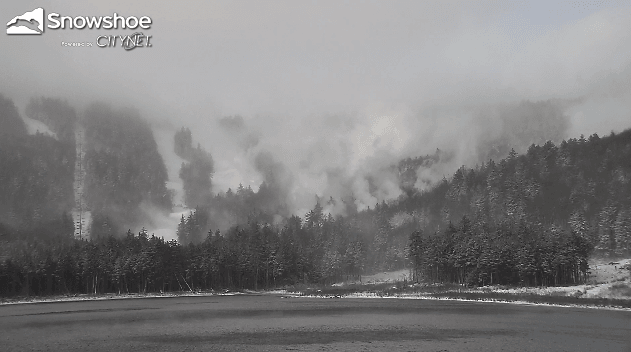 Canaan and Timberline received 1.4″ in the last 24 hours.  This website, http://data.canaanmtnsnow.com/, really is awesome.  It can be a challenge some mornings to get snowfall numbers even in the middle of the season, yet alone in mid-November before the resorts start reporting.  I don’t know who the guy is that does that report, but he is awesome.

Those piles are just going to keep getting bigger and bigger.  At this rate, opening day at some of the ski areas is going to be one of the best ever.  Speaking of opening days, I have a few announcements I wanted to mention this AM…

1.  Appalachian Ski Mountain opens Thursday and will be offering free lifties to the first 100 guests.  I’m going to go out on a limb and say they will be 100 percent open.  That limb is not very big.  They began making snow on Thursday and probably could have opened on Friday.  Expect some mid-season conditions out there this weekend.  Also, on a side note, I heard a rumor about a slope change out there.  I want to get confirmation before I go and talk about it, so if you know anything else shoot me an email.

2.  Ober Gatlinburg opens at least for tubing on Saturday.  Skiing is still undecided.  As I already mentioned, the webcam out there looks fantastic so hopefully they can get the ski season going.  Whatever happens, their annual “Back in Blue” Rail Jam is happening on Friday.  Here’s a video from last year.

3. Massanutten also opens for tubing this weekend and skiing and snowboarding next weekend.

That’s all for now in terms of opening dates for this weekend.  I’m sure we’ll see more by Thanksgiving and next weekend.  We’ll make sure to keep you updated on that.