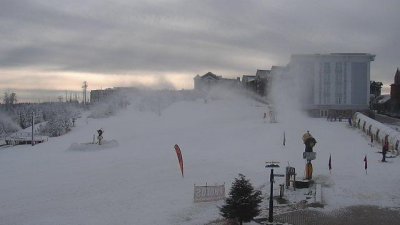 Gooooooooooooooooooooood morning peeps! It is a good morning isn't it? There's a chill in the air this morning and I woke up to the sound of the snow guns at Sugar. I like that. My girlfriend made fun of me last night and said that sound probably helps me fall asleep at night. Some people prefer the peaceful sounds of a babbling brook. Apparently I like the roar of snow blowers. Go figure. 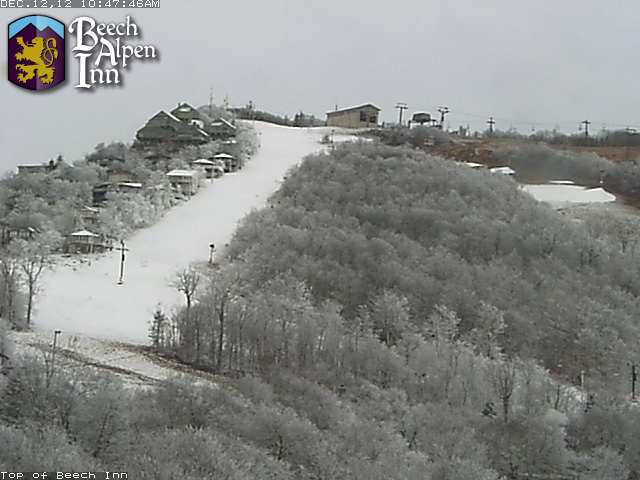 What a difference 24-48 hours has made. Heck, even 12 hours has made a pretty big difference. It actually looks and feels like December 12th outside now. Based on the webcams, I think just about everyone here in North Carolina made snow last night. The only one I'm not positive of is Wolf Ridge and that's because none of their cams are working right now. Sugar and Cataloochee remain the only two open though but that will change in the next few days. Beech is planning on opening Friday and my guess is that App will open this weekend too. Both places look like they'll be able to make snow tonight and tomorrow night so I'm betting on both being open for the weekend.

The ski areas in West Virginia are laying down snow this AM as well. Winterplace is cranking out some manmade goodness and they have an anticipated opening date of December 14th. That's this Friday! Timberline is joining in on the action as well and they too are scheduled to open this weekend. Actually, they are planning on opening tomorrow depending on the weather. I don't really know too much about Timberline but I wouldn't be surprised to see them hold off until Friday though to allow for more snowmaking.

I can't tell what's going on at Canaan Valley Resort. There is snow on the ground and they are saying they've seen a half inch of snow in the past 48 hours (I guess this applies to Timberline as well). However, I don't see any snowmaking taking place but then again they don't open for another week and a half. I can't wait to get the new cam installed up there and then we'll have a much better view of things. 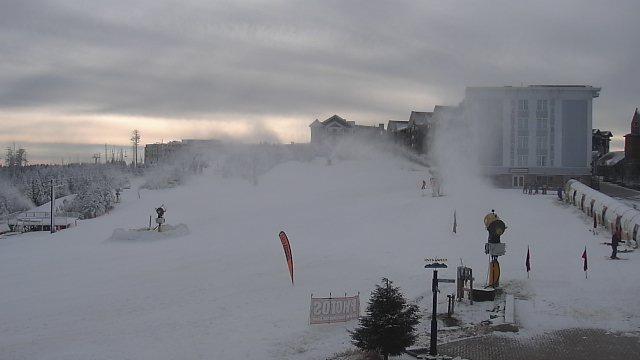 Snowshoe continues to lead the way with 13 open trails and 5 lifts. If you want to see what things look like up there, you now can! Two of the new cams up there are running this AM, albeit at a less than desirable level. The Boathouse Cam and the Shaver's Centre Cam are currently showing images that update every 4 or 5 seconds. I don't know why, but their IT guy and I cannot figure out how to get the video stream to get through their network. It is pretty frustrating but I know we'll get it figured out soon. In the meantime, you can check out the cams and hopefully they will tide you over until we can get the streams going. I figured these images are better than nothing for the time being.

Up into Virginia, Massanutten looks like they made some snow last night. How freaking sweet is that new base cam? I think it's one of my favorites that we have. I'm hoping to get out to Massanutten over Christmas break as I'll be only a couple hours away in Northern Virginia. I've never been there before but I really want to try it out.

Bryce Resort looks like they too tried to make snow last night. I don't think temps were all that great though so they were only able to lay a little bit down. On a random note about them, their new website is pretty nice. It's much improved over the old one and in particular, the snow report page is a huge upgrade. It'll make it much easier for me and Tonette to get info in the mornings.

I'm not sure what's going on at Wintergreen and The Homestead. Wintergreen's camera is showing bare slopes so it doesn't look like snowmaking took place. The snow report hasn't been updated in a little over a week so I don't want to speculate on anything. We're still waiting on The Homestead's camera to go live so we can have a better view of things up there. No word on snowmaking or an opening date there either.

In general, the Virginia ski areas will have sub-freezing temperatures the next few nights so it'll be interesting to see how much snow they can lay down. I'm guessing Massanutten will probably be the only one who will try and open for the weekend, but I wouldn't be surprised to see them hold off as it looks like next week might see natural snow…more on that in a minute. 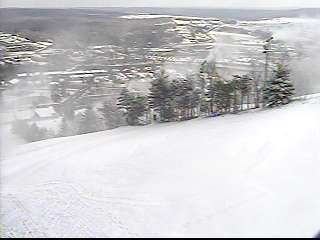 Finally, the two remaining areas to talk about are Wisp and Ober Gatlinburg. Wisp is reporting a half inch of new snow and they having been making snow. The Squirrel Cage cam looks pretty good this morning!

Wisp is looking pretty good this AM! >>>

Ober Gatlinburg continues to offer tubing sessions on a daily basis. They state on their site, “Colder weather is forecasted and we will begin making snow on the slopes as soon as temperatures permit. “ They may not have any open slopes right now, but if you're into tubing than it appears that is the place to go.

As for the weather, it looks like we could see things turn around next week in a big way. A significant storm looks to bring natural snow to the region beginning on Wednesday. Brad Panovich talks about this in his latest video forecast. It's nice to have Brad back again!

The two main models that forecasters here in the US look at both show an interesting setup that could bring significant snowfall to the ski areas. We need it! This would come at a perfect time too as it would help kickstart things for the holidays. I think the ski area managers are hoping and praying this pans out. It's still over a week away so we'll have to keep an eye on it. Cross your fingers!

That's it, that's all for today. Enjoy the colder temps and remember you can check out the snowmaking at the ski areas across the region on Resort Cams. We've got just about every ski area covered!  Over and out.