Inside Big Air at SunTrust Park 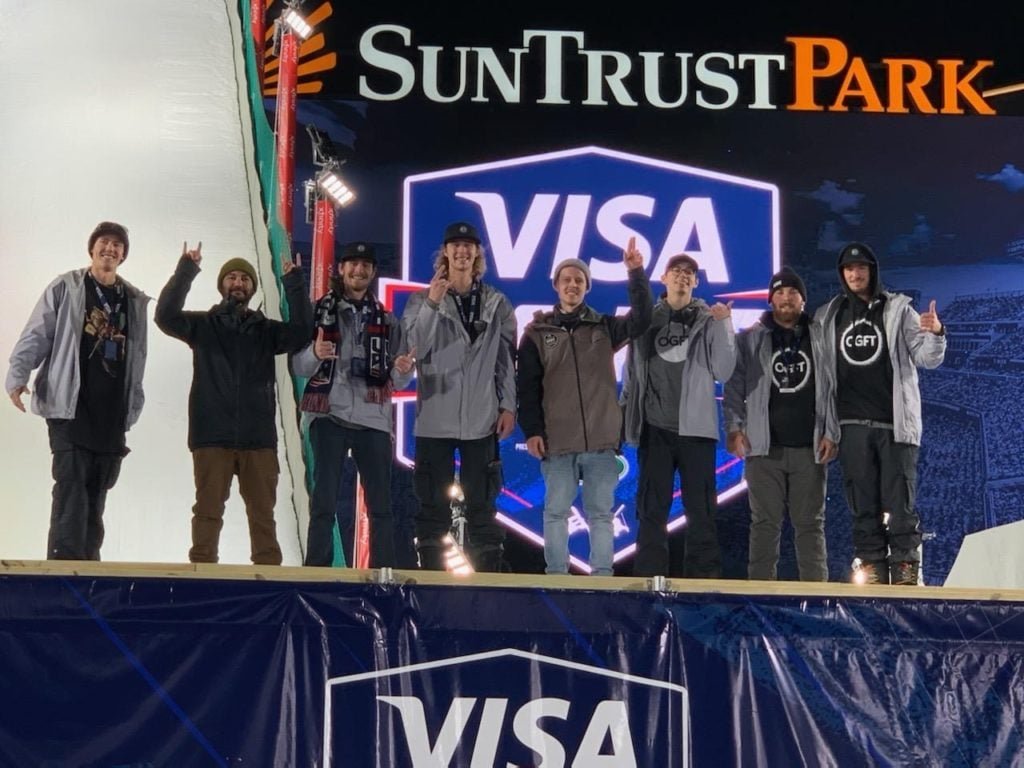 The Ober Gatlinburg family had a big-hand in the Visa Big Air Competition in Atlanta a couple weeks ago. Ober Gatlinburg’s Tom Royther provided this blog post to Ski Southeast detailing the behind-the-scenes of the event.

Ober brought 23 employees to Atlanta for the nationally televised Visa Big Air Competition at SunTrust Park. Ober Gatlinburg became the Premier Mountain Sponsor for the event and represented skiing in the Southeast at the biggest on-snow event the Southeast has ever seen. The 10 Shapers, 4 Snowmakers, 6 patrollers, and 3 Marketing Representatives that Ober Gatlinburg provided headed down to Atlanta to spread the good word about skiing in the southeast and work hard to put on the Big Air Event.

Ober’s shapers and snowmakers reported to SunTrust Park in Atlanta the Monday before the event and immediately were put to work on learning about all the equipment we would use that week. From safety briefings about Nitrogen gas, to exactly what steps needed to be completed for the Big Air Jump to be perfect for competition. Our snow crew helped to take apart the “burrito” tents that utilized 50 Nitrogen gas trucks mixed with air and water that created the snow that laid on the jump. These tents were taken apart on Tuesday our shapers were allowed in to shovel and groom out the mounds of snow created in the burritos. Our snow crews used every minute of Tuesday afternoon- Thursday morning to groom out the jump. Our crews were winching heavy snowblowers, grooming using crampons, and grooming using repelling ropes that were strapped to the top of the jump. The 15-story jump began construction on November 26 and formed a 70-foot gap from the lip to the knuckle landing, made of scaffolding and even had an elevator!

Our Volunteer ski patrollers helped to keep the slopes safe and create a quick transition from injury to treatment for the athletes competing. The safety was amazing and with the help of our patrollers, no one was seriously injured during the event. Of course, we did see plenty of falls, but those were handled in a timely and correct manner by our snow safety professionals.

Our Marketing team was hard at work getting Ober’s logo on TV as well as representing in the Battery outside of SunTrust Park. Thousands of spectators were able to gain knowledge of what Ober is all about.  We met season pass holders from Alabama and Georgia and heard plenty of stories about first-time ski trips, annual trips to Gatlinburg AND those who didn’t even know Skiing in Tennessee AND the Southeast existed.

One particularly funny moment came while it was raining, and our crew was hard at work shaping the jump. We kept getting comments such as, “does this make your life harder? How are you all not melting?” to those comments we would smile and reply “This is just another Thursday in the southeast!” The optimism was contagious, and our crew did not skip a beat despite unfavorable shaping weather. The athletes, coaches, and event staff alike came up to our crews individually to thank us for all our hard work. We are so proud to receive such gratitude for something that a lot of our team truly love and would do for free to be a part of Big Air.

We are skiing in the Southeast. We are the MOST optimistic Ski Areas in the industry.  When you think we can’t make snow or our crews can’t compare to that of a big mountain, we prove you wrong. Ober Gatlinburg is so proud to be in association with such an amazing event for Snowsports and growing the culture even more!

Previous Post
An “Ugh” Thursday… But Winter Returns This Weekend
Next Post
WILL WE EVER SEE A NORMAL WINTER AGAIN? OF COURSE WE WILL…