I’m Cracking on Cell Phones, Apps and More Today – as well as Steve Wilhelm, whoever he is!

SkiSoutheast.com / Snowshoe Summit is next weekend! Come Join Us.

Snowshoe’s reporting that they are looking at being able to make snow tonight and every night leading up to next weekend’s SkiSoutheast / Snowshoe Summit and since they are already looking GREAT with 57 of 60 trails available – that means that we should have some pretty awesome conditions for the three day winter celebration. Things haven’t been as awesome as we’d all like this winter so if you’re reading this from down off the mountain in your home town – where it’s nearly 60°, do us a favor and tell your buddies that we have plenty of snow at all of the ski areas and that we’re in for a super weekend next weekend.

Snowshoe is giving YOU and anyone else that will come and hang out with us 25% OFF all lodging as well as a FREE SUnday Lift ticket. We’re doing a FREE Apres Ski Party Saturday night and we’re adding some fun to the plans as well as giving everyone who comes a FREE SkiSoutheast 2012 Summit Tee shirt. So jump over to the SkiSoutheast Summit pages or the Messageboard and join us. Being a MEMBER of SkiSoutheast and SkiNorthCarolina is FREE and membership DOES have its priveleges!

Go look and sign up to JOIN US!
https://www.skisoutheast.com/2012_SkiSoutheast_Snowshoe_Summit.htm

THERE’S AN APP FOR THAT… but is it REALLY worth the screen it shows up on?

I hate cell phones. People who know me know that I’ve said – repeatedly – that I think they are the worst invention ever created by man, or Louis Eugene Wolcott or Louis Farrakhan or whoever really came up with the idea. It HAD to be someone who really hates humankind and wanted to create something that would APPEAR to keep everyone connected in unparalleled ways while in reality making it such that we’re REALLY never communicating with each other anymore.

I could go off in a seemingly irrelevant direction so I’ll rein myself in and tell you where the heck I’m going with this point.

After owning one for about as long as they’ve existed and possibly using mine less than a newly signed up teenager does in their first DAY, mine is growing on me. Before anyone who cares about me suspicions that aliens have abducted me or that I’ve gone over to the dark side – I will NEVER be like most cell phone users. If you have a look in my direction you’ll see me without one FAR more often than you might catch me with it in my hand. However, mine had a chance of growing on me if for no other reason than the weather apps.

For someone like me who has to have an eye on the weather, it is cool to be able to quickly thumb through numerous destinations and be able to tell within MAYBE eight seconds that it’s:

THE PROBLEM IS …that those temps are more wrong than correct.

Let’s go have a look around the region…

(I’m skipping around this morning as I’m easily bored.)

Snowshoe Mountain – 12° – 1" of new snow – Made Snow and they have a packed powder and frozen granular surface with 57 of 60 trails open. 94" of snow on the season and a base of 20-40". Upper Shay’s was winched overnight, and a few trails were left ungroomed. Enjoy those moguls! Groomer’s choice today is Camp 99.

Appalachian Ski Mountain – 21° low this morning – They and our stations are reporting 27.8° as of this report while my sweet little phone app is reporting 23°. Nope, it’s 27.8°. They saw flurries in the last 24 hours and are 100% open with all terrain parks and ice skating as well. Check out the LIVE CAM at http://www.highcountrywebcams.com/webcameras_AppSkiMtnLIVE.htm

(You can’t get ALL THAT at one glance with a cell phone and know that the information you’re reading is accurate.)

Massanutten Resort – they had a low of 18° overnight and made snow like crazy. They are at 33.4° as of this report (while my not-so-trusty app says it is 29°). They are open with 10 trails and 10 tubing lanes and awesome looking snow this morning.

Cataloochee Ski Area – 37° low this morning and 47.5° right now according to Cat and our own weather center – although my app says it’s 22°. Good grief that’s 25° difference. Cat is open for day sessions only today and 15 of 16 trails open and tubing. Conditions are sweet this morning. Cat is MAKING SNOW right now so NONE of the temperature readings are accurate. So MAYBE it is 22°.

Timberline Resort – 12° and groomed powder on 31 of 40 trails for day sessions. They are looking sweet after 6.1" of snow has fallen in the last 48 hours! Man CHECK OUT the piles of snow via http://highcountrywebcams.com/webcameras_timberline.htm

Bryce Resort – 33° – my app says 31°. They are 100% open and boy does their slopes look AWESOME this morning! They know how to do some sweet corduroy grooming. Check it out at http://highcountrywebcams.com/webcameras_BryceResort.htm

Winterplace Resort – 18° – Made and are making snow with 25 of 27 awesome trails open for day and night sessions. Tubing and terrain parks are all in great shape as you can see via http://highcountrywebcams.com/webcameras_winterplace.htm

The Homestead Resort – 22° and making snow and they have 5 trails open and tubing as well.

Sugar Mountain – 33.7° according to Sugar and our station data while my Android/Motorola app says it is 23°. Wow that’s 10° off. Okay I guess I’m now a cell phone guy after all. Whew!

Sugar has 17 of 20 trails open, tubing and ice skating and a BIG Spyder sale going on.

(Try getting all that without clicking around for 15 minutes on your cell phone.)

Hey, check out http://highcountrywebcams.com/webcameras_SugarSki.htm  as Sugar is making snow up top at 33.7°. 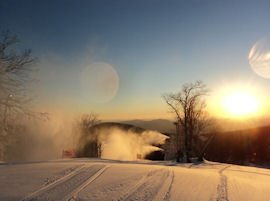 <<<<Check out this gorgeous photo from yesterday!

Wisp Resort – 16° – made snow and they look awesome with 23 of 32 trails open til 5pm. Snow tubing and terrain features look great.

I’m out of town visiting my beloved parents this morning and when I logged onto my trusty laptop to do this morning’s update I found that one or both of our ski/video servers were frozen since late last night. That is not SUPPOSED to be able to happen as we have sweat-shop-gerbils that work 24/7 with alerts and protocols that are in place to catch things like that. On the rare times that they happen, they are supposed to see them and reboot. Somehow that didn’t happen and we were down overnight.

Some yahoo that will go unmentioned by name wrote, "I logged on to your webcam site to look at the cams and either everything was running slow as Christmas or wouldn’t come up at all. I don’t know what kind of servers you guys are running but if this is the best you can do, then this website sucks."

Well THANKS for that input Steve Wilhelm from Statesville, NC. (I didn’t just do that did I? NO, I really didn’t. I change his last name to keep myself from being sued. But I got you guys for a minute didn’t I?)

This is the second time this has come up in the last couple of weeks. During last week’s first decent snowfall in a while, we had numerous television stations showing off our cams at one time. That’s BOTH a good and bad thing. It’s great to get the publicity, but none of these Streaming Cams are meant to handle a gazillion visitors at once…especially at the height of a storm.

The COOL thing is that we learn so much everytime things like this happen. We’re now adding MORE cams than ever and I challenge anyone out there in internet-land to find me ONE webcam, weather or ski related website any nationwide that is showing the kind of high-rez imagery we’re showing, with our traffic and delivery.

With our growth we’ve figured out a pretty cool system and within another couple of weeks we’ll not only be able to deliver the quality and scope of our webcam offerings, but we’ll be doing it on an ever faster system that should minimize glitches.

That said, since Steve and anyone else can log onto our website for FREE and see more than 80 live shots from all across the Southeast and Mid Atlantic in ways that are unmatched by any other website we’ve seen…I’ll say we’re doing okay – for a website that sucks.

Previous Post
It’s WINDY. It’s COLD…and there’s some Natural Snow to Talk About!
Next Post
Can’t Get Enough of this View that Shows a lot of Snowmaking Happening at Cataloochee this morning! Click to Enlarge