HOW DOES A CLOSING WEEK AND PERHAPS SIX TO ELEVEN INCHES OF SNOW SOUND!?!?! 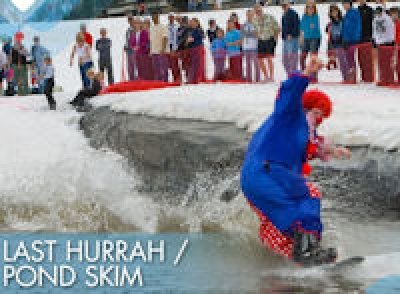 Some portions of the Southeast and Mid Atlantic are already getting some snow, mix, sleet and freezing rain mix this morning. As of this post – it can't decide what it wants to do here this morning as all of the above has fallen from the sky. An hour or so ago there was moderate to heavy rain falling and NOW the ground is white from  a light snow.

The forecast for today is ALL OVER THE PLACE with some forecasting little in the way of accummulations for the High Country for today…but as much as 2-6" between now and Wednesday. Others are forecasting significant snows around 6" for most of the area with locally higher amounts around 10" or so at Beech (which is now closed for the season) and Sugar Mountain – which will ride through Wednesday of this week or perhaps another day or two past that.

The snow-hoarding West Virginia mountains could see 2-4" today; 3-7" tonight with additional snow showers every day through Wednesday of this week! Lord only knows (literally) how much snow will fall up that way. It sounds as though this snowfall event COULD just put Snowshoe over their average annual snowfall of 180" as right now they are at 169" and counting.

Timberline is on 202" of snow thus far this season and with all of this snow coming in – THEY could be the place to be if you're a snow hound.

WHEN WILL IT ALL END? WHAT WILL BE THE LAST DAY OF SKI AND SNOWBOARDING SEASON? 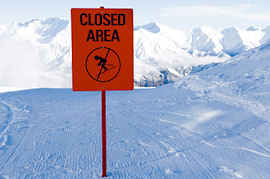 That IS the question that I have received most these last few days. There are MANY emails in my inbox telling me that with all of this snow still on the ground and with more falling – won't there be some ski areas that will ski and ride into April?

The answer: ONLY ONE if things hold as they stand right now. That lone ski resort might surprise you. It is Wintergreen Resort in the Commonwealth of Virginia.

Every other ski area in the region is either ALREADY closed, or closing sometime between TODAY, WEDNESDAY, FRIDAY, SATURDAY or SUNDAY of next week!

I know how confusing that was just stated, but I've provided the deets below so there can be no confusion!

Today is NOT the last day of the 2012-2013 ski and snowboarding season although it has a distinct feel of that. It IS the last day of the season for more ski areas though. Beech Mountain Resort called it quits on Saturday and that move could be looked at as brilliant if you're looking out your window this morning. This morning's moderate to heavy, soaking, snow-melting, rain is actually THE FIRST rainfall that I can remember of the entire season for a Sunday…and possibly even for a weekend. I'm certain there was a bit of rain earlier in the season on a weekend, but as I've detailed more than once this year – this HAS been an almost "perfectly timed" season in terms of having great weather for all of the important dates such as the Holiday ski week, MLK Weekend, President's Day Weekend and all of the important mid, peak season weekends.

We've had plenty of snow and lots of cold temps most all of the season and when it wasn't – that usually occurred on a Monday-Tuesday-Wednesday. Seemingly every Thursday or Friday we experienced slopes-saving cold air and snowfall to inspire the masses to visit the slopes.

Obviously the season got off to a ridiculously slow start with the Christmas-New Year week looking like it would be in jeopardy as mild temps and nearly no snow fell in November and December across the region. However once we hit late December things got cranked up and we've had what most every ski resort management team would tell you was/is a VERY strong skier-visit season. 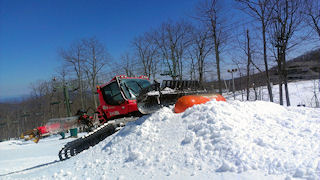 …There's PLENTY of snow still on the mountain at Wintergreen despite the challenging winter weather patterns for most of the state.

It has certainly been a rather challenging one particularly for the Virginia and Tennessee ski areas in terms of having to work with less cold and snow than their counterparts in West Virginia, Maryland and the North Carolina High Country. (NC resorts over in the westernmost part of the state such as Cataloochee, Wolf Ridge and Sapphire had below average snowfall totals and some borderline temps again this season – but made the most of it with great snowmaking and maintenance teams. Cataloochee would win the "atta boy" award this season for maintaining the best conditions in that part of the state by keeping the entire mountain open nearly all season long despite those aforementioned more challenging weather patterns. Wolf on the other hand managed those same conditions by never opening more than half of the mountain this season.)

HERE ARE THE CLOSING DATES FOR THIS SEASON ACROSS THE BOARD:

Wintergreen Resort in Virginia says they will ski and ride weekends through April 6th.

Here's what we know:

TAKING ANOTHER TOUR OF THE SOUTHEAST AND MID ATLANTIC: 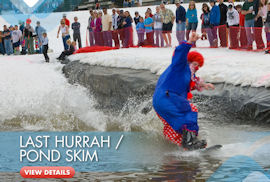 SNOWSHOE MOUNTAIN:
Snowshoe looks almost in mid-season form after a little snow in the last 72 hours and they will ride on 40 of 60 trails and they have extended their season until Sunday, March 31st. Snowshoe has tubing, night sessions and all sorts of fun on and off the mountain. This is a GREAT time to find super savings around the Village shoppes as well. Also bear in mind that Snowshoe could see up to 11" of snow these next few days!

Snowshoe will end their season with their annual Pond Skim. They wrote, "Another season has come and gone. Pay your respects to an amazing winter and have some fun doing it! Wear your best beachware and try your luck on the pond skim. The Easter Bunny will also be visiting, so bring the little ones out for a photo and egg hunt."

A foot of snow, great conditions and on mountain fun. What a way to close the season!

TIMBERLINE RESORT:
I have to give props to my man Tom Blanzy at Timberline in this "second billing" spot today as they are riding today for DAY SESSIONS on all 40 of 40 trails. I still maintain that this is the best trail report in the region. Check this out: http://www.visitcanaan.com/timberline/snow-report-spreadsheet.html

Anyway Timberline will ski and ride ALL THIS WEEK and then close Sunday, March 31st for the season. What a great season it's been with 202" of snow and more coming today!

APPALACHIAN:
They will close their season down after Sunday's sessions which includes DAY SESSIONS ONLY today. They have a lot of fun planned with their annual "Meltdown Games", but I'd call ahead as it's raining pretty steady right now. The snow is plentiful and they are 100% open with all three terrain parks, ice skating and all slopes…but with today's forecast, some of the fun planned may be curtailed.

CATALOOCHEE:
They are open for DAY SESSIONS ONLY for the rest of the season and they have 14 of 17 trails open today. Cat will ski Mon-Friday this week and then close FRIDAY, MARCH 29th. Tammy Brown wrote, "Cataloochee Ski Area’s closing date for the 2012/13 season will be Friday, March 29, 2013 at 4:30pm. This marks Cataloochee’s 148th day of skiing and riding for a record breaking number of days skied for the area."

I don't know WHY that doesn't seem accurate, but these guys are honest to a fault so we'll pass that message on. Their closing date for this, there 52nd ski season will be Friday (Not Sunday the 31st…)  Cataloochee opened the season on Halloween  day, 2012.

SUGAR MOUNTAIN:
Ski season "ain't" over til Gunther says it's over. Sugar is operating for DAY and NIGHT sessions on Sunday with 19 of 20 trails available and there's snow tubing on five lanes if ya want it.  Sugar posted, "Expect Sugar's slopes to stay open through at least Wednesday, March 27th, maybe longer."

So they too are potentially going to close for the season and NOT ride into the weekend. Many readers have emailed me speculating that Sugar would ski and ride not only NEXT weekend (Saturday and Sunday) through the 31st but beyond that. Not so much according to their post.

As I drove past Sugar a couple of times on Saturday the snow up there was beginning to degrade as you'd expect this time of year and there were some thin coverage areas beginning to expose themselves. This expected snowfall coming in tonight through Wednesday will "pretty things up" for the closing days at Sugar which MAY be Wednesday.

BRYCE RESORT:
They are 100% open for Sunday with skiing, snowboarding and tubing operational. Bryce will close during the week this week and then reopen for their final day of the 2012-2013 season on Saturday, March 30th. So they too will NOT be open on Sunday, March 31st to get a head start on Spring and Summer activities.

THE HOMESTEAD RESORT:
They played on 7 of 10 trails on Saturday and will do the same today, then close for the week and reopen, weather permitting next Saturday for their last day of the 2012-2013 ski season.

WINTERGREEN RESORT:
They are open today with 25 of 26 trails available. Here's the insight on Wintergreen's plans for the rest of the season. Needless to say that the new owners are playing aggressively! They posted information on their site that makes it SOUND  like they got 5" of snow last night. That's not the case. They are EXPECTING up to 5" of snow this evening and they are excited to be able to ride until APRIL 6TH!

WINTERPLACE RESORT:
They are in near mid-season form right now with 100% of their terrain open. That's 27 of 27 trails and they have extended their season to be open through SATURDAY, March 31st. Snow is in the forecast so closing days could be some of the best!

WISP RESORT:
They are open with 29 of 32 slopes and trails; ice skating, snow tubing, mountain coastering and ice fishing on the frozen lake if you want to! Wisp will ride daily through next Sunday, March 31st and close for the season…opening up their popular Deep Creek Lake for even more to do for Summer fun.

Beech Mountain Resort closed after Saturday's sessions. They posted this that we wanted to pass along, "Beech Mountain Resort is closed for the 2012-2013 winter season. Please continue to check the website for daily updates regarding summer operations and improvements. We want to express our sincere appreciation to our loyal customers, for helping make such a wonderful season."

Beech received 101.5" of natural snow this season and is likely to get more snow over the next few days. That is some 20" more than average.

That's going to do it for me today. I'll plan on Tonette and Kenny giving you the guided tour daily this week and then next weekend I'll wrap things up for us here at SkiSoutheast.com and perhaps I'll provide some closing rants and raves that are on my mind. It depends on what kind of mood I'm in.

Email me if you have any beefs, photos, kudos or images and what not: