Holiday Skiing is Past; Weekday Rates are in force; Great Conditions Abound! 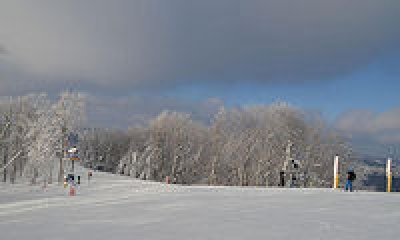 SUB TITLE: Good conditions for the next 10-12 days. Go play on them before any January thaw comes. (You know it will!)

I've seen Herb Stevens' West Virginia Skier's Forecast and now Brad Panovich's Ski Resort forecast for the entire region and the synopsis of both is that we've had a run of GREAT weather and some snow to put the ski resorts into the best condition we've seen them thus far this season.

We've now had about 36 hours with no snowmaking across the region and some resorts dropped their bases an inch or so but with a foot and a half or more of snow on the slopes things are in very, very nice shape. (Some ski areas ARE making snow this morning! Check the snow report!

Before I get further into the forecast, the all important Christmas to New Years week is now all but over as the last of those travellers will be packing up and heading home. Count yours truly among those as I post this last update from Snowshoe Mountain before I trek south back to my beloved mountains of Western North Carolina.

Yesterday was an awesome day to be on the slopes. It might not have ranked up there quite as well as a few of the POWDER days I've enjoyed this last week, but it was great nonetheless. Cupp Run was awesome with heavy powder that was leftover from the days before. Snowshoe has seen 3.5 feet of snow in the last two weeks and change and that – combined with dedicated snowmaking – made for some very nice conditions to ride on. Visibility was an issue most of the day here at Snowshoe and around the region at various resorts on Tuesday due to a light, misty, freezing drizzle/snog (snow – fog) that blanketed the area and here at Snowshoe all day and into last night.

However, I could not have asked for better weather for our particular ski trip and I and 17 family members and friends (who are my extended family) had a ball. Hopefully I can make some new friends and see some of you on the slopes at many of our great ski resorts in the coming days and weeks.

NOW BACK TO THE WEATHER FORECAST ACCORDING TO BRAD: 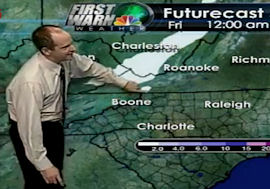 He's reporting on a little snow falling this morning, and then over the next seven days he's expecting COLD AIR to funnel into the region. He's calling for perhaps another 2" or so of SNOW for the West Virginia and Maryland ski resorts into Friday and perhaps an inch or so into the North Carolina mountains. Again the GREAT NEWS is plenty of cold temperatures for the next five days or so. He's expecting snowmaking temperatures right through this coming weekend and into early next week.

His forecast is also hinting that if you haven't made it to the slopes yet this season you should do so over the next week or so as we will see a bit of a mild up around the middle of January that will probably last a week or so. That is the January THAW that we all know will happen each Winter.

See his entire forecast at: https://www.skisoutheast.com/video-forecast.php

We want to thank Brad Panovich for his studio quality skier's forecasts and also Herb Stevens for providing his updates for West Virginia. We've posted 20 of their forecasts thus far this season and you guys are really using them for trip planning.

I saw Ed while over on Cupp Run on Tuesday doing his thing which is enjoying some product testing WHILE on the job shooting and creating some awesome videos for those of us who enjoy watching them from Snowshoe Mountain. You can see Ed's latest video which offers a compilation of really good skiers and snowboarders enjoying DAY ONE of Cupp Run being open.  See that video at: https://www.skisoutheast.com/videos.php

Some SNOW fell across the upper tier of our ski resort coverage with WINTERPLACE reporting 2" (the most) from yesterday. From 1-2" fell at Canaan, Snowshoe and Timberline resorts. Wisp uncharacteristically didn't pick up anything from the last 24 hours. Several of the ski are are MAKING SNOW this morning with the coldest temps recorded up at Wisp with 14°.

Conditions are pretty sweet across the region so get out and enjoy them while they're here. As Brad Panovich suggested we have a GREAT window of nice conditions going on right now from today through the next ten days so go get 'em!

CANAAN VALLEY – 21 of 42 Slopes Open
Canaan added several new trails for riding today. They've seem 10" or more of snow in the last four days including a TRACE on Tuesday. At 22° this morning they are making snow. Open only for Day Sessions today.

SNOWSHOE MOUNTAIN – 43 of 60 Slopes Open
Snowshoe saw another one inch of snow in the last 24 hours and their conditions are just awesome. What the heck are you waiting for!?!?! Go ride the Shoe!

APPALACHIAN – 10 of 12 Slopes Open – Ice Skating
All slopes are open with the exception of Hard Core and Thin Slice. App has their popular Shred for the Cup Rail Jam event happening this Saturday. Stay tuned for more information and for now click over to: https://www.skisoutheast.com/events.php?view=d&id=507&m=1&y=2013&d=5

BEECH MOUNTAIN – 11 of 15 Slopes Open – Ice Skating
I THINK BEECH IS MAKING SNOW THIS AM at 27°! Weekday pricing begins today! The LIVE CAM is working as well! A lot of you asked about that and I know it was out for a day or so, but they seemed to have figured out where the grimlins were. That thing is showing some awesome images. Check them out at: http://www.resortcams.com/webcameras-beech-base-cam.php

CATALOOCHEE – 13 of 17 Slopes Open – Snow Tubing
Cat has dropped two trails that were open on Monday and Tuesday for today.
They are in great shape however and plan to make snow whenever possible and get more terrain open.

SUGAR MOUNTAIN – 13 of 20 Slopes Open – Snow Tubing & Ice Skating Open
Sugar dropped one trail from yesterday's opening count but they are making snow this morning at 27°.

MASSANUTTEN RESORT – 8 of 14 Slopes Open – Ice Skating and Mega Zip
Mass is making snow as well at 30° this AM.

CHECK ALL of the resort conditions at: https://www.skisoutheast.com/skireports.php

Look for Kenny or Tonette's report on Thursday as we get back to the swing of things for the New Year.