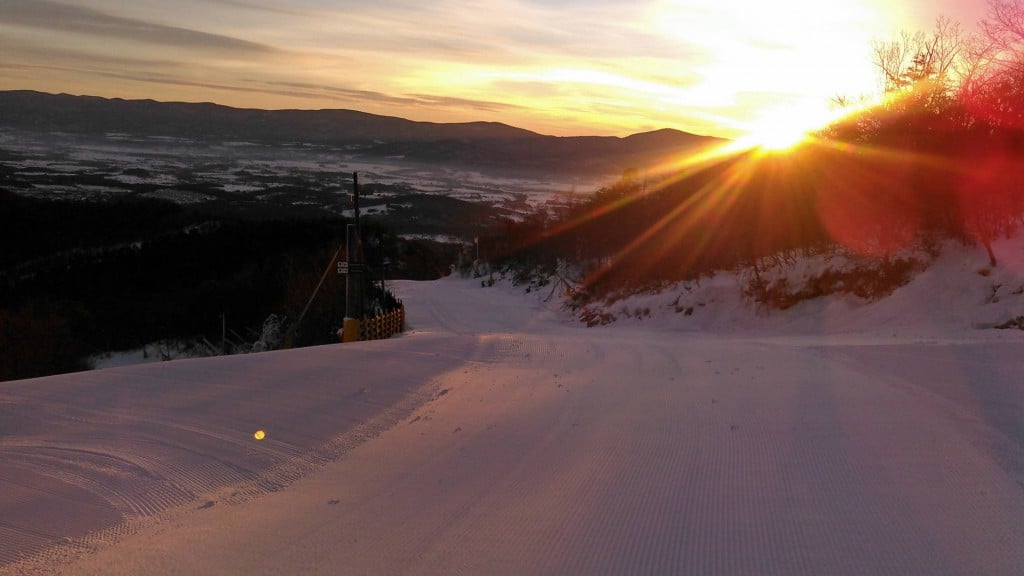 Massanutten is usually associated with heart-pumping adventure and entertainment opportunities like skiing and snowboarding, mountain biking, zip lining and even an indoor/outdoor waterpark. But the resort also features a number of relaxing amenities as well, like yoga classes, hot tubs and luxury spa treatments. And it was this same lure of relaxation and rejuvenation that actually helped to found the resort in the first place.

In the 1800s, cities were often crowded, dusty and plagued with poorly maintained water and sewer lines. Disease spread quickly in these areas, and city-dwellers often sought respite in nearby valleys. In 1875-1878, a man named Gerard Hopkins capitalized on this phenomenon by opening a health resort in a valley outside of McGaheysville. Named Rockingham Springs, the resort promised rest, relaxation and restorative health benefits found in the water flowing from five nearby natural springs.

Rockingham Springs was comprised of a main hotel surrounded by smaller housing for long-term guests. Visitors were privy to a bath house, laundry house, ice house and stable, and were entertained by jousting, live music performances, croquet, horseback riding and hiking. 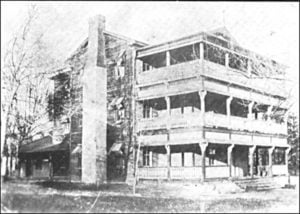 Rockingham Springs circa 1870s (photo with permission of The Villager)

Such is the history of Rockingham Springs and the legacy of Massanutten Village and Resort. Today, just as in the later half of the 1800s, the Massanutten Mountain, better known as “The Peak,” remains an oasis for those seeking the therapy of the mountains. Rockingham Springs was founded in 1878 by G.T. Hopkins, owner of 1,000 acres of rough and tumble mountain land that, to the average eye, seemed worthless. But to this entrepreneurial minded McGaheysville native, the wealth of mineral springs that dotted the Massanutten were a gift from Mother Nature.

With an investment of $10,000, Hopkins purchased the acreage and constructed a three story hotel, a lodging house and other buildings necessary to get the business underway. Thus was born the first resort to capitalize on the unique environment of the Massanutten. It was Hopkins’ fifth generation descendant, John L. Hopkins III, who would later join with other area businessmen to make Massanutten Village a reality nearly a century later. The drawing card for the resort then were the mineral springs, water reputed to have near magical powers of healing and continued health. Lengthy advertising brochures published by G.T. Hopkins to promote the resort targeted the city dweller who might suffer from just about any malady that could befall a human. By either bathing in or drinking the mineral waters, the sick could, according to advertising brochures, cure or ward off “malarial disease, asthma, diseases of the nervous system, neuralgia, scrofula, glandular enlargements, chronic skin afflictions, rheumatism, rheumatic gout, liver diseases, consumption, diseases of the bowels, dyspepsia, chronic diarrhea, hemorrhoids or piles, diseases of the urinary organs irritable bladder, fever and ague….”

Even if a guest didn’t suffer from one of the above, they could rest assured that the water would work miracles in other ways. “The water is a very pleasant beverage highly charged with gasses. It improves the appetite, promotes sleep, increases the weight and strength and causes the pulse to assume its natural condition,” one brochure claimed. Hopkins had the water analyzed by chemists with results published in his promotional tracts. Several doctors even included testimonials as to the curative powers of these mountain springs – all numbered for easy reference so that guests could match their particular ailment with the most beneficial mineral water for treatment. The springs, 12 in all, were located within about a quarter mile radius of the family hunting cabin that remains in the park area today. While most still flow, they are not as visible or have been altered by construction and blasting necessary to build Massanutten Drive.

The hotel was a hub of activity for the resort. Dances were held in the second floor ballroom every Saturday night and a “piano sing” was a staple at mid-week. Food was prepared and served on the first floor while the top floor was reserved for 30 guest rooms. Some 90 rooms were also available in what was called the “Long House,” a frame and log structure located nearby. An ice house, stable and residential quarters for servants were clustered about the hotel as well.

Most guests came from points north and G.T. Hopkins capitalized on the resort’s central location to major metropolitan areas – just as does Massanutten today. Advertising brochures assured guests that the resort was an easy, one day train trip from Baltimore, Washington and Alexandria. Guests could then catch a stagecoach or buggy from the stations in Harrisonburg and Elkton for conveyance to McGaheysville.

Many guests stayed an entire month at Rockingham Springs, paying $30 for room and board. Weekly rates were $8 and, by the day, a guest paid $1.50. Children and servants got a 50 percent discount and everyone could use the mineral baths for free. Food for the resort guests was grown or raised on nearby Cave Hill Farm, still owned and operated by the Hopkins family, the same family responsible for the modern day development of Massanutten in the 1970s. Activities, beyond soaking in the healthful waters, included lawn bowling and croquet, hunting and fishing, hiking, trail rides and even jousting tournaments. While a booming business during its day, the health resort business was destined to go bust and bust it did as leaner economic times hit the nation. The crowds dwindled and Rockingham Springs closed for good in 1915. One by one, arsonists set the buildings on fire, destroying the legacy of G.T. Hopkins and his fine health resort, leaving the grassy common area bare of the remainders of the bustling age gone by. Later generations of the Hopkins family grazed cattle and raised poultry on the site until 1968. Then John Hopkins began assembling the 5400 acres that would eventually encompass Massanutten Resort as we know it today.

While few similarities can be drawn between Rockingham Springs and Massanutten Village today, there does seem to be one quality that has not diminished over the years. The attraction of the Massanutten Mountain, for whatever reason, has remained strong over the decades. From G.T. Hopkins to Great Eastern Resorts, the Massanutten has always spun a siren’s song, enticing the strong willed to take a stab at making the resort business stick after all. Maybe G.T. Hopkins was right after all…it’s in the water.

The popularity of the resort eventually declined, and in 1915 Rockingham Springs closed its doors. The hotel was disassembled and all but 300 acres were eventually sold. 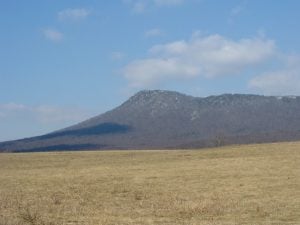 Gerard Hopkin’s great-grandson, J.L. Hopkins, sat at Gerard’s kitchen table and stared out a window that encased the spectacular view of nearby Massanutten Peak. As he contemplated the woes of being a farmer in the fourth year of a devastating drought, he decided that he would instead try to re-open the resort that his great-grandfather was forced to close.

Although property at the time was being purchased and preserved as state parks, Massanutten property was overlooked because of the overall disinterest in winter sports. J.L. was able to purchase 2,100 acres of land – which included the Kettle and the Peak of Massanutten – with the help of a silent partner for $325,000.

For the next three years, J.L. sought out additional investors and secured over 100 signatures for right-of-ways, leases and deeds. In May 1971, a press conference was held at Spotswood Country Club announcing the joint venture in the development of the Massanutten Resort.

By 1972, six slopes were cleared and a multi-level parking area was completed. Final touches were completed on the outdoor swimming pool and tennis course in 1973, and the ski area finally opened on February 10 after five continuous nights of snowmaking. 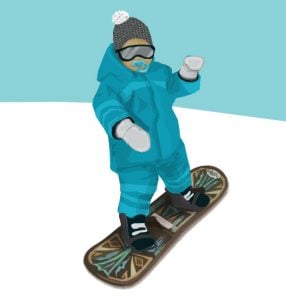 This year, the resort has put the finishing touches on a 7-million-gallon snow making pond, which will keep the slopes covered in fresh powder for the foreseeable future. It’s unlikely this water contains the same fabled “restorative” properties of the natural springs at Rockingham, but I’m sure skiers and snowboarders racing down the slopes experience a similar feeling of rejuvenation just the same.

Amanda Kundert
Amanda is a northeast Ohio native and graduated from Cleveland State University in 2010. Throughout college, she was a photographer, contributing writer and monthly columnist for a county-wide newspaper. After graduation, she moved to a small town in Iowa and worked for six years in the public relations department at a liberal arts college. In addition to writing hundreds of news releases, magazine articles and public service announcements, she is also an avid graphic illustrator. In the summer of 2017, Amanda relocated to Boone and joined the team at Appnet. In addition to writing, Amanda also enjoys baking, Netflix, and all types of artistry – painting, sculpting, embroidering, wood burning, sewing, etc. Although she’s a novice skier, she still makes it out to the mountains most weekends to go on hikes with her husband and German Shepherd pup.