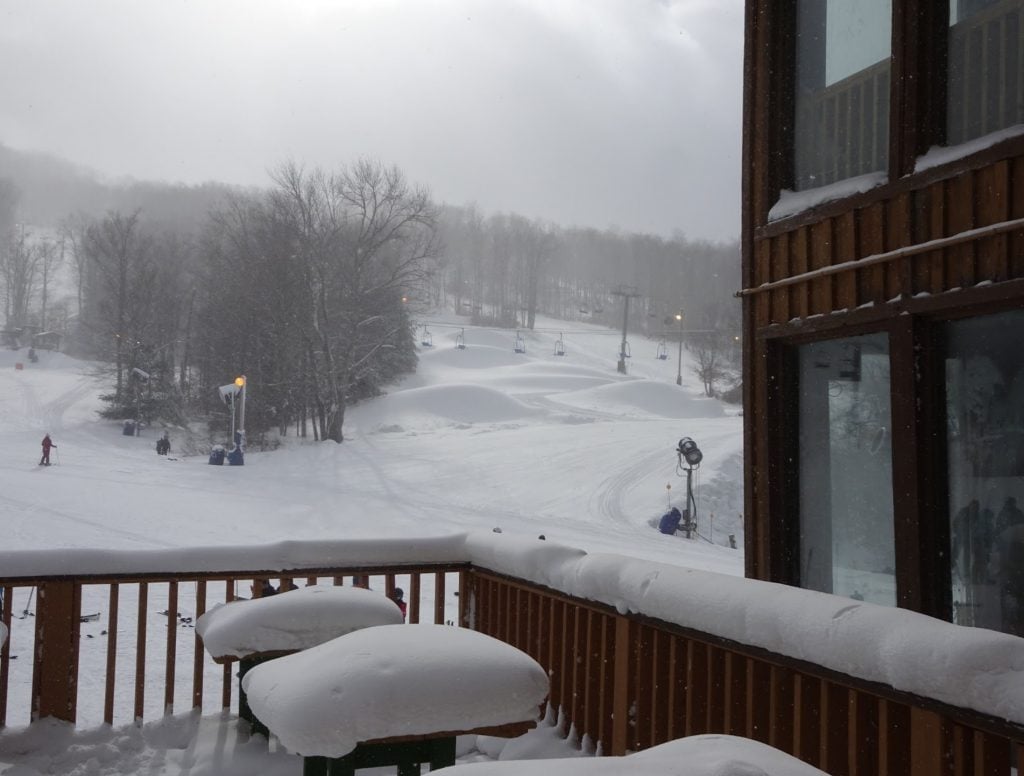 Pictures and Story by David McCue

It had been a little bit since I skied at Timberline, great to be back again. I guess I’m a homer (away from home) for the Canaan Valley, I’ll leave central North Carolina at silly early and return crazy late for a weekend up there. I headed up for opening weekend in December but Timberline only had a few lower runs open so I skipped it then but I’ve kept watching and conditions were more than right this weekend.

Cold? Well kind of, wind chill numbers were being thrown around as if it was a competition, “I heard It was forty below” …” I’ll see you forty and raise you ten to fifty below” …”My buddy told me that frozen pine trees at the top of Cabin mountain had snapped off and were blowing down the streets in Elkins.” This is the sort of chatter I was hearing this morning, but why indulge in hyperbole? This morning as I was unloading at the top by the patrol shack I was told their actual temperature was -14, don’t know how high the winds were but I know we were barely able to converse above them. It was somewhat breezy and brisk.

However I am ok with a touch of cold, I have pretty good gear, not fancy but effective. My greatest objection to extreme cold is that it has an unfortunate way of scaring any possible snowfall out of the air. Amongst the oddities of this extreme pattern was that the intensity of the cold had actually frozen the lake effect that I so eagerly chase. Still it was excellent, all the powder that has fallen over the last week is in tact and just gets moved around by the wind and drifted new and fresh each day.

Cold does keep down the weekend crowds, so there’s a nice side effect. Timberline kept the lifts running until 6 pm, I was done at five as was everyone else but those with an occupational interest. Again I was reminded that working patrol may not be so glamorous, and God bless the lift ops. 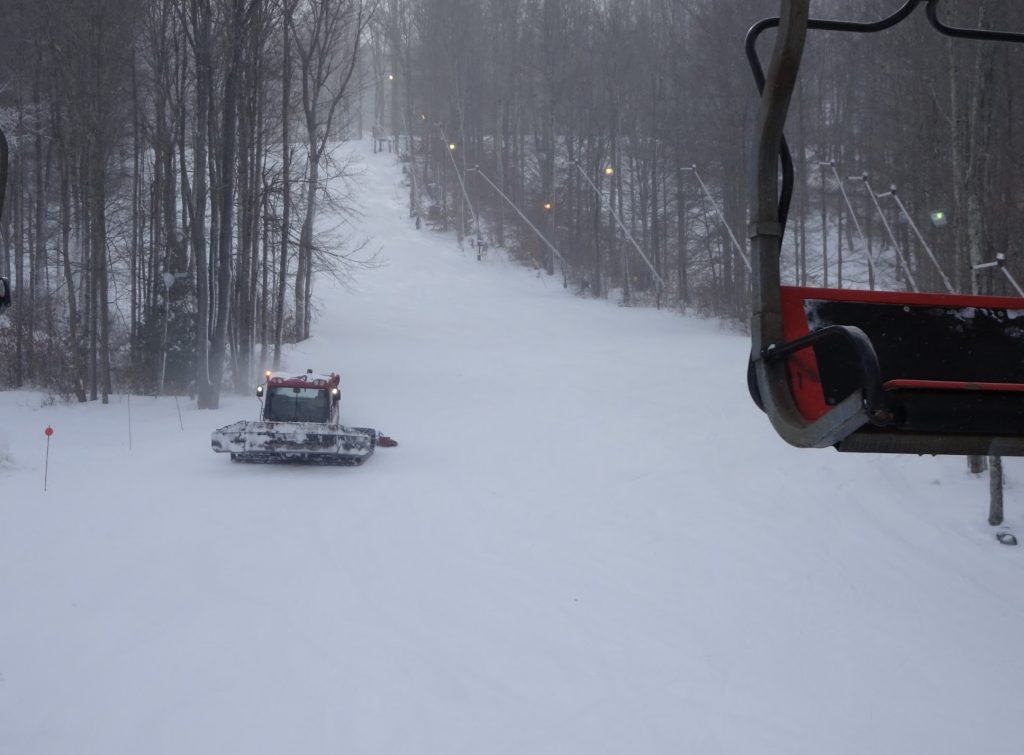 Off the Wall was open with its usual collection of crazy heart-stopping whales to drop in and out of with steep soft stashes all along the right side. 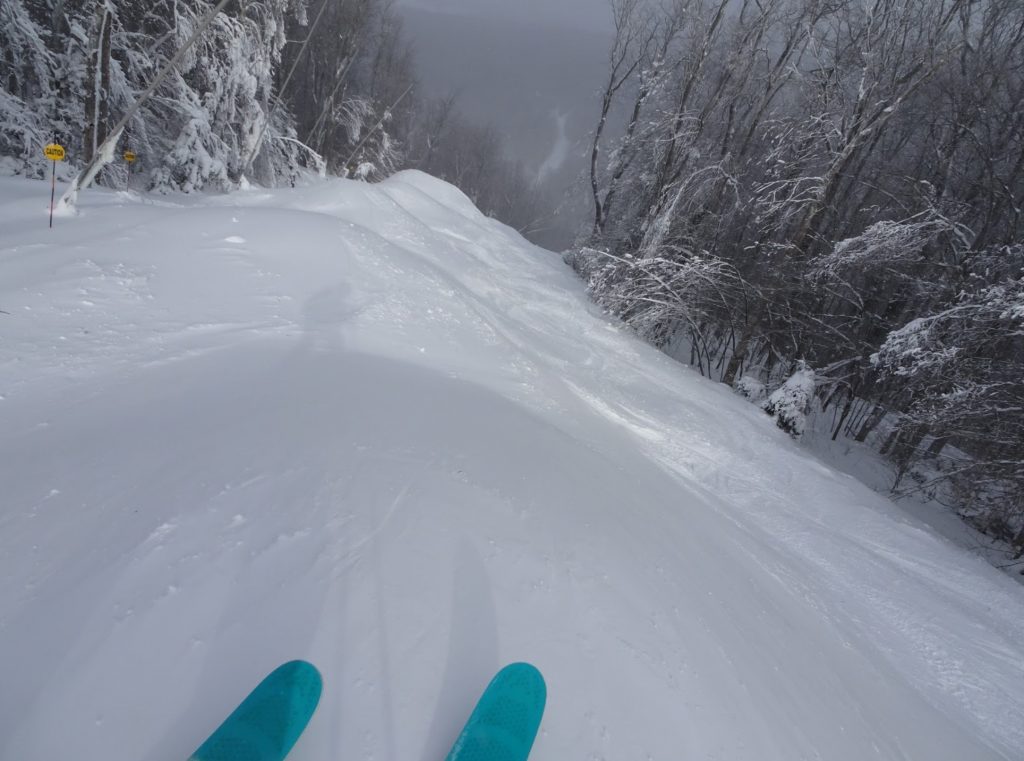 And I finally got to free my inner wood gnome, at some considerable expense to my ski bases. It was a chance I was willing and happy to take but be aware, this light cold powder is covering the rocks in the glades only in the most nominal way. Still it’s a good start and Timberline has the best in bounds tree skiing in the southeast and probably the whole mid-Atlantic. 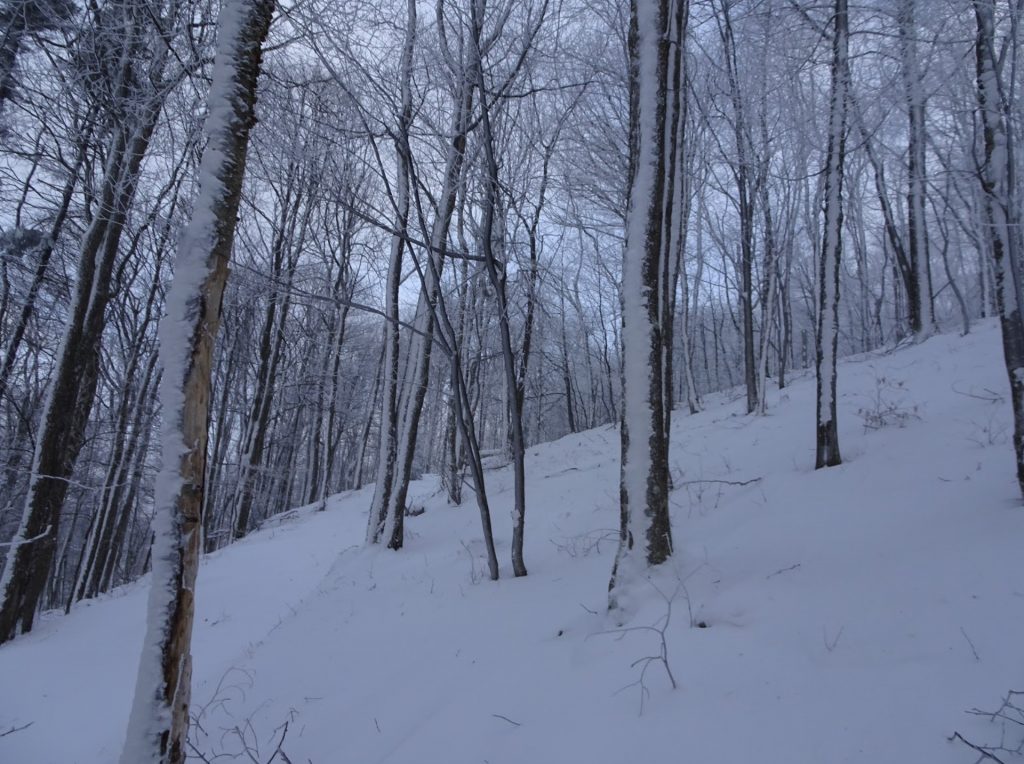 Timberline, Canaan Valley Resort and Whitegrass Touring Center are a a magic distillation, utterly unique and when they are all in good shape they each are better. Indulge me in a sports metaphor, I live in the triangle area of North Carolina so you know where this is going: basketball is best when Carolina, Duke and State are all at the top of their game; right now the whole Valley is strong. I’ll be heading to Canaan Valley Resort tomorrow morning and will earn some turns at Whitegrass before heading home.

By God, I love this part of West Virginia.

Previous Post
GRAYSON WHO? by Joe Stevens
Next Post
Pristine Conditions at All Southeast and mid-Atlantic Ski Resorts