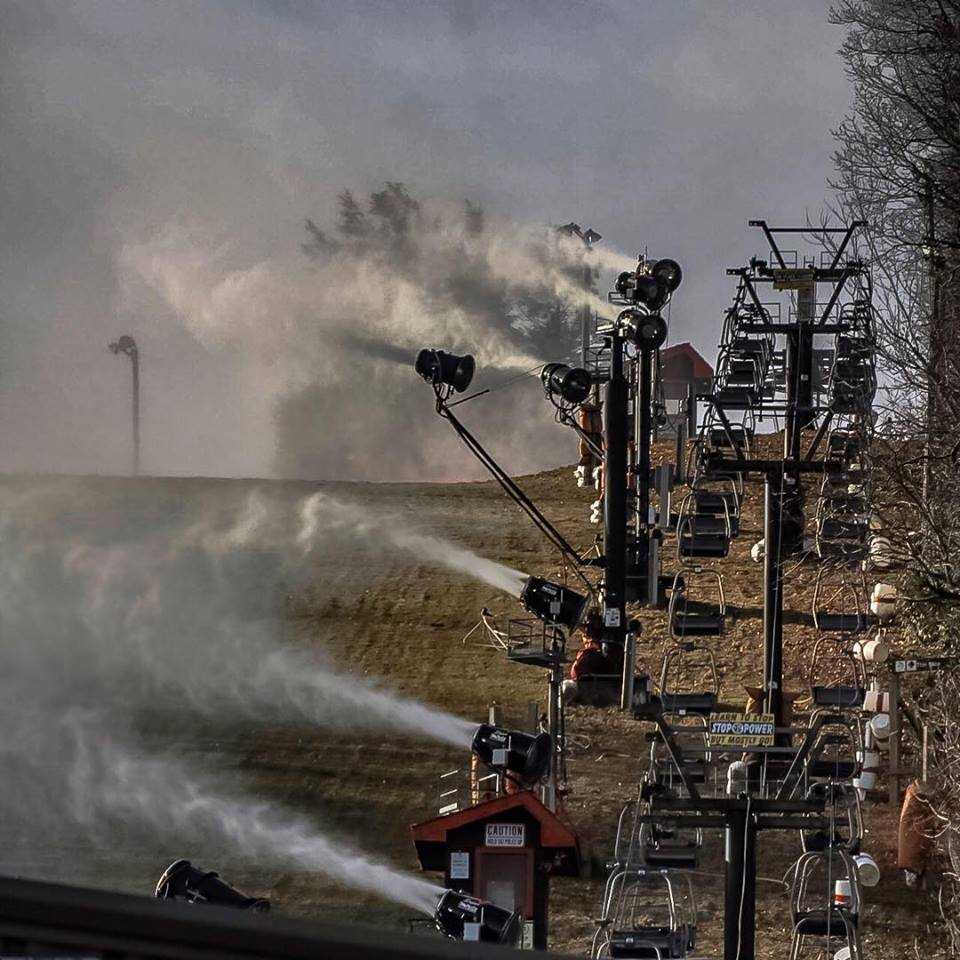 Ah yes, the sight of snowmaking on the webcams is a great way to start Hump Day.  It’s been a rough seven or eight days now, but we are in for a treat over the next few weeks.  Winter has returned and is here to stay for the foreseeable future!

Only a few resorts are making snow this morning even though many more were seeing temps below freezing.  The mercury didn’t fall until later on in the night though and temps will get slightly above freezing today for many, so the snowmakers must be holding off until tonight.  Beech Mountain, Sugar Mountain, Canaan Valley, and Snowshoe Mountain all went ahead and pulled the trigger though and got the party started (EDIT:  App also turned the snow guns on later this morning).  Below is a glimpse at a few of those resorts this morning.

From the top of Beech Mountain

Every resort should be able to join in on the snowmaking fun tonight.  Temperatures will dip down into the 20’s and teens as the colder air continues to filter into the region.  For most of the ski areas in North Carolina and West Virginia (and Wisp), once those snow guns turn on tonight they will remain on through the weekend and into early next week.  The temperature doesn’t look like it’ll get above freezing for those locations until Monday.  The only limiting factor is available water.  Expect to see a lot of whales.

The Virginia ski areas and Ober Gatlinburg won’t be quite as cold as the others, but they will be able to make snow each night.  Wintergreen might be able to eek out a day or two of around the clock snowmaking as they are a bit higher in elevation.

There is some natural snow possible Friday and Saturday nights too.  Panovich went over that yesterday and I just wanted to remind you of it.  It still looks light in nature with “sub advisory amounts” expected per the Charleston, WV NWS office.  However, it’s just an extra little somethin’ somethin’ to get us all excited.  I will go over that some more tomorrow and Friday as we get closer to the weekend.

With the arrival of the Arctic blast, we’ve had another opening announcement.  This one is from Massanutten.  They plan on opening next Saturday, December 15th.  That makes me very happy as I’ll be up in the DC area for Christmas and might have to make a day trip out there!  You can read more about the announcement by clicking the link below.

I’d imagine we’re going to see more announcements like this in the coming days.  They’re going to be coming in fast and furious.  I am interested to see who decides to open ASAP and who decides to hold off until next weekend.  Holding off until next weekend will allow a ski area to lay down a TON of manmade snow.  The resorts that choose to do that could be looking at some of the best opening day conditions they’ve had in years.  Opening day has the potential to look like mid-season.

Wrapping up today, Snowshoe remains the only open ski area but that is going to change soon enough.  We’ll have at least a handful of open resorts by the weekend and they’ll be looking much, much better than they have at any point so far this season.  Make plans for the weekend!  Winter is here baby!