First things first. The MOST IMPORTANT stuff for today.

Thank you VETERANS for all of the sacrifices that you have made for our freedoms – freedoms that so many of us take so for granted everyday. Thank you to the families of veterans who many have made the supreme sacrifice, losing loved ones who have died fighting those battles that keep us protected in this wonderful country. We celebrate all of you today! 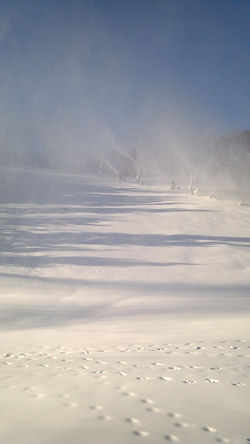 <View of CATALOOCHEE this AM. Thanks to Tammy Brown for that great shot!

My cell phone began hopping yesterday as snowguns cranked up at Cataloochee Ski Area in Maggie Valley around midday on Thursday. Then came the calls from over at Sugar as Louise Anderson, then Hope Harvey – both Sugar Mountain business owners and management. Back to back texts rolled in as well as an elated voice mail from Tammy Brown over at Cat who obviously had an extra cup of coffee before calling. (She was e-x-c-i-t-e-d to have those guns blaring. (Tammy is Cataloochee’s Marketing Director…and a sister from another mister.)

Lots of snow was laid down overnight BUT NOBODY WILL BE OPEN FOR SKIING OR SNOWBOARDING TODAY!!!

After the voice mail messages of Thursday, Tammy Brown of Cataloochee sent me this great photo of just how much snow was laid down at Cat overnight. Gracious they look like they could open today! I was up at Sugar this morning at 7:15am and they’re not ready for prime time just yet. We’re thinking another night of snowmaking at Sugar will do the trick for a 3/4 station to bottom opening. 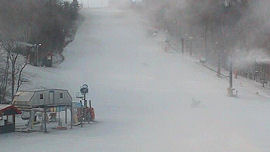 Brad Moretz called me last night and they too made snow and Appalachian Ski Mountain looks as though they too could have opened today or Saturday morning but Brad told me, "Mike we have a planned opening date around the 18th of November, weather permitting and we like to have a good product to offer people on opening day, so we’ll keep making snow whenever possible to offer the best snow we can."

I mentioned the forecast and he shared that they like to kind of test their snowmaking anyway and they’ll see how things go between now and the 20th and go from there.

It sure doesn’t take long for the message to get around amongst snow loving peeps. I rarely carry my cell phone with me, but it began receiving text after text reporting the snowmaking. I swear I think the first plume of manmade snow had just hit the cold air when my phones and phone lines lit up. You guys rock!

So ski and snowboarding season will begin tomorrow morning for sure. Cat plans to open at 8:30am and I have to believe that Gunther will be right in there about the same time for an opening. I know that Kenny Griffin, our staff meteorologist, snow reporter and overall snowboarding freak – will be their for one of the first chairs in the morning. Evidently a number of our messageboard people will be there and over at Cat as well!

Who knows really. From the 5-10 day forecasts that we’re seeing from numerous sources INCLUDING our own Kenny Griffin (see http://www.highcountryweather.com/video.php ) it appears to be milding back up even going into Saturday. By Monday the temps even up around Snowshoe Mountain look to be pushing upward into the upper 50s and near 60°. Overnight lows after tonight look to be too warm to make snow anywhere in the region through at least Sunday, November 20th.

So this couple of days of excitement don’t look like they will last. However it will be cool to see some snow skiing and snowboarding happening with at least TWO ski areas opening in the region.

Everyone have a GREAT day and we’ll update you in the AM!

Previous Post
What a difference ONE NIGHT makes! Cataloochee Ski Area looks to be READY to open this morning! They WILL open Saturday at 8:30am
Next Post
Early Morning Grooming is being Inspected before Cat Opens for the Season TODAY! Click to Enlarge!