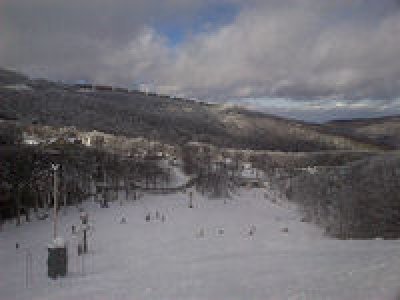 Well I guess now that we've all confirmed by our own existence that the Mayans and Nostradamus were all wrong about the end of the world taking place in 2012…and that we're not in the midst of World War III…we can get about enjoying life.

…and LIFE IS GOOD right now if you're a ski or snowboarding enthusiast that resides or rides the ski resorts of the Southeast and Mid Atlantic.

Let's get right to it today and talk about the biggest news of the day and that is the fact that we are now seeing resorts really rev up their slope offerings. Now that they've gotten some good base depths down on the main trails that they need to even call themselves "OPEN" they are now taking things to a whole different level and opening trails that we the "regulars" want to see open.

So that's what I'll talk about today and let's get right to it.

WEST VIRGINIA SKI AREAS: 103 Trails Open Total. These guys got NATURAL SNOW in the last 24 hours. Snowshoe, Canaan and Timberline are reporting from 1-1.9" of new snow.

SNOWSHOE MOUNTAIN: 44 of 60 Trails & Snow Tubing, Snowmobiling, Snowshoeing, zip lining, etc. Cupp Run is opening today! They've expanded over 100 acres in the last two weeks and received 3 and a half feet of new snow during that same period!

WISP RESORT IN MARYLAND: 24 of 32 Trails & Snow Tubing, Ice Skating, Mountain Coastering and more. They received another one inch of natural snow and are the only ski area that MADE SNOW this past 24 hours as they are making snow this morning.

MASSANUTTEN: 8 of 14 Trails & Snow Tubing
Not sure what happened to it, but I really liked their old snow report page as it was full of great information. They seemed to move away from that thus far this season. Nevertheless Massanutten is coming up to speed now with more trails open including a black trail in Diamond Jim and the CMB Terrain. 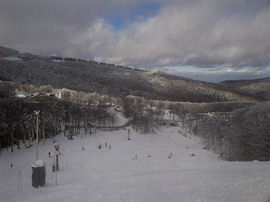 Wintergreen Ski Resort from this morning…compliments of Wintergreen Resort.

WINTERGREEN RESORT: 16 of 26 Trails & Snow Tubing
Upper Diamond Hill and Loggers Alley trails open today.  A little natural snow is on the way with total daytime snow accumulation should be 1-2 inches. The Plunge is open with seesions from 10am-9pm.  Ridgely's Fun Park is open with sessions from 11am-4pm. 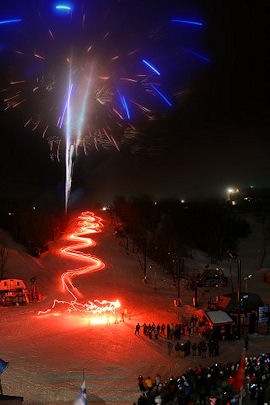 APPALACHIAN: 10 of 12 Trails & Ice Skating
There are some reports out there that are saying that App is 100% open and they actuall say that on their own website (http://www.appskimtn.com/2012/12/new-years-eve-slope-update/) however they are two short of 100% this morning.

CATALOOCHEE: 15 of 17 Trails and Snow Tubing

SUGAR MOUNTAIN: 14 of 20 Trails, Ice Skating & Snow Tubing
Sugar is reporting 6" of new snow. That is unintentional I assure you but it is also not accurate.

WOLF RIDGE:  6 of 22 Trails & Snow Tubing
These guys just have had a rough time of it over the last couple of years trying to keep up with day to day chores with an under-resourced staff. They are reporting fresh snow from two days ago on the front of their site. They also haven't updated their snow report as yet since yesterday. However we'll go with what they had open on the 31st.

Conditions will be pretty awesome across the region and the slopes will be a LOT less crowded than yesterday as New Year's Eve parties will come out later than on Monday morning. Also a lot of people will be leaving today and travelling back home.

This should be a great day to ski or ride as far as slope conditions are concerned. THERE IS some wintry mix, rain, and snow in the forecast so keep an eye on the weather forecast over at www.HighCountryWeather.com and go hit the slopes when and if you can!