Happy New Year Everyone! It was a successful Holiday Ski Week Across the Region! 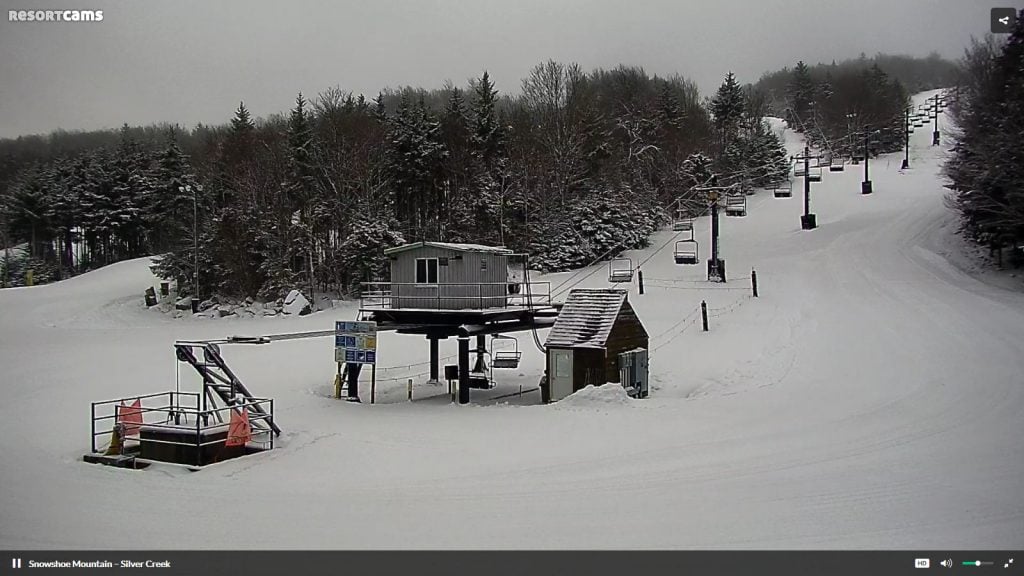 (Photo is of Silver Creek Trails this morning ready for action after a foot of snow has fallen in the last three days.)

How successful is anyone’s guess as ski area ops are always pretty tight-lipped on these things. However, using the logic that every ski area was open and operating and all of the live webcams showed slopes that were dotted with people – we’ll say it was a successful week. The weather held out for the most part and while most of the resorts were operating with less terrain open than they would have liked – the reports that we’ve read are that guests took advantage of that open terrain and traffic was brisk across the region.

I won’t name names, but there were a few resorts where skier traffic seemed way off, but anything is better than last year at this time. I was able to have a conversation with two industry insiders at a couple of the largest/busiest resorts in the region and they also stated that while business was good – it wasn’t going to set any records as far as skier visits and percentages of the mountain’s lodging being fully booked.

One person who I spoke with also mentioned that the way that the Holiday fell on the calendar this season also had a bit of an effect on attendance as many school kids have to go back to school on January 3rd, and most families would use Sunday (today) as there return travel day and thus pull numbers down a bit.

All in all though it’s been a “successful Christmas-to-New-Year week” and now we’re into a new year. Hopefully the weather will continue to cooperate and perhaps provide a bit more cold and snow to all of the southeast’s mountain communities as we head deeper into winter.

I was reading David Lesher’s Canaan Weather content this morning and even in Davis, West Virginia – where they’ve seen 31″ of natural snow this season – THEY are over a foot behind the long term average for January 1st. Of course those numbers dwarf what has fallen thus far in the North Carolina and Virginia mountains as Beech and Sugar have only seen 5-7″ thus far.

Roughly a foot of snow fell here at Snowshoe West Virginia from Friday, Saturday and last night. That snowfall and below-freezing temps allowed Snowshoe and all of the West Virginia ski areas to make more snow and Snowshoe has opened a few more trails for today’s crowd.

December was truly a challenge for ALL of our ski areas to make snow with less-than-perfect temperatures and that still has it where there are NO ski areas in the region running at 100% open. In fact, about one-half are running at 50% or even less.

Temperatures have allowed for a few days of snowmaking, followed by mild-ups and some rainfall thus far and that trend or pattern seems to be continuing at least as we head into this week ahead. Most of our region should see some spotty, light rain and highs in the 40s and even some 50s – with lows to mild to make snow until sometime around Wednesday night.

The good news is that all of the ski areas are doing a great job of maintaining what they have open in good condition and with snowmaking and some REALLY COLD temps hitting mid-week we should have great conditions for the coming weekend.

There’s even some snow in the forecast as we look ahead to Thursday and next weekend is looking bitterly cold with highs in the teens and lows near 10° across much of the area.

Our guess is that resorts NOT located in WV will work to make a ton of snow on their core trails to insure that those are in good shape with an eye on the longer-term forecast to see when it makes sense to expand trails. The WV and Maryland ski areas are simply in better shape with a bit more favorable temps thus far and we witnessed some HUGE snowmaking whales on Widow Maker and Shays Revenge here at Snowshoe – so it is obvious that they plan to open those popular trails pretty soon.

Hopefully we’ll see much the same from all of our favorite ski areas throughout the week and next weekend ahead.

That’s going to do it for me today. Kenny Griffin is out on the mountain this morning and he’ll probably post some sweet pics later.