Happy Friyay folks.   This is Kenny with you all today and today’s post might get a little on the rambling side as I’m excited for a variety of reasons…and I haven’t even had my coffee yet.  I had an amazing day here at Snowshoe yesterday and I’m still on a high from it I think, folks are on their way up here for the Summit, and more snow is in the forecast for us.  It’s going to be a good weekend!

As the title of this post mentions, today is the final day of meteorological winter for the 2019/2020 season.  While it’s been a forgettable one in terms of natural snowfall, it’s definitely going out on a high at least.  The last 36-48 hours has seen anywhere from a trace to a almost a foot of snow fall at ski areas in North Carolina, West Virginia, and Maryland.  Wednesday night saw the snow start to fall and yesterday was a continuation of that in the northern portion of the region as Winterplace (Trace), Snowshoe (5″) , Canaan (3.9″), and Wisp (5″) are all reporting more this morning.  Check out the SNOW REPORT page to see all of those numbers.

I was out and about here at Snowshoe yesterday and I can say that it was PRIMO.  I haven’t had a legit powder day in probably 4 years now, since I went to Tahoe.  I also have never had a weekday/non-holiday powder day at Snowshoe.  To say I was stoked is an understatement.  Whenever I put together a video edit later this weekend I’m definitely going to have to cut out a lot of the audio.  There may or may not be a lot of hooting and hollering coming from myself and possibly some expletives as well.  If you were on the chairlift yesterday you undoubtedly heard me at some point coming down the mountain.  I definitely wasn’t the only one though as the stoke was high and others were doing the same.

Here’s a clip of me cruising down Widowmaker in the afternoon.  This was at 2:15pm.  Still getting face shots!

It turned out to be my ideal Snowshoe day.  It snowed all day, I rode powder, went to the Draft House for a bit, hot lapped Ballhooter for the last 30 minutes, got 20 runs in total, hot tubbed it up, then went to bed super early, falling asleep by a fire.  PERFECT.  Below are some photos I snapped yesterday.  Click to enlarge. 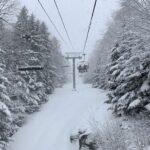 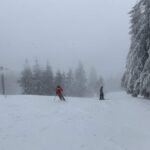 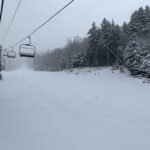 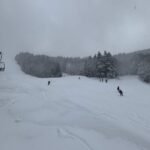 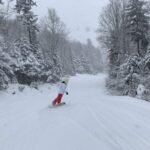 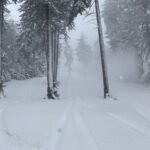 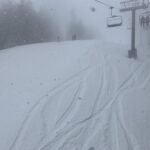 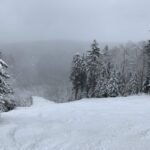 It looks like today and tonight will see additional snowfall for the same resorts who have already benefited in recent days.   I was pleasantly surprised to see the Charleston WV NWS had upped the snowfall forecast for tonight from 1-2 to 2-4 inches.  That’s on top of 1-2 today.  Woo!  Several more inches are also expected elsewhere.  Here’s Brad Panovich’s latest forecast where he talks about it some more.

A trace to several more inches to maybe another half foot for the ski areas in North Carolina, West Virginia, and Maryland is going to have resorts in those locations looking amazing for this weekend.  It’s going to end up being one of the better ones this season, if not the best…maybe?  I always hate claiming that but it could be true.  It’s definitely the best natural snow event for some resorts.  Canaan, Wisp, and Snowshoe just increased their season snowfall by approximately 15-20 percent in the past two days.  That’s awesome but also an indicator of the type of winter it’s been.

I also want to give credit to our guy Brad Panovich as he’s going to end up nailing the forecast.  He’s been saying all week that this was going to be a significant event, even when others had forecasts of 1-3″.  That’s why he’s the best.

I know I have mainly focused on the resorts in NC, WV, and Maryland as that’s where the natural snow has been but I also wanted to mention the stellar conditions currently at the Virginia resorts and Ober in Tennessee.  Heck, Ober actually reported two inches of snow yesterday morning which is awesome to see.  The Virginia resorts are always in the snow shadow of West Virginia but they all made snow last night and are all playing on a good amount of terrain right now.  You can’t go wrong if you go to any of those resorts this weekend.

Get out and make some turns this weekend if possible.  The calendar turns to March tomorrow, meaning we only have a handful of weeks left in the season.  This is actually the last weekend of skiing and riding for one resort (The Omni Homestead) and I’ve seen another already say next weekend is their last (Sapphire Valley).  March weather can be random so who knows what’s going to happen.  Basically, just get it while you can.  It’s a long and hot offseason.

Enjoy the weekend and I’m looking forward to seeing everyone coming to the Summit.  Have fun everyone!