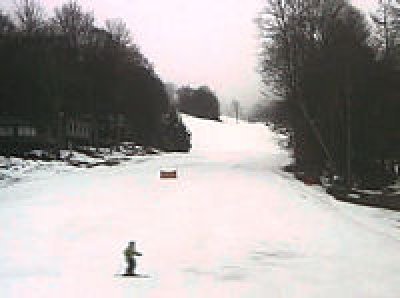 I read somewhere that Easter is a time wherein the miracle of Christ's resurrection transformed a martyrdom into a triumph. On Good Friday the world said 'No' to Christ. On Easter morning God said 'yes' to the world."

That's about as good a description as I've ever heard Easter explained. So happy "Yes Day" to all of you.

On this day last year the ski and snowboarding season was already well over. Last season ended on Sunday, March 18th. On March 31st, 2012 the high temperature in Banner Elk was 70°. By April 4th the mercury soared to 75° and stayed there for the most part the rest of that Spring. Snow in the slopes was also a faint memory by this time last year.

No wonder I have tons of photos of kayaking around Watauga Lake dated in mid March.

Fast forward to today and unfortunately it's a wet one, but there's snow measured in FEET not only on the slopes of our Southeast and Mid Atlantic ski resorts – but there's still natural snow on the ground! According to David Lesher's Canaan Valley weather center there is an average base of 15" on the ground across all of Davis, West Virginia.

I saw where Snowshoe was reporting some snowfall this morning. It is changing over to rain (probably by the time you guys and gals are reading this) but it snowed AGAIN this morning!

Believe it or not SNOW is in the forecast for Monday and Monday NIGHT up in Pocahontas County, West Virginia (home to Snowshoe) with highs in the mid 20s on Tuesday and lows around 13°. Is that not nuts?!?!?!

THE NEWS IS ALL ABOUT THE WEATHER…

Our buddy Joe Stevens was featured on THE WEATHER CHANNEL on Saturday. Sorry I missed it Joseph. I was travelling to visit family for the Holiday. I can bet money that I know about what was said. With all of this snow and Winterplace Resort and Snowshoe Mountain skiing and riding til April 3rd (Winterplace) or April 7th (Snowshoe) conditions are as nice as some mid seasons…especially LAST season.

Timberline Resort is riding their last day of the season and proudly with all 40 trails. They will be skiing and snowboarding til 4:30pm today. I have to say ONE MORE TIME that this snow report: http://www.visitcanaan.com/timberline/snow-report-spreadsheet.html is the best one out there. Check the detailed commentaries for obstacles, bumps, etc.

I received a ton of videos and photos from Ludovic Moore from Timberline when I check my INBOX this morning. I'll be posting those summaries of the kind of season that Timberline Resort had this season.

The Silver Creek area will be open for its last day of the season today. Go get some turns on great spring conditions thanks to almost 5 feet of snow in the month of March alone! Camp 99 and Knot Bumper were ungroomed overnight. They have 228 acres of terrain to explore including 52 trails and 9 lifts.

The Snowshoe Basin area will now be open through Sunday, April 7th. Snowshoe surpassed their average annual snowfall and are not ready to say goodbye just yet. Join them and soak up the last moments of the longest season in a decade.

The Homestead Resort is open today from 11am-4:30pm on an 18-32" base of wet granular conditions. Thanks to all the input we received this season from Lynn Swann and Matt Fussell up there.

Who would thought that The Homestead would be the lone ski area open in the state of Virginia this late in the season. Wintergreen is CLOSED today, Easter Sunday, but they will reopen NEXT SATURDAY for another day/weekend of skiing and riding for this season…weather permitting. They've opted to close during the week and reopen for next weekend only according to their plans right now.

Winterplace Resort is riding for DAY SESSIONS only today and they are also 100% open with all 27 trails. Travis Roberts emailed me, "We Are Extending The Season To Wednesday, April 3, 2013 and maybe longer!"

Every trail, every terrain park, every slope…and this is Spring Skiing???!!!!

Wisp Resort is playing for DAY SESSIONS today on this, their last day of the season. They have 31 of 32 trails open, snow tubing, ice skating, mountain coastering and tons of fun on the slopes.

Sugar will be the last resort standing in the state of North Carolina for this season. Last chance to ski and ride!  Sugar will close the slopes today at 4:30pm.

Closing day is always extra fun at Sugar. By mid-afternoon today the sounds of BOSS Hawg's live Bluegrass will be heard from the deck. The outdoor grill will be cooking hot dogs and hamburgers while the annual ceremonial snow burning officially concludes Sugar's 2012-2013 winter season.

Enjoy the last days of this season peeps! It's been a very nice one. After the horrendously slow start back in November and December, we can say that everyone was holding their breath that we'd get a finish like we've just had. It will go down in the record books for length of season across many ski areas. It will go down as amazingly good – skier visit wise for most. It will go down as another subpar season for Wolf Ridge. It will go down as a successful first one for new owners at Wisp and Wintergreen resorts.

It will go down for me personally as the season wherein I got the fewest days on the snow of any season since I began skiing. Hopefully I can remedy that next season and make certain that I don't see a repeat performance of that!

Happy Easter peeps (get it?). Tonette and Kenny will take you the rest of the way this week and I'll be back to put a wrap on things with some closing comments, rants and raves.

That's ENOUGH (don't you think?) for today. Email me if ya like at [email protected]