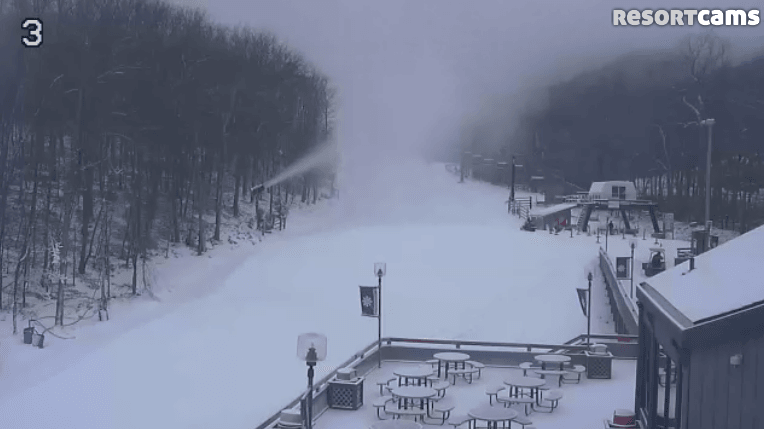 It’s another gray, foggy morning at the ski areas across the region.  Yesterday saw a little bit of snowmaking and a teeny bit of natural snow.  Winterplace, Wintergreen, and Massanutten are all reporting a dusting/trace/half inch this morning.

Today should be the final day the resorts have to contend with a wintry mix being in the forecast.  It’s not really been that bad to be honest.  Base numbers have held pretty steady and the cams show no change in coverage and what not.  Snowmaking over the next few days and nights should only help to improve things for the upcoming MLK holiday weekend.  It really is lining up to be a good one.  A tad bit of snow is even possible for Sunday night in NC and WV.  Nothing major, but I’m sure all the vacationers would love to see a dusting or so come Monday morning.  Personally, I’m looking forward to a hoody day at Beech on Saturday!

I looked at the calendar this morning and it hit me, we’re basically halfway through the season already!  For me anyways, November through March is snowboard season.  That’s five months.  It’s now the middle of January which is right at the halfway point of the season.  Crazy.  It’s been an up and down season so far to say the least, so here’s to hoping the second half is colder and snowier.

Since we are at the halfway point, let’s take a look at the open trail count, state by state.

Those numbers aren’t terribly bad, especially since November and December were so inconsistent in terms of the weather, but they are definitely off compared to some years in recent memory.  I decided not to go over natural snow numbers because well, those are relatively meager thus far.  Open trail count may be a little off, but snowfall totals are WAYYY off.  I need pow.  Now.

A lot of seasonal outlooks back in the fall did say it’d be a backloaded winter, so hopefully that comes to fruition.  Cross your fingers!

Enjoy your Hump Day everyone.