Great Skiing in the Great Smokies 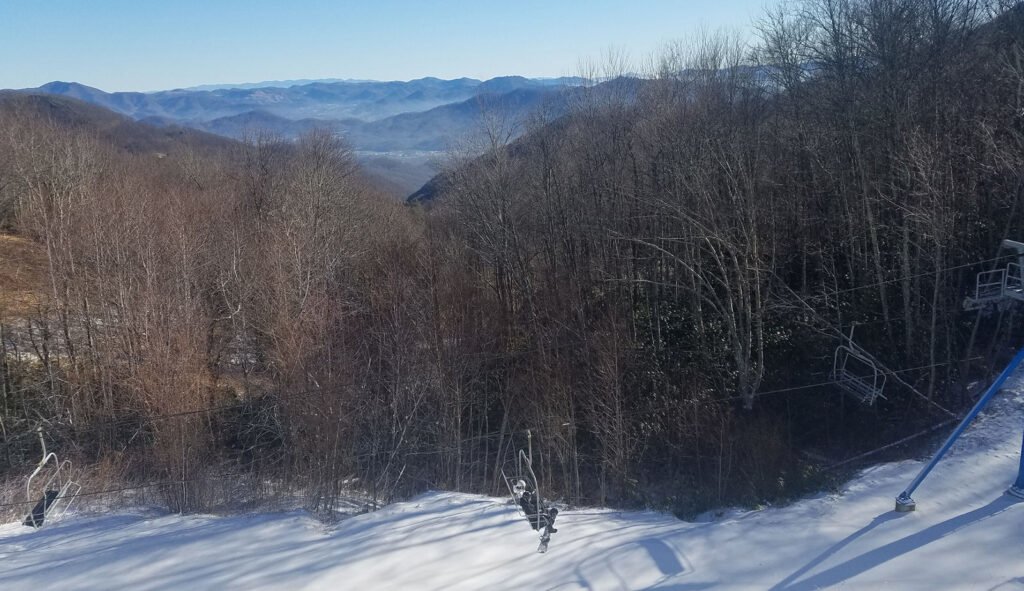 Photos and Story by Brian Dix

Hello once again skiers and riders of the southeast. Happy Holidays and welcome to winter (almost).

Skiing mid-week is a hidden gem for a lot of us in the workforce. The 9 to 5 Monday through Friday grind narrows the window of opportunity significantly. That blocked off chunk of time is rarely cracked, and if you are given the chance to break free and hit the slopes during that grind, you should take it. My situation at work was simple as there was a vacation day remaining in 2019 with a use it or lose it deal. I’ll gladly used it.

The drive from Charlotte to Cataloochee is three hours and the scenery gets better as you get closer. With 6,030 ft. tall Cold Mountain visible just south of Asheville on I-40 you will find yourself surrounded by mountains in all directions. Tucked away off the interstate is a town near a scenic lake called Maggie Valley. This is the town most people will drive through to get to Cataloochee. One thing that needs to be pointed out is that they have a lot of artistically decorate pairs of wooden skis on display amongst their winter decorations (on the drive through Maggie Valley). Each pair had a different design and they seem to be from the same artist. This added a nice element to a great day in the area and on the slopes.

What makes this early part of the season splendid is that when the cold air arrives the trail crews jump in action. It was apparent at Cataloochee that their staff has been busy making snow, as I did not experience any bald or exposed spots. Add the fact that the temperatures ascended from barely below the freezing to a comfortable warmth, with zero clouds in the sky, nor the snow guns firing at your face, and the recipe for a blue bird day was set. Much like the song Christmas Canon, which was heard on the drive up, these separate elements blended together nicely into a beautiful harmony.

It is accurate to say that the current status of this ski season at Cataloochee is great. I overheard that they had six runs open with three lifts spinning, and those numbers will hopefully jump up during the night hours. An added bonus is that they have a top to bottom route available with two chair lifts (Rock Island and Omigosh) on the offering. Please note that the Rock Island Lift goes about 3/4th of the way up while the Omigosh Lift goes to the top, but also has a midway unload. The Easy Way lift was also in service for beginners to build skills on.

Those options seem to bring the skiers and riders out, and was obvious in the parking lot. While gearing up I saw license plates from both Carolinas and most of the surrounding states such as Alabama, Tennessee, and Kentucky. There were multiple Georgia and Florida vehicles too. Also, one college stood out amongst the rest with the most apparel being worn. The folks who volunteered their fanhood to the masses from the University of Tennessee love to ski.

As for the conditions, they had nice wide coverage on all open trails.

The snow was pleasantly soft on the lower elevation trails, such as Rabbit Hill, due to also being in direct sunlight. However the trails above 5,000 ft., especially Upper Omigosh, were a bit firmer and required sharper edges to navigate with. The first run of the day caught me by surprise as everybody was flying at a high rate of speed whether they intended to do so or not. A few whoop-whoops and yee-haws were drowned out by ski chatter and the occasional Ahhhh!

Fortunately as the day carried on, the sun did its thing to soften everything up. In the afternoon it got so warm that a select few braved the elements with t-shirts. There was also a guy rocking a pair of shorts, and they appeared to be daisy duke length. Former Utah Jazz basketball star John Stockton would be proud.

The warmth also helped cell phone batteries last longer. Not sure if there is a direct cause and effect between very cold air and battery life, but people say it is a real thing. I made it a habit to put my phone in airplane mode while skiing, and the battery stays charged. The phone will still be able to take pictures and videos, but the basic function of placing and receiving a call or text will not work unless airplane mode is turned off. That is why it is always good to set a meeting place and time with people you are skiing with in case you get separated. Give it a go and see what you think.

Overall this place, and the region in general, is ready to feed your inner skiing or riding beast. So if you are kicking the idea around of playing in the snow, or perhaps dreaming of a white Christmas, head to your nearest ski area. The next runs could be your last turns of the decade.

Previous Post
Southeast Resorts Will Enjoy The Best Weekend of the Season Thus Far
Next Post
Welcome to Winter. Kind of….