Great Conditions, Snow and MORE SNOW on the Way!

A couple more inches of SNOW fell overnight last night and things are going to be GREAT if you’re headed to the slopes over the next few days. Schools are out at many of the mountain communities again today. As I exited my neighborhood this morning I watched as one of the neighborhood kids throw his skis and boots into the back of a minivan on their way to Appalachian Ski Mountain instead of school. Man, I HOPE these kids know how blessed they are to live and grow up in the mountains!

Meteorologist Brad Panovich posted another Skier’s Forecast Video this morning for us and he’s talking about what many on the messageboard are talking about – the BIG STORM headed our way. On Tuesday morning Brad was thinking that the storm was definately going to be dropping significant snows on us by Friday. This morning’s update is titled "STORM ALERT" as Brad says he is tracking another significant winter storm. As he had forecasted 24 hours earlier, things will be pretty quiet for today and most of Thursday so the next two days will be awesome for skiing or riding.

Brad is forecasting a bit of snow for the West Virginia mountains on Thursday midday as the first front that will bring in the arctic air pushes into the region and sets the stage for the BIG STORM that’s going to come out of the west and affect our weather for the weekend! 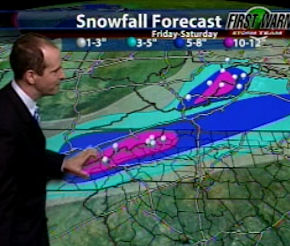 Actually according to Brad’s forecast we should see some snow flurries and the beginning of the storm come in on Friday NIGHT with most of the heavier snow forecasted now for Saturday morning. The storm seems to be tracking a little further south than it had been 24 hours ago and that is good news as that will allow the cold air to settle in and the slower movement of the storm will likely produce some heavy snows for the ski areas. Brad’s forecast is for 10-12" of snow Friday night through Sunday morning for the North Carolina mountains. He’s thinking that 5-8" of snow should fall into the Virginia and Maryland ski areas with the same 10-12" forecasted for the West Virginia ski resorts! 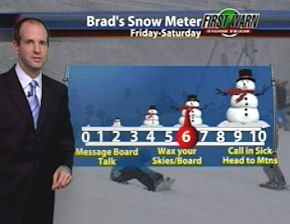 Brad has outdone himself with his new "Brad’s Snow Meter" that will please our fans as he’s debuting it this morning. At this time he’s advising our readers to "Wax Your Skies and Board" and it’s likely he’ll upgrade things on Friday as the storm gets closer. Cool Brad. Very cool.

Temperatures will be COLD through AT LEAST Tuesday with highs in the 20s and 30s and lows in the teens and 20s for the next several days and he’s got a 100% chance of snow tagged on Saturday so if you’ve got plans to be at a ski area this weekend – you are in luck!

The timing of the storm could not be better for travelers as you can make it in safely to your lodging, ski and ride some powder all weekend and then by the time you have to head home, the DOT crews will have the roads drivable
in a Barbie jeep! Too cool!

Bring it on baby!

THANKS TO GREG DOBSON…

Greg is a longtime visitor of this website and a frequent contributor to content for me. He’s with the National Environmental Modeling and Analysis Center and based in Asheville. Greg emailed me on Tuesday about some minor errors in my reporting of snowfall for the previous day. I was alluding to snowfall at the ski areas and he informed me that 1.8" of snow fell in Buncombe County. I mentioned snowfall in the state rather than snowfall at the ski areas. He’s right. Since most people only ski or ride at ski areas or cross country skiing trails – I’ll sleep okay tonight knowing that we reported what most of you are looking for.

Greg DID share another feature of the CoCoRaHS reporting that will save me a bunch of time in the future when looking for snowfall for the region. You are DA MAN Greg. Thanks for that insight.

It’s funny but we received a few emails from some of you who have obviously not paid attention to E-V-E-R-Y S-I-N-G-L-E syllable that I write here. (Imagine that!) Anyway some people thought that I was making some kind of joke that was alluding to the misreporting of some ski areas snow measuring by coming up with some crazy word made up letters that when decyphered would mean that we’re correcting the misreporting! That’s funny – but not true.

CoCoRaHS actually stands for "Community COllaborative Rain, Hail & Snow Network. They are a unique, non-profit, community-based network of volunteers of all ages and backgrounds working together to measure and map precipitation (rain, hail and snow). By using low-cost measurement tools, stressing training and education, and utilizing an interactive Web-site, their aim is to provide the highest quality data for natural resource, education and research applications.

These guys and gals, along with people like David Lesher up at Canaan Valley, Greg Dobson in Asheville and numerous others who email us with official measurements do us (and our readers) an invaluable bit of good!

When we started this website we kind of flew by the seat of our pants and it is now amazing to be able to bring you guys all this information that we have at our fingertips.

SO HOW ABOUT TODAY’S SNOWFALL REPORT???

Because of these great reporters we can tell you that another 1.5" of snow fell in the last 24 hours up at Beech Mountain. They now have about 3" of snow on the ground from the last two days. Here’s some other reports:

Appalachian Ski Mountain – 1.5" of snow in the last two days!

Sugar Mountain – 1.5 with 2.5" on the ground (They are not reporting ANY snow since Tuesday morning and that is an error. It snowed most of the day on Tuesday and overnight. Although it was light snow, they did pick up another 1.5".)

Winterplace Resort – 1" of new snow and 3" in the last two days.

After not adjusting base depths for 12 days during the mild spell, now that it has gotten colder Bryce Resort has dropped their base depth two days in a row now – by 9". They have not made snow in the last two days according to their report and there’s been no natural snowfall. They remain in good shape with grooming and they are 100% open and report a base of 35-63".

Wintergreen Resort reopened several trails and now offer 24 trails for today and tonight along with their tubing park.

The recent snows have missed the Virginia Ski areas repeatedly of late, and no measureable snow fell in the last 48 hours at the VA ski resorts. They ARE expecting 6" or more for this weekend!

Canaan Valley has seen 4.5" of snow in the last 48 hours but they dropped 11 trails from today’s offering. They will have 25 trails open for today. Our guess is that they are focusing snowmaking ops on those for this weekend’s crowds.

We’re on day 61 and there are 76 more days of opportunities to enjoy the snow for the 2009-2010 ski and snowboarding season!