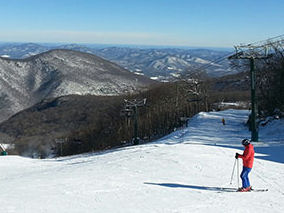 I've admittedly been AWOL a lot this season as Tim Bahlke has done the "yeoman's work" as far as keeping all of us up-to-date with what's happened around the Southeast and Mid Atlantic this season. He, Kenny Griffin, Joe Stevens, Herb Stevens and Brad Panovich have done and outstanding job of painting us a very vivid image of what's been available for us on and off the slopes at our favorite ski resorts of the region. 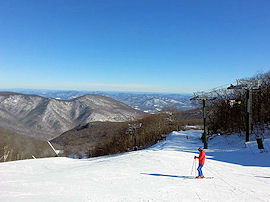 …and a LOT has been happening to say the least! Tim is enjoying some "product evaluation" time skiing at Wintergreen Resort in Virginia today. (This photo is compliments of Wintergreen from Thursday.)

I am certain that he will show us some nice photos and perhaps some vids from up there when he takes the website "flight controls" back over on Sunday morning.

It's funny because as I've done the daily duties of checking in on all of the resorts and updating you guys for these last 17 years, I've witnessed the occasional email from some of you who chime in with a "broad brush observation" about the entire season – that is based on perhaps one or two visits to a ski area over a short, fixed amount of time. One such emailer once wrote, "Is it just me or has this season's snowfall sucked? When are we gonna get some snow? I'm here at Snowshoe and NOTHING!" 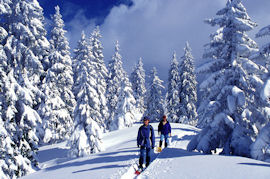 <I pulled this cross country photo from the Snowshoe 2010 archives. There was a ton of snow that season! Old Gil Willis from Elk River sent this one.

I'll never forget that email, because it came to me during the 2009-2010 season when Snowshoe, Canaan Valley, Timberline and Wisp Resorts ALL exceeded 220" of snowfall on the season. So as USUAL it is all about the perspective of the observer.

In MY case, I find myself in the unusual situation where I've only hit the snow on five separate days this season AND I'm so out of the loop that I could easily judge this entire ski and snowboarding season AND the entire Southeast and Mid Atlantic on MY OWN LITTLE window of what I've seen. 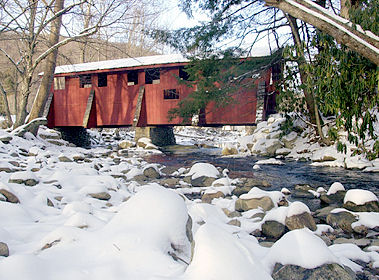 <I took this photo last week during our deepest 2" of snow of the season 😉 The Sleepy Hollow Covered Bridge is a Kodak moment during each snow.

For example, I live in beautiful Sleepy Hollow (between Boone and Banner Elk), North Carolina and the deepest single snowfall that I've seen this season didn't reach 2". We've had snowfall on 24 separate days of the roughly 70 days of the 2013-2014 season so far and yet we've only had MAYBE 13" of snowfall TOTAL on the season.

"Everybody" is talking about it. Our kids have missed 10-12 days of school so far (because evidently we can't have busses driving on dry surfaces when an inch of snow is on the shoulders of the road anymore). I was talking with Len Bauer from over at Sugar Mountain the other day and he was talking about how awesome the conditions were at Sugar and Beech right now…and then we got into the fact that natural snowfall-wise…it's been a lot of "ambience snows" and really NONE that we could go and make a decent sized snowman from.

THAT would be my perception as well. HOWEVER just 15 minutes up the road from my house, Sugar Mountain has seen 47" of snowfall on the season and while there's been no knee-deep snows this season – there HAVE been a few that were pretty sweet.

From January 15-25, 21" of snow fell. I can tell you from my own personal experience that there was NEVER more than 6" on the ground at any one time, BUT 21" DID fall during that period – making up NEARLY ONE HALF of all of the snowfall that Sugar has seen so far this season.

While we appear to be "on schedule" for a normal snowfall season around Sugar and Beech, it HAS been a weird snowfall season (winter) with 24 snowfall days with more than half of them being the 1-2" variety snows. 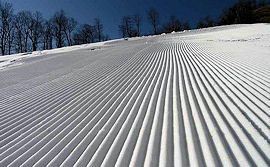 <There's been a LOT of corduroy days at Sugar and ALL of the ski resorts this season.

Of course it's been colder than usual, so the snowmaking crews from all of the resorts made so much snow during January that most of the ski areas are only making snow to kind of "spruce things up" as bases across the region are in awesome shape.

Since I had to play "relief pitcher" for Tim today…AND since I was somewhat inquisitive about just how much snow had fallen across the region so far this winter…I did a little digging.  As I suspected, it HAS been quite an unusual natural snowfall winter thus far. 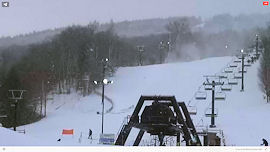 It's SNOWING RIGHT NOW at Canaan Valley (9:30am) See it LIVE at ResortCams.com

Case in point, Canaan Valley, Timberline and Snowshoe are ALL hovering right around 92-94" of snowfall on the season so far. With the heaviest snows usually falling in February and March you could look at their season thus far and think that they've had some really deep snows thus far.  How about THIS little pearl of data?

In November their deepest snow was a TWO DAY storm that dropped 5.8" of snow. In December, the deepest snowfall was 4.7" that fell on December 9th. 9" of snow fell over a FOUR day stretch in December, but the snowdepth never exceeded 5" because of snowmelt and wind during that period. January was much the same, with the BIGGEST SNOW of the season so far being a 6.1" snowfall on January 27th.

So while even in the snowy climbs of West Virginia things have been MUCH snowier than here in the North Carolina mountains (as usual), even THEY have not had the typical KNEE-DEEP snows as yet.

Before I get emails, let me clarify that during the stretch from January 15th-28th, those snow prone areas around Davis and Pocahontas Counties in WV DID see 30" of snow with snow depths rising to 14" on the ground at one time. So it HAS been snowy…just no BOMB that we'd usually see.

Of course the ski area management peeps will tell you that this season has been JUST THE WAY THEY LIKE it so far. A Chamber of Commerce winter season as far as those guys are concerned would be pretty much JUST what we've had so far. JUST ENOUGH NATURAL snow to cover the ground and keep the masses excited, but not enough to scare them off the roads. Perfect cold temps that allow for tons of snow making, and enough so that they can turn the guns off duing ski and snowboarding sessions.

…and that is JUST what we've had so far.

CHECK THE SNOW REPORT FOR THE DEETS...

If you wanting to go and look at base depths, surface conditions and how much snow fell, where…then hit the snow report. Otherwise, let me save you some time today.

THERE'S PLENTY OF SNOW ON THE SLOPES.
MOST RESORTS ARE 100% OPEN OR CLOSE TO IT.
IF THEY HAVE TUBING AND SKATING…THEY'RE OPEN.
RESORTS WON'T MAKE SNOW DURING SESSIONS TODAY.
SOME NATURAL SNOW WILL FALL THIS WEEKEND.

Right, wrong or whatever, our mountains ARE JUDGED by how much "real snow" has fallen. The forecast is for some 1-3" snowfalls across much of our coverage area this weekend and MORE next week. As far as what snowfall has fallen WHERE so far this season…here are some numbers for you.

It's hard to believe that it is already that time in the season when Sapphire Valley does their Outhouse Races down the slopes. That is NEXT weekend, Saturday, February 15th. If you have not seen that, you should go and witness it. The Jackson Taylor Band will be performing and all the fun starts at 1pm. Danny's BBQ will be served up for those who are hungry.  If you cannot be their first-hand you CAN go to TV.SapphireValley.com and watch it STREAMED LIVE.

SIX TO EIGHT MORE WEEKS. WHAT TO EXPECT.

The groundhog predicted six more weeks of winter and whether the cold and snow cooperates or not, the ski resorts have enough snow that they will be in good-to-great shape through their respective closing dates. Some ski areas close in mid March (just four weeks away) and others will go until Sunday, March 30th – which is SEVEN WEEKS away. If the weather holds, I would not be surprised to see one or two ski areas open the weekend of April 4, 5, 6th.

According to all of the weather contributors to our network, we're seeing some decent snows today and this weekend. Snow is in the forecast today AND EVERY DAY through Thursday of next week.  JUST HOW MUCH is "up in the air" literally I guess.

If you're looking for great conditions and some snow…head up.

According to Brad Panovich's latest skier's forecast…we'll see plenty of cold and snow for the next seven days and then things will MILD UP for the rest of February and we could see a bit of February Thaw. So get it while it's great.

If you have a trip planned for the latter part of the month, don't fret the milder forecast as there's plenty of snow on the slopes…and if you're wondering about March…remember the biggest snows of the season nearly always come in March. Remember the Blizzard of '93?

Have fun out there this weekend.

Email me if you have anything to share. I miss connecting with you guys everyday… [email protected]