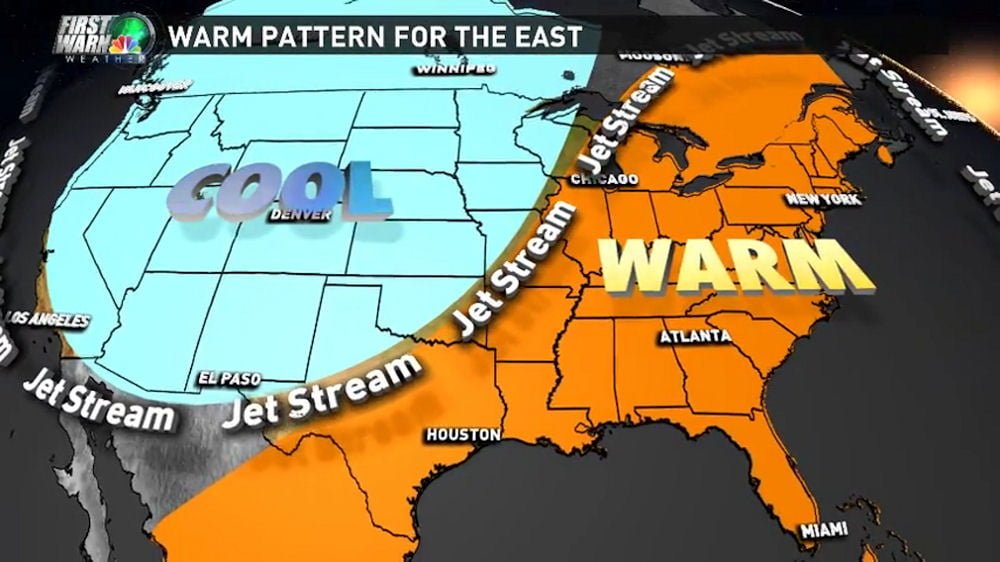 Okay, so it isn’t exactly tropical, but good grief has it been a crazy November and early December weather pattern thus far?  I’m going to keep today’s post short in comparison to the “novel” that I posted on Monday. Thanks for those of you who emailed in response to Monday’s post. Also, for those of you who signed up for our newsletter. We had several new signups on Monday and that is very cool indeed.

If you’re reading this post and want to insure that you don’t miss out on any vacation getaway GIVEAWAYS or Free Lift Passes, etc., then be sure to sign up. It’s free and we will not flood your email inbox with useless nonsense. If we see a big snow event coming or if we have some great news in terms of any of the ski resorts or lodging deals, THEN we’ll drop you an email.

So if you have not signed up already – click on the graphic and do so now.

…and as we suspected, the news isn’t good for the next 7-10 days. There IS some good chances of SNOW late next week, but THIS COMING WEEKEND is looking like it would be a GREAT day to spend at the LAKE! Tennis or golf would be great activities to take part in as the highs are forecasted to approach 70° in SEVERAL mountain locations on Saturday. Even the “coolest” of mountain locations are looking at upper 50s and low 60s again this weekend.

You can watch Brad’s latest Skier’s Forecast Video below. I’ll go ahead and forewarn you that he uses the words “RECORD HEAT” in describing what is headed our way. I won’t spoil all of his hard work in creating these studio quality vids for us…so just watch the whole thing as there IS some good news as we move deeper into the Winter and even for later this month as we approach Christmas. So watch.

There’s isn’t much of one today except to say that Cataloochee Ski Area AND Sugar Mountain Resort are open again on Tuesday. Cat for day sessions on 6 slopes with some thin coverage on Rock Island Run.  Sugar is open with 4 slopes and ice skating for both day and night sessions.

Santa visits Sugar Mountain on Friday AND HERE is the big kicker – Sugar was making snow overnight AND this morning when we logged in to post this report. So they will offer some GREAT turns today.

With the forecast for mild conditions for the next week – ANY resort will be hard-pressed to stay open and those that are not open NOW, won’t be able to pull that trigger until some cold air hits the area.

THE LONE exception to that will be Snowshoe Mountain which WILL open this Friday at 9am with limited terrain.

Beech has posted on their website that they will re-open Friday and I suppose it is possible – but they may also change that message and hold off until more cold hits. We’ll update you when we get that news. 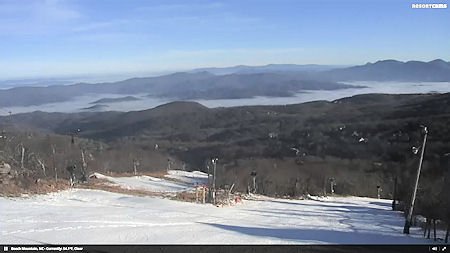 Beech Mountain this morning from the Summit Webcam

The truth is Beech and Appalachian look good enough to be open TODAY. but with this weather pattern, they look like they want to protect the snow that they have and hope for better things in the week or so ahead. Our readers may not know this, but skier traffic really does a number on snow as well as the mild weather. So resorts like Beech, App and even Wolf Laurel…may want to hold onto what they have and hope to get in some additional snowmaking as we get closer to the middle of the month and hope to build base for the more important Holiday ski week.

So #THINKSNOW and #THINKCOLD as it looks like some low to mid to upper 60s for this week ahead with NO SNOWMAKING temps even overnight until around the 18th of the month. Right NOW we’re seeing a 50% chance of SNOW next Thursday if that forecast holds. That is 8-9 days out so who knows. Around that same December 17th date – we ARE seeing a slight pattern change to colder air that should allow for some snowmaking.

We’ll have to hang our hat on that hope as a pre-Christmas cold snap could insure a good Holiday skier visit week. We’re seeing much greater chances for snowmaking cold temps for the second half of the month and let’s hope that holds.

As Brad’s video stated, the entire East coast is hung up in this ridge of near record warmth all the way up to even the eastern Canadian ski areas. Buffalo, New York just set a record for the latest date without ANY measurable snowfall. All of the eastern ski resorts are just waiting to get something going. So we’re not alone.

Panovich also reported SOME news that we can embrace that could spell for a great ski season ONCE WE GET GOING. His research for ALL of the very strong El Nino years over the last few decades shows that in every one of those years, the average of all of those El Nino years showed a very warm December but then as we get into mid to late January and the rest of winter, things were colder and wetter.

He also maintains that Super Strong El Nino years are real “wild cards” in that anything can happen. His prediction is for more of the same in terms of huge, wild, temperature swings where we get extreme cold, snow and even some huge snow storms…followed by record warmth and thaw. I’m certain you will all agree with me when I say, I’m READY for the first really cold swing and some snow.