GIVE IT A TRY 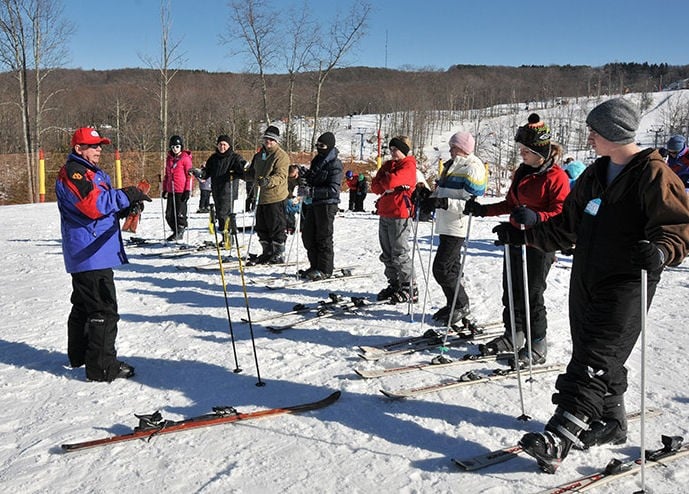 I pride myself in providing new and thought-provoking news in this weekly column. However, I am here to admit, I have been scooped this week by my son, Christian, a 13-year sports columnist for the Charleston Gazette-Mail newspaper. You see, January is Learn to Ski and Snowboard Month across the country and I was planning to make sure everyone knew about the matter in my column this week. But in his, Christian’s Sports Beat, this week, he broke the news, and you can read his column on this website. But none the less, I slide forward with this week’s thoughts.

I have been connected to the ski industry in one form or another since 1985, first learning to ski and then switching to snowboarding in 1997 and haven’t looked back. Yes, January is Learn to Ski and Snowboard Month across the country. A way the industry attempts each year, to create awareness for the industry and get people excited about having fun on snow from the eastern United States to the west.

I have skied and snowboarded across the country and have probably seen every type of skier or snowboarder out there. One thing though I have noticed, the ones who take lessons to learn the sport, seem to have more fun on the slopes. I don’t know of a resort in the country that doesn’t have members of the Professional Ski Instructors Association on staff to work with the young and old wanting to try out the sport for the first time. More on why to take a lesson from a professional instructor in a moment.

Luckily, most of the readers of this column live in the southeast portion of the country, which I believe is the best place in the country to learn to ski or snowboard. There is terrain at all the resorts in the region that is geared towards the beginner to intermediate skier or snowboarder. On top of that, the majority of the resort’s visitors in the southeast region come from basically flat, warm blooded states. I am referring to Florida, Georgia, South Carolina, North Carolina and Virginia. Okay, I know, there are mountains in North Carolina and Virginia, hence the ski resorts located there, but for the most part, the area is pretty flat and most of the time, warmer than the mountain regions.

My point is, the region is a feeder area for the larger resorts around the country. They learn here in the southeast and then try to expand their skiing and snowboarding horizons in the northeast and out west. It is a lot easier to learn the sport on gentler terrain and with instructors that deal with new skiers and snowboarders, almost every day they are on the job.

Let’s talk about why to take that first couple of lessons from a professional instructor instead of saving a few bucks and learning from a friend or relative. Throughout my years in the industry, on many occasions, I have rolled up on a couple (girlfriend, boyfriend or wife, husband) having strong discussions as it pertains to one teaching the other how to ski or snowboard. I have asked which one was the teacher and which one was the student – usually it was easy, because the one that was learning was on the ground and the one that was instructing was hovering over top of them. Not the best situation to say the least. After determining exactly what was taking place, I would send the experienced skier or snowboarder on their way and tell them to catch up with their significant other in a couple of hours and then go and have some fun together the right way. I would then take the newbie to the ski school desk, get them a beginner lesson and life was good again. The moral to this story is, professional ski and snowboard instructors are paid to have patience with somebody learning the sport. The beginner will also learn the correct way of enjoying the sport and thereby come back again and again.

That gets us to the goal of this annual campaign of the ski industry and that is to get new folks interested in the winter sport, enjoy it and keep coming back. Another cool thing about this special promotional month is that resorts are offering special learn to ski and snowboard deals to help get everyone excited to give the sport a try. An easy way to find out more information on what resorts are offering special during January go to www.skiandsnowboardmonth.org. There is a listing on the website that explains what each resort is offering for everyone to learn the sport.

Okay, you say, you already know how to ski and snowboard, so the month doesn’t really mean anything to me. Well think again my skiing and snowboarding friend, because you might also want to take a brush up lesson or two this month. The Winter Olympics are right around the corner, when the best skiers and snowboarders in the world will be competing against each other in various disciplines. Let me bring you up to date on something, each and everyone of those athletes get tips from coaches every day they are practicing their event. That’s right, the ones that do it the best, still need to upgrade their ability to slide on snow. Now are you going to tell me, just because you have been skiing for five to ten years, you don’t need a brush up on your technique every now and then? That’s nothing but hogwash my friend. I am here to say, the more instruction you get, the more you are going to like the sport.

So, the month is here and it is up to you to help the sport grow and continue by getting a friend or relative to learn to have fun in the snow this month and give it a try.