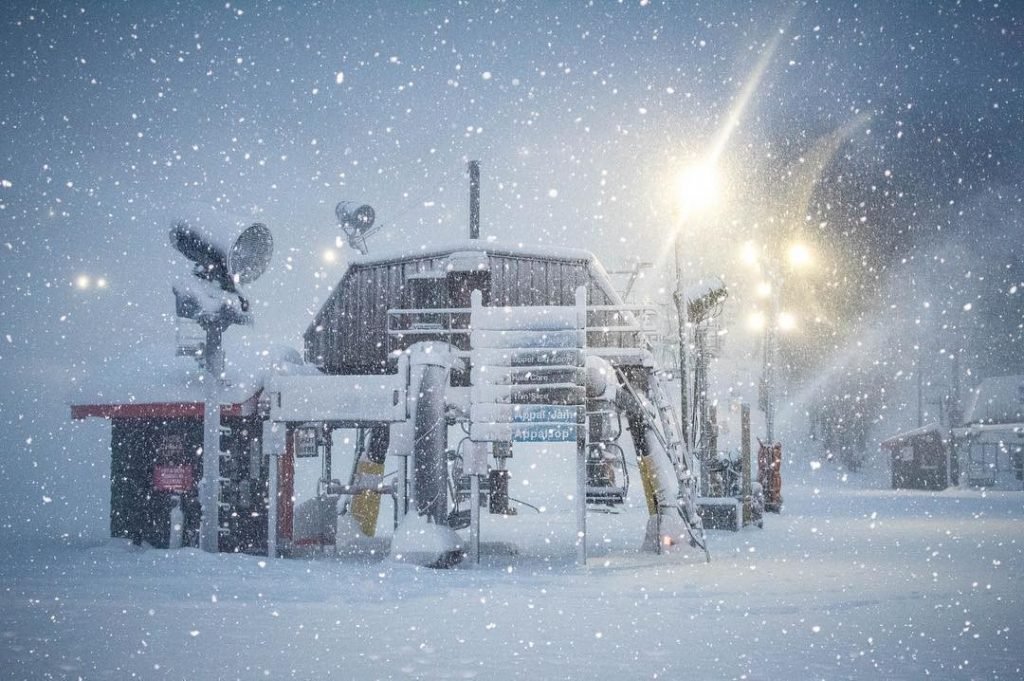 First of all let me just tell you guys to check the SNOW REPORT as there are more resorts open today than at any point so far this season.

The photo of the day (the header of this morning’s post) is from Appalachian Ski Mountain. (Pretty isn’t it?)

We have EIGHT ski areas open today and that is so awesome to see after the sluggish start. 8-10″ of snow has fallen from the southern snowstorm named “Benji”. Areas around the south that don’t normally even see snow have gotten a lot from this storm and as far as the ski resort mountains are concerned – the North Carolina ski resorts are the only real benefactor from this system. Areas further north into Virginia, West Virginia, Tennessee and Maryland have all seen from a TRACE to 2″ of snow so far.

(It’s still snowing and 1-2″ more is in the forecast for today!)

All of the pre-season/early season negativity has disappeared as snow trumps e-v-e-r-y-t-h-i-n-g! As the snow began to fall and reports of measurable snow started coming in – so did one email and/or text after another excitedly sharing opening announcements or snow pics. As the temperatures also dipped to 30° and below – the snow making systems fired up and that too got people to writing us.

However it was the moderate to heavy snowfall that REALLY got juices flowing. Kenny Griffin and I communicated early and often on Friday as one television station after another called our offices wanting to use our camera feeds. (Thanks to all of our new weather-sharing partners! I think we heard from and added five new stations to our network of 100+ meteorologists who use our content.)

Speaking of our network – we MIGHT have broken some visitor records yesterday which would only attest to more people finding about us these days as we’ve certainly had bigger snow events. By noon today we should exceed more than 100,000 visitor sessions over the last 24 hours! Kudos to theKenDog for making sure that our servers and video server can handle the load. We will have also delivered over 500,000 page views in that same period. CRAZY!

Our Network Consists of:

www.SkiSoutheast.com delivering all of the detailed content for each ski area of the region.
www.ResortCams.com – showing LIVE streams from all of your favorite mountains.
www.HighCountryWeather.com – with 17 stations reporting. (See SnowshoeWeather.com, BeechMountainWeather.com, and so on. We’ve got them all covered!

This morning’s report will be a bit random as data comes in that way. Let’s start off by mentioning that we had snow reported at 7am on FRIDAY morning. Towns and communities south of the ski areas actually had measurable snowfall when the first official CoCoRaHS reports came in for December 8th. This storm definitely favored the resorts further south.

HERE’S THE LATEST NUMBERS (and it is still snowing):

When is the last time that we’ve looked at December 9th on a calendar and seen that thus far (to date) Sugar and Beech Mountain has had more snow on the season than Snowshoe or Canaan Valley? I can’t think of a time. Yet that is where we are right now with 12″ of snow on the current season at both Beech and Sugar Mountain and 6″ at Snowshoe thus far and 11.4″ at Canaan Valley.

App Ski Mtn – 26° – 8″ of Natural Snow! – Made snow but NO SNOWMAKING TODAY on open slopes! Skating open as well. Look for yours truly (Mike) and family to be playing at App later today.

Beech Mtn – 20° – 8-10″ Natural Snow being reported across the mountain. Beech WILL be making snow! They are open with 7 of 17 trails, terrain park and ice skating for day sessions only. No night skiing. Our own Kenny Griffin and David McCue will be at Beech today and Sunday.

Cataloochee Ski Area – 9″ of snow being reported by Tammy Brown this morning as well as 6 of 18 trails to the top of their mountain. Tubing opens December 15th. No night sessions yet.

Snowshoe Mountain – 18° – It IS Snowing this morning. They are reporting a TRACE of snow so far from this storm. They lead the region in open terrain for today with 49 acres of open terrain covering 12 slopes and terrain parks.

Sugar Mountain – 21° and 10″ of natural snow and it is still falling (expecting another 1-2″)- 7 slopes and trails are open today and tonight. Ice Skating is open as well. Sugar has their tubing park open as well. Go Sugar! Kenny rode there last night and has been shooting me photos.

Ober Gatlinburg – .5″ of snow and making snow. They are open for tubing now and opening for skiing and snowboarding at NOON with 3 slopes.

Sapphire Valley – making snow at 30° and they saw 10″ of snow which is more than all of last season! They plan to open December 15th.

Canaan Valley Resort – 25° – making snow. They are planning on delaying their opening to allow for some quality snowmaking. My buddy Steve Drumheller (GM) reported that they want to open December 15th with at least ten trails and the tube park. He also reported that everyone at the Tucker County ski area is excited to see then cold weather! Also of note: THE First 100 skiers will receive a free lift ticket for the day! (I really like Canaan’s new website.)

Timberline Resort – 20° – making snow and planning to open in 4 days or so. No word from these guys.

Wintergreen Resort – 23° – it’s snowing and they are making snow to open December 15th.

Winterplace Resort – 25° – no new natural snow but they are cranking out the manmade snow to open December 15th.

Bryce Resort – 32° and getting light snow this morning but reporting no snow and NO snow making as temps were just above where needed. They are hoping to open soon. They are hoping for some cold temps to hit early in the week. Bryce posted, “If you’re stoked for winter…, we’ll be full on blasting snow until the official start of ski season! Stay tuned for an opening day announcement.”

Massanutten Resort – 26° TRACE of snow and they are making snow! They were expecting/hoping for 2″-4″ from this storm and it IS snowing now. Fingers crossed!

My man Kenny Hess posted, “Massanutten is planning to open the Ski Slopes and Snow Tubing for the 2017-18 season on Friday, December 15th! Our snow makers will be hard at work whenever we have consistent periods below 32 degrees. Our current plan (weather depending) is to open for day sessions only (9 am – 5 pm) from December 15 – December 21.”

Omni Homestead – .5″ of snow and snowing! They are making snow now at 23°! Hoping to open soon!

Those of you who have followed this website for 21+ years know that I don’t get into rumors about ski areas opening or changing management, etc. Yes, we’ve shared some news pertaining to the old Phoenix Resort (which never rose from the ashes); the 365 Indoor Ski Area (which never did anything but collect some investment monies and never got off the ground); and of course we’ve reported on the multiple changes in management or possible ownership that had taken place up at Wolf Laurel, Wolf Ridge.

Wolf Ridge Resort has had a few scenarios where there have been some potential buyers and investors that have not quite panned out.

However, on Friday I speaking with a VERY trusted millionaire, investor, and current client/friend of mine who has some luxury home communities in the region. This gentleman is a true visionary when it comes to developing luxury and upper-scale developments and his family lineage is of more of the same kind of developer who had a huge influence on Miami Beach in the 30s, 40s and 50s and beyond.

I am currently working with him on a project in the Asheville area and during our conversation the subject came up about snow. I was sharing a couple of camera views where snow was falling in the state (North Carolina) and when one of the camera stops came up he asked me what I knew about that particular ski area. After I shared what little I knew…he replied, “Funny thing Mike, my business partner is on a flight up there right now to buy the place.”

He added, “We’re going to completely re-brand it; new name, new vibe, everything.”

I told my buddy that I was going to share this tease and I promised that I would not do any kind of announcement quite yet. He replied, “I don’t care…say what you want.”

However, I’ve been around the block a few times, so I’m going to hold this news for another day or so and then see how things land. (I’ve reached out to him again this morning for a comment, but have not heard back yet.)

What I will share about this potential huge news – is IF this deal is made, the ski area in question will very quickly (within 12-24 months) rocket to the forefront as one of top ski areas in the region. This team pays a LOT of attention to detail and they go after the luxury clientele. I know a lot of our readers are traditionalist who still feel that resorts have to cater to the guy staying overnight in his car and begging for free lifties…but if we want our ski resorts to grow and do well, an infusion of money has to happen.

I Should Never Rant on a Snowy Day but…

Why in the world is not every ski area posting new photos and videos nearly everyday via Facebook, YouTube Channels, Instagram, etc.? Why do they not report natural snow? CRAZY!

Previous Post
Mountain Rules Film Series: No Work
Next Post
Loving This Weather…Snow for the 3rd Day in a Row!