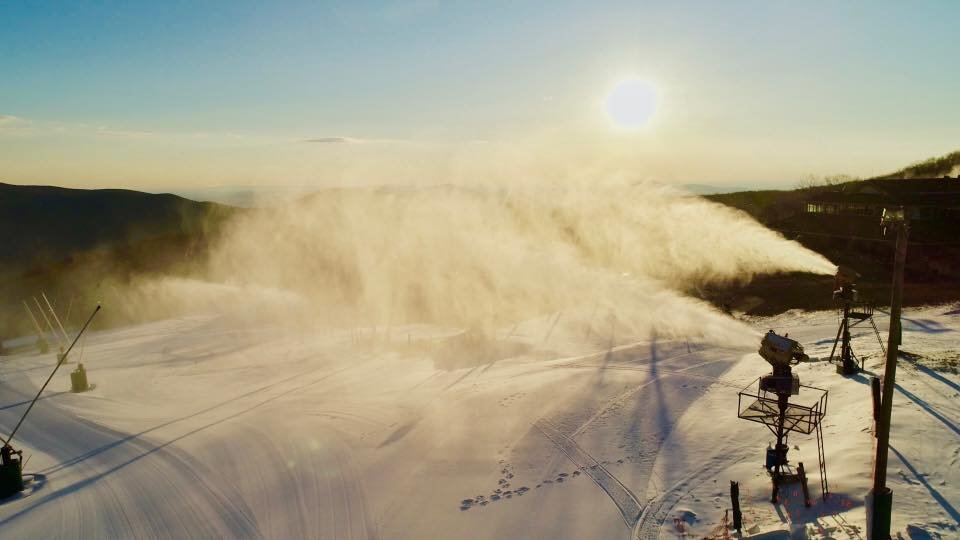 I stole the title of this post from Cataloochee’s snow report this morning.  They were describing the snowmaking going on out there and it had me chuckling.  I feel like it’s applicable to all the open ski areas this past week.  They’ve been making snow like crazy, scrambling to re-open trails, and several resorts just got dumped on with over a foot of snow.  This March rocks!

Once again this morning, we’re going to start out with the natural snow that fell in the past 24 hours.  It was pretty much limited to West Virginia and Wisp in Maryland but oh my the numbers are impressive.  Winterplace re-opened today and on top of that good news they saw 2″ of snow in the past 24 hours and 3″ in the past 48.  Things were looking a little dire out there last Thursday, but it looks like mid-winter out there now.

Timberline opened back up yesterday and they were treated to another 7.9″ of snow.  That puts them at 12.2″ of snow in the past 3 days and they hit that double digit mark, and then some, that I mentioned the other morning.

Wisp Resort saw their fair share of snow yesterday as well as they received 8″ of the white stuff.  That puts them at 10″ in the past several days.  As of this writing, it’s still dumping out there.  On a side note, their snow reporting is so weird.  They currently show 8″ in the past 24 hours and 2″ for their 48 hour snowfall.  Weird.

Winner winner chicken dinner goes to Snowshoe Mountain, who benefited from even more Cheat Mountain magic in the past 24 hours as they saw another 9″ of snow.  That puts them at 15″ of snow in the past 48 hours and has me wishing our Summit was this weekend and not last.

A little bit of natural snow fell at Sugar Mountain since yesterday morning, but other than that the remaining open ski areas in Virginia and North Carolina have seen snow of the man-made variety falling from the sky.  The App Ski Mountain webcam showed a blizzard out there this morning and Sugar was cranking out snow top to bottom as well.  Cataloochee has been dead set on providing quality late season conditions and their perseverance has been rewarded as they were able to open back to the top of the mountain yesterday.

In Virginia, Massanutten continues their late season revival as they re-open Upper Showtime and made snow once again overnight.  I continue to say I’m most impressed with their late season as they were about as close to having to call it a season as you can get.  Anyways, Wintergreen continues to hold steady with the same 8 open trails they’ve had all week, but those runs should be in good condition as they too made snow again overnight.  Bryce Resort doesn’t update their snow report that often, but from what I can tell it looks like they did not make snow.  That has got to make you wonder about their plans, if there are any, for after this weekend.

The forecast for the weekend ahead is certainly an interesting one.  Another storm system, this time from the south, moves through and could create some late weekend snow that favors areas not in central West Virginia and north.  Here’s Panovich with his latest update.

Outside of the North Carolina ski areas, Saturday looks very nice.  The West Virginia and Virginia resorts (and Wisp) all have “mostly sunny” or “partly sunny” conditions on their NWS forecasts.  App, Cat, and Sugar might see some spotty light rain but it doesn’t look like anything too terrible.

As for that Sunday storm, there’s still a ton of uncertainty right now about the track of it.  I’m looking at the weather models and they still differ greatly on where the snow will be.  For instance, the Euro shows the majority of snow in the North Carolina mountains.  The GFS shows hardly anything for NC with the Virginia ski areas getting dumped on.  It’ll be interesting to see how it unfolds.  Check back in with Mike and Brad all weekend as they will keep you updated.

It should be a fun weekend!  This week’s cold, snow, and snowmaking has allowed for some pretty sweet late season conditions.  There’s ten open ski areas in the region for you to choose from, so make sure to get it while you can.

Previous Post
Ski Southeast Forecast for March 8th, 2018: The Great March weather keeps getting better.
Next Post
Some Resorts Stopped Cold Turkey, While Others Play On With Natural Snow and Great Conditions!