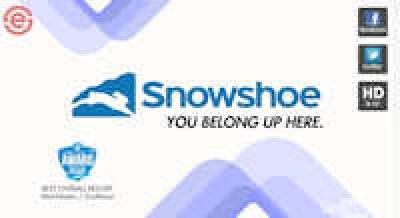 I would be remiss if I didn’t credit today’s news and update with the title provided above. We’re now into "near-mid" October and Autumn color is bursting out everywhere at the higher elevations of the Southeast and Mid Atlantic. Back in late September I set out to provide a better "Fall Foliage" report for the region than I’ve seen elsewhere. I’ve updated some photos here and over at www.ResortCams.com , and I’ve attempted to provide a bit of insight as to how things are progressing.

However I have to tell you that it’s HARD to do that job as well as I’d like. If things were as I’d love them to be – my perfect job would be to "better sell" you guys on just how blessed those of us who live in these mountains are. I’d capture a video of every chipmunk that scampers across the roadways this time of year. They do so across roadways that are currently blanketed with a patchwork of Autumn leaves.

If I had my way I’d show you guys content from every beloved ski community in a way that will have all of you drop everything else that is going on in your lives and simply move to the mountains. We live in heaven here and I just want to share what little bit of that I can. Some would argue, "NOOOO, don’t do that because it’s getting too darned crowded up here already!" I guess I’d have to agree.

So I guess I’d love to shout the praises of these communities to all who will listen, and perhaps just entice you to visit once in a while.

That said, I’ll give myself a high "C" for presenting some new content that has hopefully helped a few thousand of you to head to the mountains over the last couple of weeks. There are Fall Festivals EVERYWHERE. I’d have to quit my real job to come close to sharing where they’re all happening…and to do justice to them.

Before I ramble on, some areas such as up around Snowshoe Mountain in West Virginia, Grandfather Mountain, Mount Mitchell State Park and Beech Mountain – elevations above 4500′ – are a bit past peak color right now, however FROM THOSE high elevations you can witness some glorious color in the valleys below RIGHT NOW. 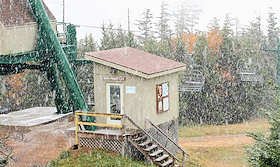 Monday I heard from Krysty Ronchetti, the new PR Rep for Snowshoe, and my old pal Ed Schneider, who is Snowshoe Mountain Producer. Ed (yet again) sent me another beautiful piece of work in the form of a video that showed off Monday’s snow that fell. Ed not only showed how beautiful and exciting the snow was…but how beautiful Snowshoe is right now with the mix of Autumn color and the greenery of the evergreens. You guys should look at that video at: https://www.skisoutheast.com/videos/

While you’re at it stick around and look at the videos that Ed sent on October 1st; view the video for Snowshoe’s announced NEW GLADED TERRAIN!

I’m only semi kidding Ed! The fact is Ed HOPEFULLY is enjoying life. I think he is as it comes across in the "work" he’s doing. You can’t fake the kind of appreciation and enjoyment he gets from the trees, the job, the snows, etc.

As many of you also know – I have pledged to take SkiSoutheast.com and our winter tourism network to places we’ve hoped and dreamed for since we started back in 1996. To that end we are advertising right now for a communications person to come to "work" with us and take our message out to even more media outlets than ever before. We’ve added Herb Stevens (the Skiing Weatherman) of national weather fame to our team. We are days away from revealing our new website. It will be "TWEET"!

However, the more I watched all of Ed Schneider Snowshoe videos, the more I became jealous. The man is doing exactly what I wish I could do…full time. Maybe one day when I grow up. Until then you have my word that we’ll hire who and what we need to do that job for us…for you. More information, more videos, more…EVERYTHING.

This will be out SEVENTEENTH season of bragging on and reporting about the ski communities of the Southeast and Mid Atlantic. If I get my wish one day soon…I’ll have Ed’s job. (No not really Ed…but you guys get the drift.)

A lot of peeps will be heading to Sugar Mountain and other locations this weekend for whatever community version of Oktoberfest there are around. I’ll be over at Sugar doing video for the 3rd year in a row. The following weekend is the Woolly Worm Festival. Good grief that’s hard to believe!

With the forecast for a cold, snowy winter…this should be fun.

Until then, I’ll update a few more Fall Foliage blogs over on www.ResortCams.com  and we’ll be back with you guys soon.  By the way, there are some AWESOME CAMERAS showing fall colors right now!

In the meantime, be sure to email me any fall foliage and festival photos and information you have and we’ll talk about it here.

Email me comments, photos, video and more if you like at: [email protected]