From Meh to a Winter Wonderland in 24 to 48 Hours. Happy World Snow Day! 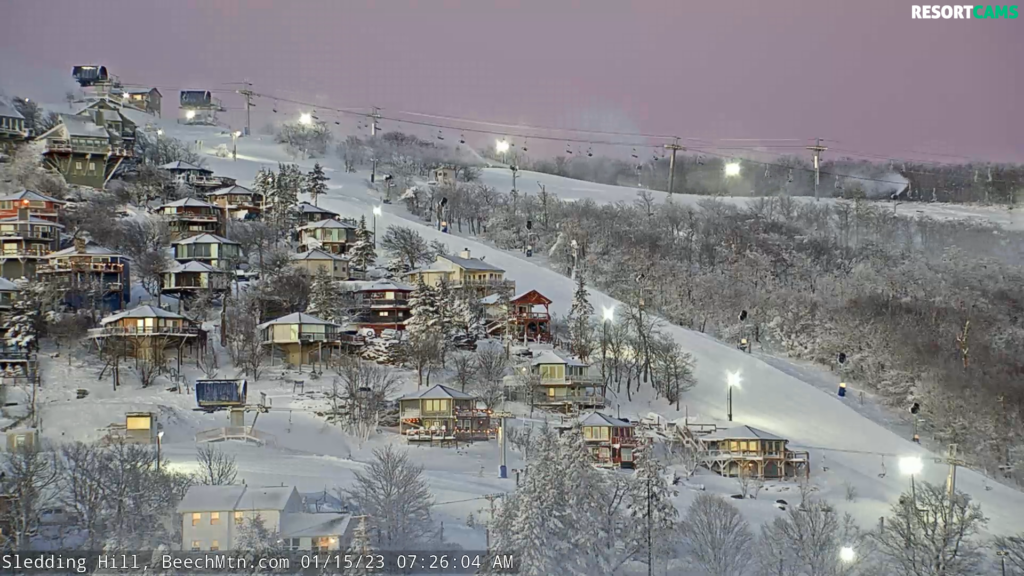 Sunday ramble coming your way. Today is my day to simply exhibit my best, digital nomad skills and share whatever stream of content share that comes to me…as it comes to me. I’ll warn you, I DID fall out of bed and clobber my head last night…so I could be concussed! Haha!

It is VERY cold this morning with mid-teen low temperatures and that has the snowmaking crews cranking out mountains (and whales) of snow.

Clouds of real and manmade snow and sometimes a cloud of both are messing with the cams this morning or we’d show you every view. I will share many Photo of the Day candidates today and you guys should also check out: https://www.resortcams.com/webcams/ober-gatlinburg/ as this is the most snow I’ve seen at Ober Mountain in a few years.

Hey guys and gals – I don’t know why I haven’t shared this little secret with you sooner, but all of us enjoy sunrises and sunsets, right? I’m here to tell you that you should set your alarms for 7am or just a bit earlier and jump on the mountain cams of ResortCams.com. Simply, visit each of the cameras in rotation and check them every few minutes later. What you’ll witness is calming magic…and especially so after a beautiful snowfall like we had on Friday and Saturday.

Be sure to expand to full screen on each to get the full effect, but it is one of my favorite morning rituals. I’ll grab a cup of coffee and make the tour, often before looking at any snow reports or snow totals.

Here are some of my favs this morning: 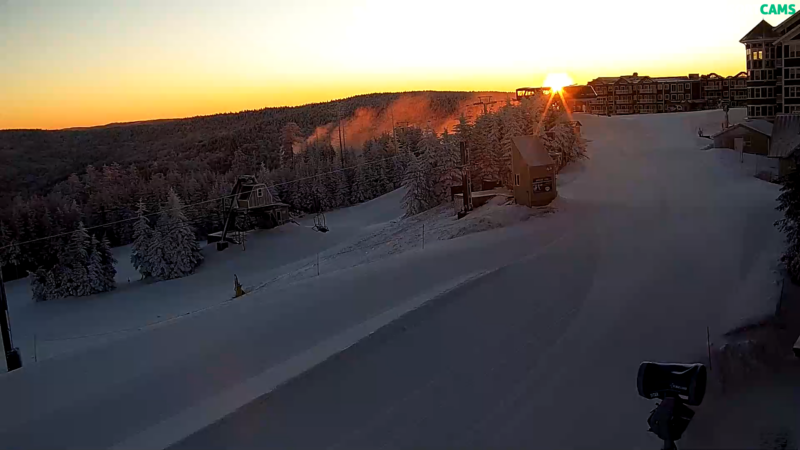 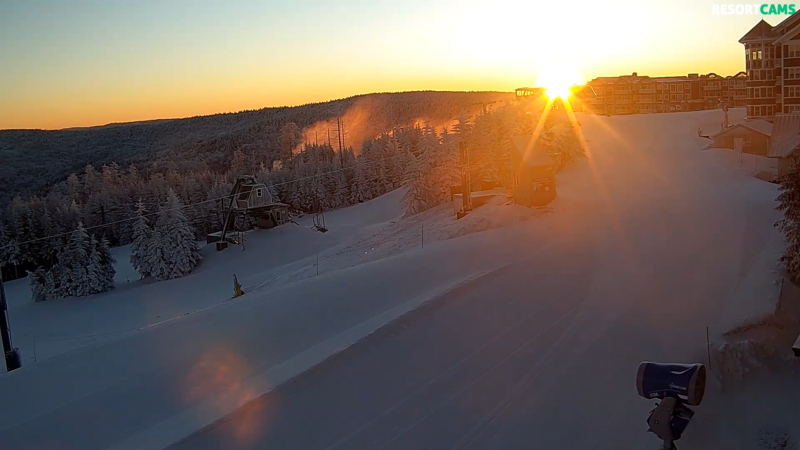 I REALLY had a hard time picking my choice for Photo of the Day…but the one used up top is not doctored in anyway. I’ve shared it here as well:

It is always interesting to me that when touring resorts in each state, you’ll often get such a wide range of weather happening. This morning, many of the high elevations were still clouded with some natural snow, or manmade, snow-globes…while others were already displaying Chamber of Commerce blue skies. I really enjoy the “kodak moments” when the skies are clear and the sun is accentuating the snow-covered mountaintops and ranges.

Something ODD this Morning at Sugar and Beech Mountain

Check out the time stamp on the photos. It was 8am and Sugar and Beech were both already allowing guests on the chairs. 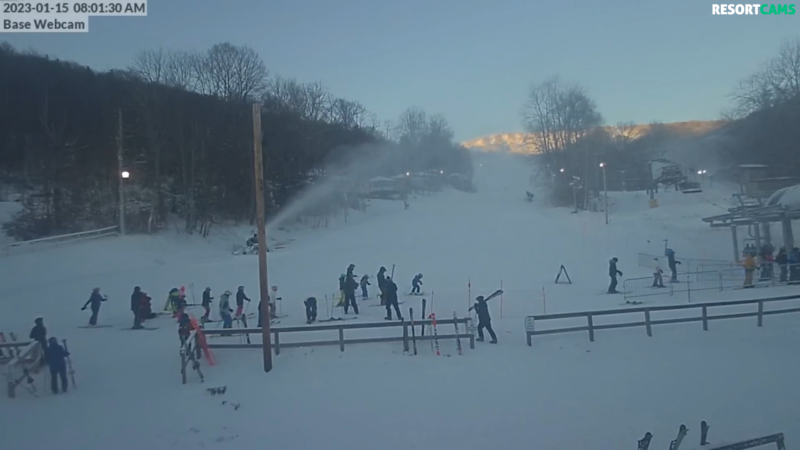 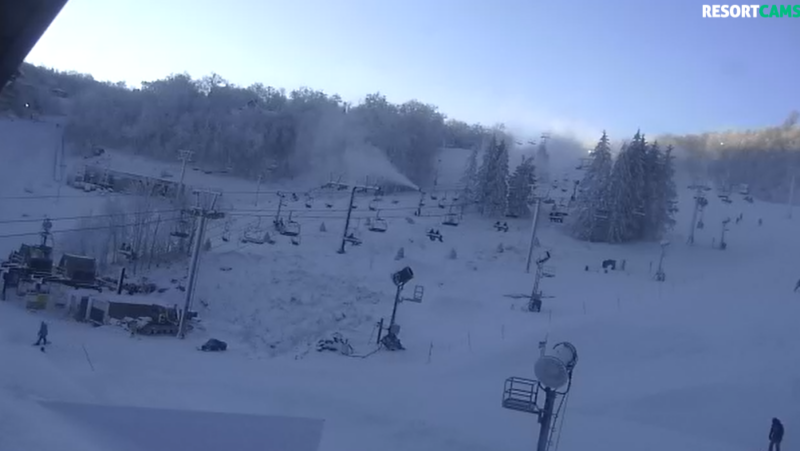 I had to double check my watch and phone for the time. JUST BEECH and SUGAR were doing this as far as I could tell.

I REALLY, REALLY like Brad Moretz of Appalachian Ski Mountain and their entire team. They are pound-for-pound, the best ran ski area in the region. However, over the last year or so, someone – either Brad himself or whoever handles the marketing duties these days – decided to start reporting MANMADE SNOW created in the “NEW SNOW” field of their snow report. See below:

I first saw that happening over at Sapphire Valley and I can almost understand why THEY would do that because they rarely receive natural snowfall. However, if you are a novice visitor to ski resorts and you hop on Appalachian’s ski report (especially after a little snowstorm like we just had) and you see TWENTY-FOUR INCHES OF NEW SNOW, you might be inclined to go ski there, instead of where, say Sugar Mountain reported 4″.

It just isn’t a good look, no matter how you cut it. Hopefully, they will cease that practice.

I used to give App’s Steve Stanley a good bit of ribbing about their reported base-depths and Brad ribbed me right back as he would invite me over to prove their base report totals. Well, Brad might need to invite me back over as Appalachian Ski Mountain is not only reporting 24″ of NEW SNOW (they got perhaps 2.5″ since Friday…total) they are ALSO reporting a growth of 42″ of base depth in 24 hours. 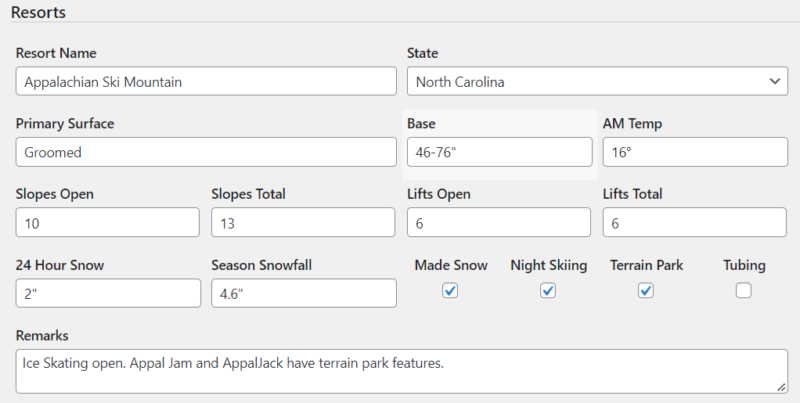 …I REALLY hope this “NEW SNOW” trend doesn’t catch on elsewhere as we will have to break out our old “NO BULL SNOW REPORTS” graphics.

One would have to wonder if the whole world was off of its axis a bit when Sugar Mountain Resort looks like the most trusted resort in reporting. They have been SPOT ON all season in terms of snowfall reporting AND they are typically the most accurate with their updates in sharing Loose granular, etc. By the way, Sugar is reporting 5″ of natural snowfall from the two-day storm and 12″ on the season…which is only 1″ off of what we are reporting from the official NWS data.

To sum up this NO BULL REPORTING share…I want to borrow a phrase from one of my favorite sports radio teams… Rick Neuheisel and Chris Childers. The do a show called Full Ride on Sirius XM and one of their segments is where they trash on a player or coach who is doing something contrary to the betterment of the game of football. They call it “Get Yourself Together” and they take turns calling someone out. They have even picked on heavyweights like Nick Saban of Alabama.

So in honor of Rick and the Show Pony, I will end this segment by saying, “Come on Brad (and any other ski area that wants mislead visitors by posting manmade snow to NEW SNOW, when we’ve always seen that spot used to report new NATURAL SNOW) Get Yourself Together!”

Boy it has a little while since I cracked on base depth reporting. That felt good! 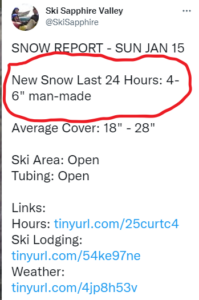 Editor’s Note: As I was confirming the snow reports, I ran across this from Sapphire Valley. Looks like they have been paying attention to our NO BULL REPORTS and pleas to “keep it real”.

At LEAST they reported the NEW SNOW as man-made. That would be appropriate and acceptable. But simply putting a number in the NEW SNOW column when NO new snow fell, is a bit disingenuous in my humble opinion. 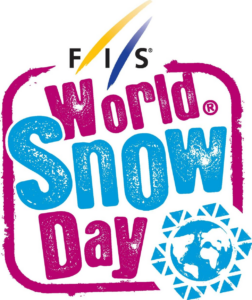 World Snow Day is observed on the third Sunday in January each year, and was created by the International Ski Federation (FIS).

I hope YOU will celebrate World Snow Day by playing in some snow. Come on up to the mountains as there’s lot of it on the ground right now.

On Saturday, I shared that the Ski Areas Management Association is sponsoring “I Am A Snowmaker” contest, sponsored by HKD Snowmakers and you can vote for Bryce Resort and Massanutten Resort in Virginia.

Here are the links to vote AND you can vote DAILY!

VOTE FOR BRYCE! at: https://www.saminfo.com/i-am-a-snowmaker?start=2

VOTE FOR MASSANUTTEN! at: https://www.saminfo.com/i-am-a-snowmaker?start=4

Vote for both as they are brother resorts to all of our Southeast and mid-Atlantic ski areas featured here on SkiSoutheast.com

CHECK THE SNOW REPORT for all of the deets. Just know that some ski areas ARE 100% open and many are creeping up their trail counts to be as close as they’ve been all season to BEING 100% open.

RIVERBOAT GAMBLERS I TELL YOU

I was on a podcast recently and the interviewers are skiers but not all that “in the know” about how ski area mountain ops have to pivot on a dime to keep things going smoothly. About twenty years or so ago I was talking with Leonard Cottom of Hawksnest Ski Resort and he was the first to ever share the sentiment or comparison to ski area owners and managers being like “riverboat gamblers”.

I was reminded of that conversation when just this past Friday morning we were seeing ski areas being hit with heavy rain, gusty winds and even hail. That had places like Sapphire Valley NOT able to open. Temperatures over there were 50° and they had almost NO snow on the slopes or tubing park.

Fast forward 24-48 hours later and they have the slopes open and a few dozen resort guests are awaiting the green light to hit the mountain up at 9:40am.

Multiply that mentality and anxiety level tenfold at the larger ski areas.

Snowshoe Mountain shared this sweet run down Little Spruce to Fox Chase on the Silver Creek side of the mountain. Enjoy!

KUDOS to Timberline Mountain as they are back to 100% open again with all 20 slopes and trails.