Friday Was A BLAST; The Weekend Brings More Snow to the Mountains!

I almost don’t know where to start today. So I’ll just dive right in with no real direction and share what I have to share today!

We ALL love some corduroy, and that effect is on display at most of the resorts in the Southeast as the Photo of the Day from our own, Kenny Griffin attests to.

Here are a couple from Beech Mountain on Friday: 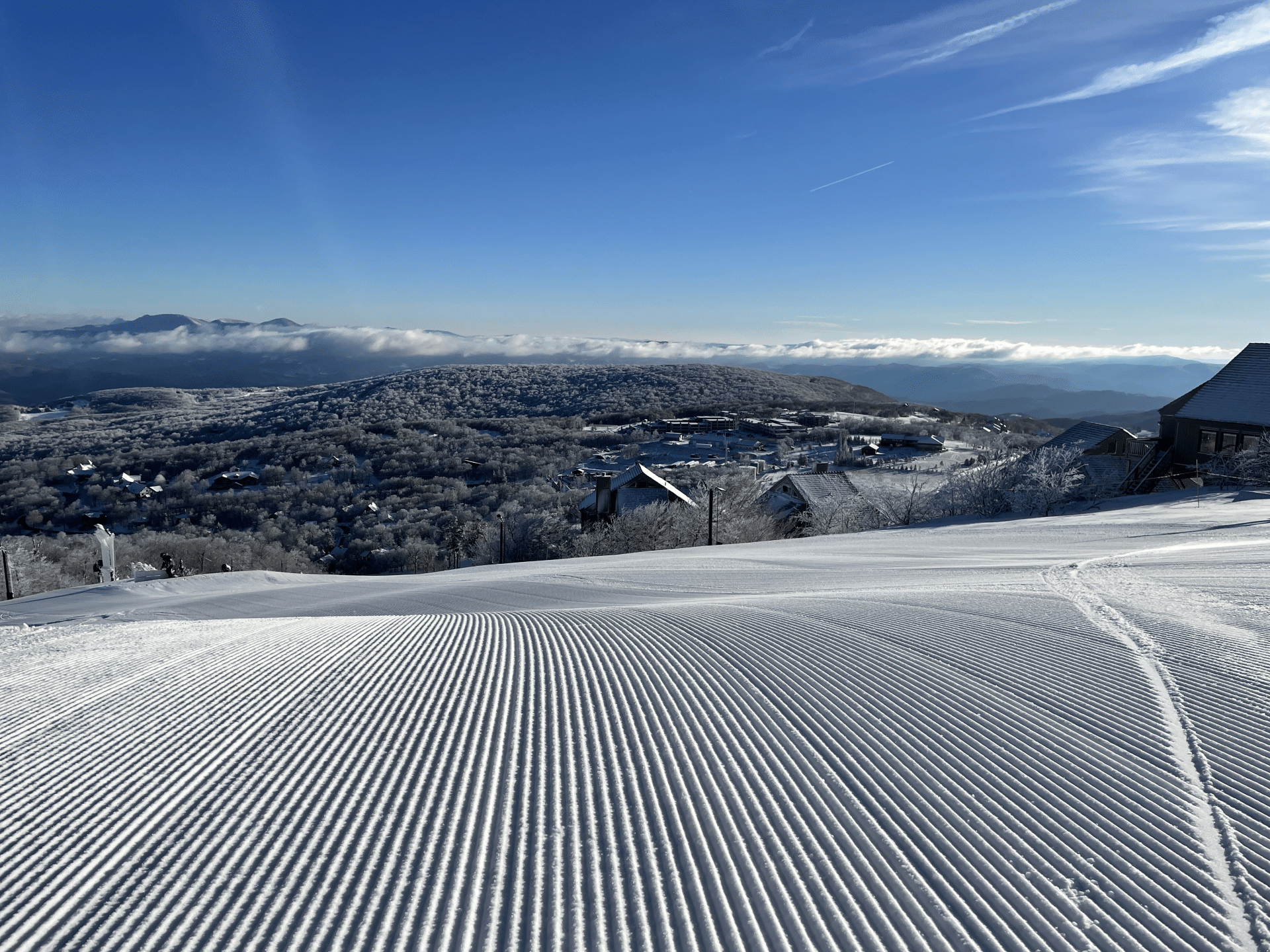 Beech Mountain Resort was in rare form on Friday. Photo by Kenny Griffin. Click to Enlarge! 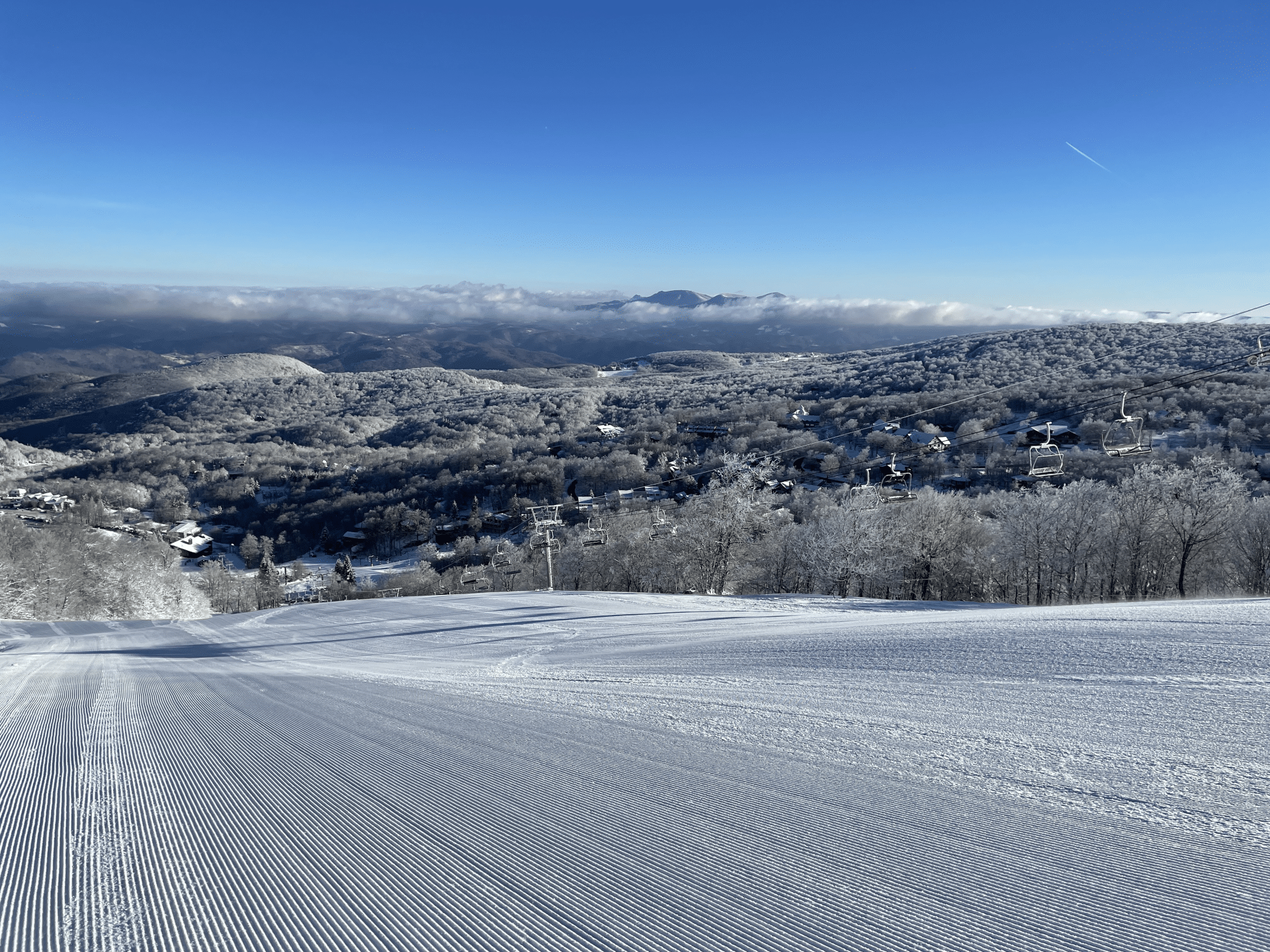 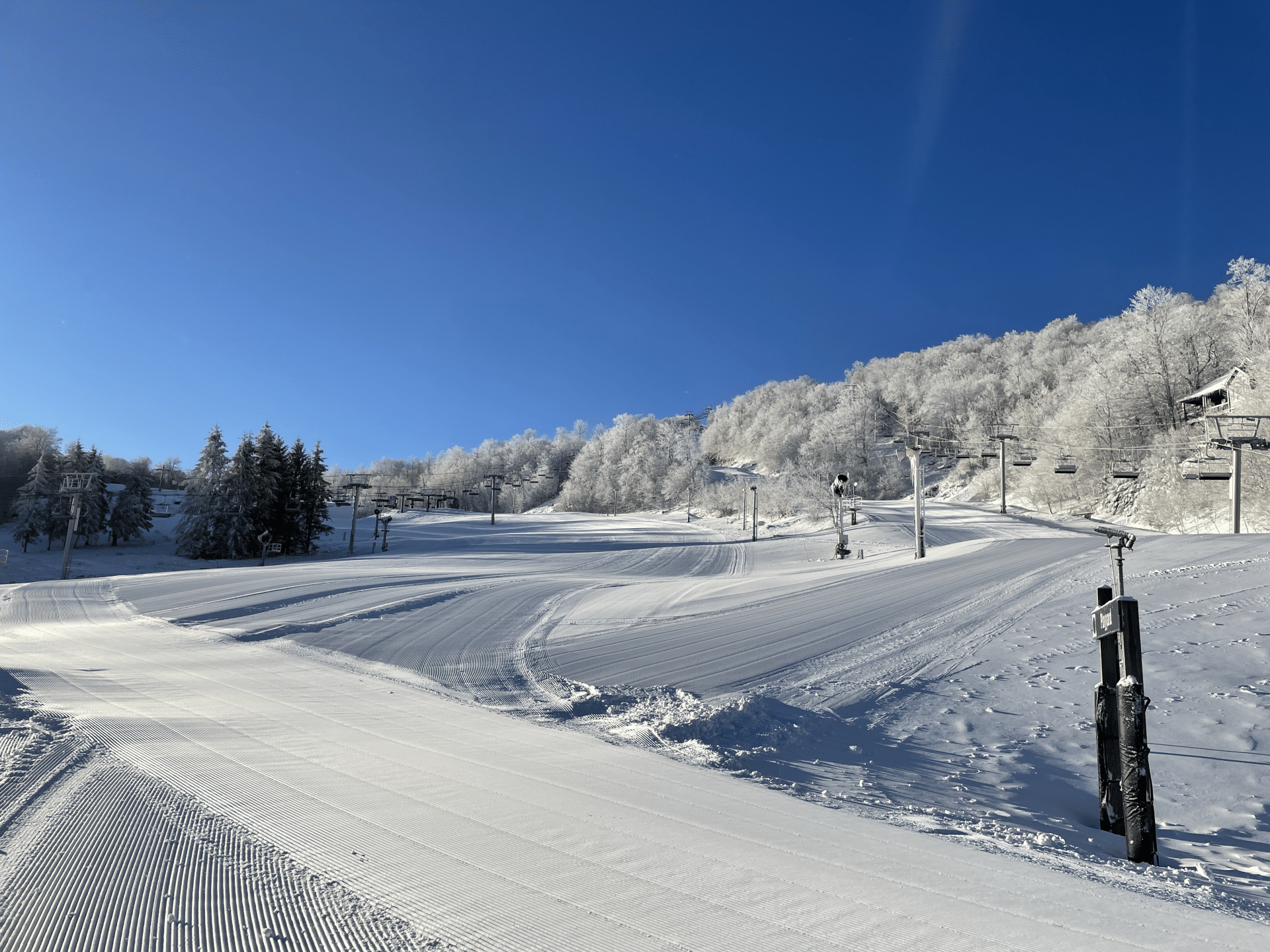 A full shot at Kenny’s Photo of the Day from Beech Mountain. Click to Enlarge!

Since I’m on BEECH right now…Here is a nice top-to-bottom run by Kenny Griffin. Stick around until the end of the video as he shares a nice Snow Tubing run. I LOVE the effect of showing NO CAMERA STICK.

Joe Stevens organized a nice thank you of all of the resort employees who have gone above and beyond this season to bring guests a great experience on and off the snow at the resorts in West Virginia. While resort staffers have heard way more complaints than usual this season due to staff shortages and from guests who don’t like being told to “MASK-UP”, the TRUTH IS, far more guests appreciate their hard work.

Guests say thank you to the hard-working people at each of the resorts who are making this season GREAT, despite the challenges of staff shortages, covid and more.
@Canaan Valley Resort
@Snowshoe Mountain
@Winterplace Ski Resort
@Timberline Mountain

Mark Moody – Another good one from Canaan Valley Resort

In Today’s First Tracks, Mark joins Pete from Canaan Valley Ski Patrol for a run down Meadows 1. Watch along for a smooth run down this freshly groomed black diamond.

A dozen of my staff and friends played hooky from work on Friday and played at Beech Mountain Resort and I have to tell you that the quick summary of the day is that it was simply one of the best days of skiing and fun that I have had in a few years skiing in North Carolina. That sentiment was echoed by several of my crew and friends who texted me throughout the evening.

The weather was frigid (8° or so) early and the winds were rather brisk up top, which created some icy headaches to exposed skin, etc., but none of that kept anyone from having a blast. On Friday’s FirsTrax post I mentioned how Beech had “warned” me that it was going to be a packed crowd and it began to be that by around 11:30am, but by then we had all made laps down Upper & Lower Shawneehaw, Robbins Run (a few times), White Lightning (a few times) and even over onto the Oz Run. The conditions were simply awesome. As we were waiting to hit the slopes at 8:45am I witnessed Beech Mountain Resort General Manager, Ryan Costin manning one of the two groomers that were laying down some sweet grooming. 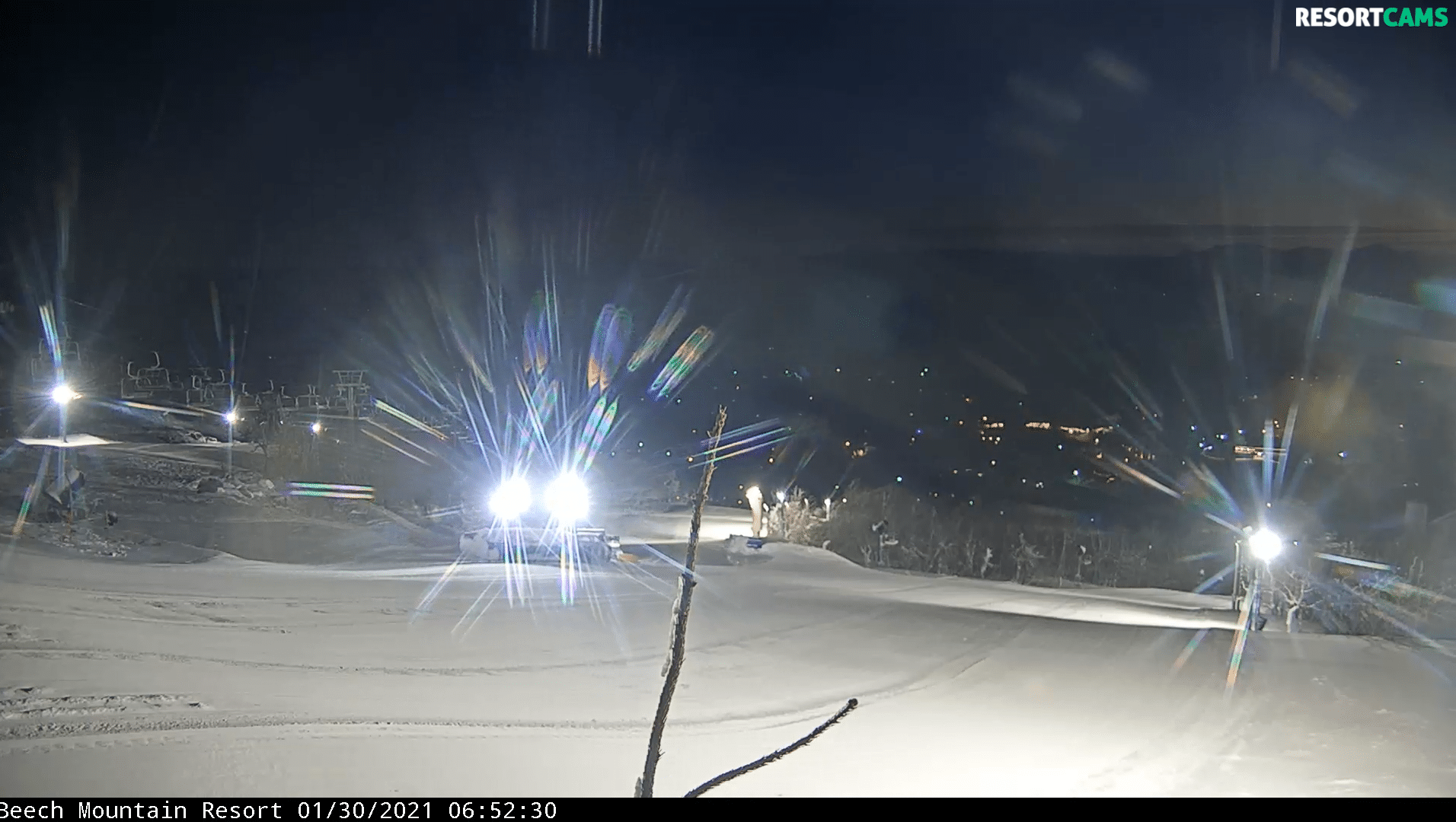 We had a couple of newbies with us and they all had a great first real day on the slopes. The lift lines down at the bottom were non-existent until 11:30am and we took that opportunity to visit The Beech Mountain Brewery Tap Room & Grill for some brews. At around 1pm we noticed that the lift line at Lift 5 had disappeared as many were going inside to warm up and eat. So we hit the mountain again for four additional laps. The crazy thing was that although the main Quad lift (Lift 5) had no lift line, the beginning terrain and lift 4 had lines perhaps 30 minutes long.

That supports what we all know about southern skiing – as the VAST, VAST majority of people skiing or snowboarding with us are newbies, relative newbies and first timers. Regardless, we got in another 3-4 runs down until the quad lines ballooned.

On Friday’s FirsTrax I also mentioned Beech’s advise to me about getting to the mountain early to ensure I got a parking space. I arrived at Beech around 7:15am and I was the FIRST to park in Lot #2, which is closest to the Village and the Quad. However, upon LEAVING at 2pm – OMG – it was a madhouse. 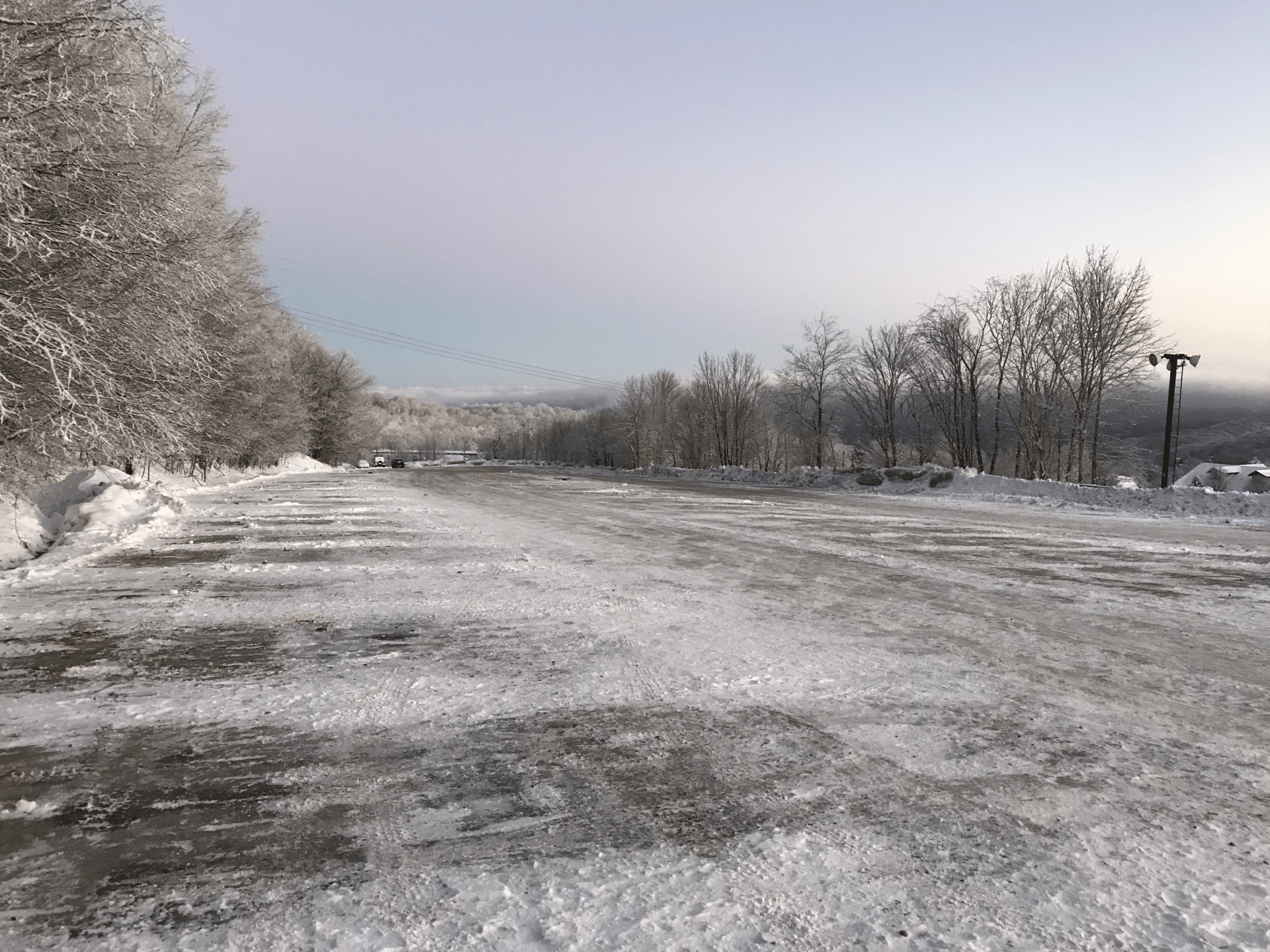 But I had ROCK STAR parking as the first guy in the lot!

I have repeated this particular exclamation so many times this season that I have lost count, but I have NEVER seen Beech Mountain THAT crowded. All of the lots were not only FULL to CAPACITY, but people were parking along the sides of the access roads, making the entries and exits to Beech and the parking lots little more than a one-lane road in and out. As I got to the exit of the resort (on Beech Mountain Parkway) vehicles were backed up trying to turn in, most of the drive out…and about half-way to Fred’s Mercantile.

All of those people coming in MUST have been arriving for night session, because there was no chance they’d get on the snow until then. (By the way, today is SOLD OUT at Beech for day sessions.)

As I was driving home, I received a text from a friend in South Carolina wanting to know if I could help some of their friends out with lift passes for President’s Day Weekend. I had to quickly let them know that nearly every ski resort in the region is already SOLD OUT for that last holiday weekend of the season…but then so are MOST weekends the rest of the way.

Again, I have NEVER seen anything LIKE what we are witnessing this season in terms of traffic and skier interest.

One last indication of skier-visit craziness:

I have been a college football fan for decades and when a football game is sold out I have communicated online hundreds of times to get ahold of tickets. I never thought I’d see the day where that phenomenon carried over to getting lift tickets from SOLD OUT ski resorts.

Over the last few days I have witnessed it dozens of times on Facebook (per resorts) where guests are posting the need and desire to buy tickets from people who already have them. Cody Ceresi posted via Facebook late on Friday (about Beech Mountain), “Anyone got an extra pass I can buy off their hands???”

Jena Carter Bush (per Wintergreen) posted: “Any snow tubing tickets available for 4 peoplpe on Saturday! Anytime! It’s my birthday and we also had no idea they would sell out. WILLING TO PAY EXTRA!”

(They were immediately DM’d by someone.)

This is happening everywhere?

The Gift of Great Weather Just Keeps on Giving…

We are now at the halfway point in the 2020-2021 Ski & Snowboarding Season and it’s been a record breaker for most resorts in the region. The conditions have not been this good at every ski resort in the region in many years and the forecast is pretty awesome.

Wintergreen Resort in Virginia is expecting 1-3″ of snow tonight and another 3-7″ of snow for Sunday with accummulations getting up to perhaps 10″! Ditto that forecast for Omni Homestead Resort which is looking a tweak snowier.

Massanutten Resort has only seen 6.5″ of natural snow on the season and they could double that with this weekend’s snowy forecast. Anywhere from 4-8″ of snow is expected there.

We’re expecting 4-8″ of new snow from this afternoon through Sunday and into Monday for Beech Mountain and the High Country of Western North Carolina and the temps will allow snowmaking through Thursday of next week.

Winterplace Resort looks like they should pick up 5″ or more snow.

Snowshoe Mountain Resort is forecasted to get 2-4″ tonight and another 3-5″ Sunday into Monday for perhaps 6-10″ of snowfall.

Canaan Valley Resort & Timberline Resort looks to be a notch less in the way of snowfall, but they should still see 4-7″ of new snow.

Things may change a bit as the weather usually DOES at the mountaintops, but right now, those ski areas in the Southwestern Portion of North Carolina and Tennessee, which include Ober Gatlinburg, Cataloochee and Wolf Ridge Resort, look a bit borderline as they may see freezing rain, sleet, some snow and rain. That could change, so stay tuned.

Here are some Notable Captures from this morning: 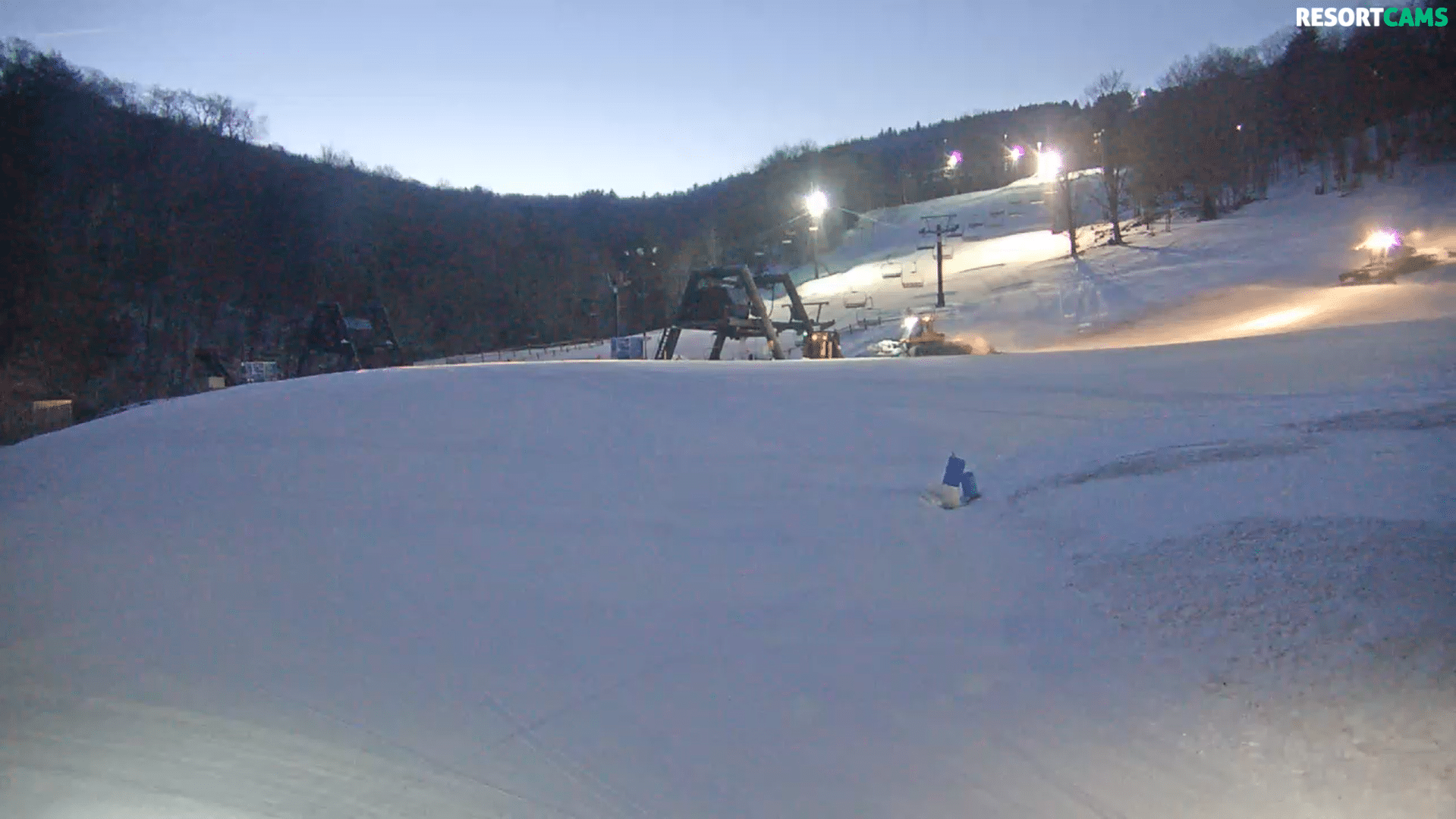 Sweet view at Canaan Valley this morning. Click to Enlarge! 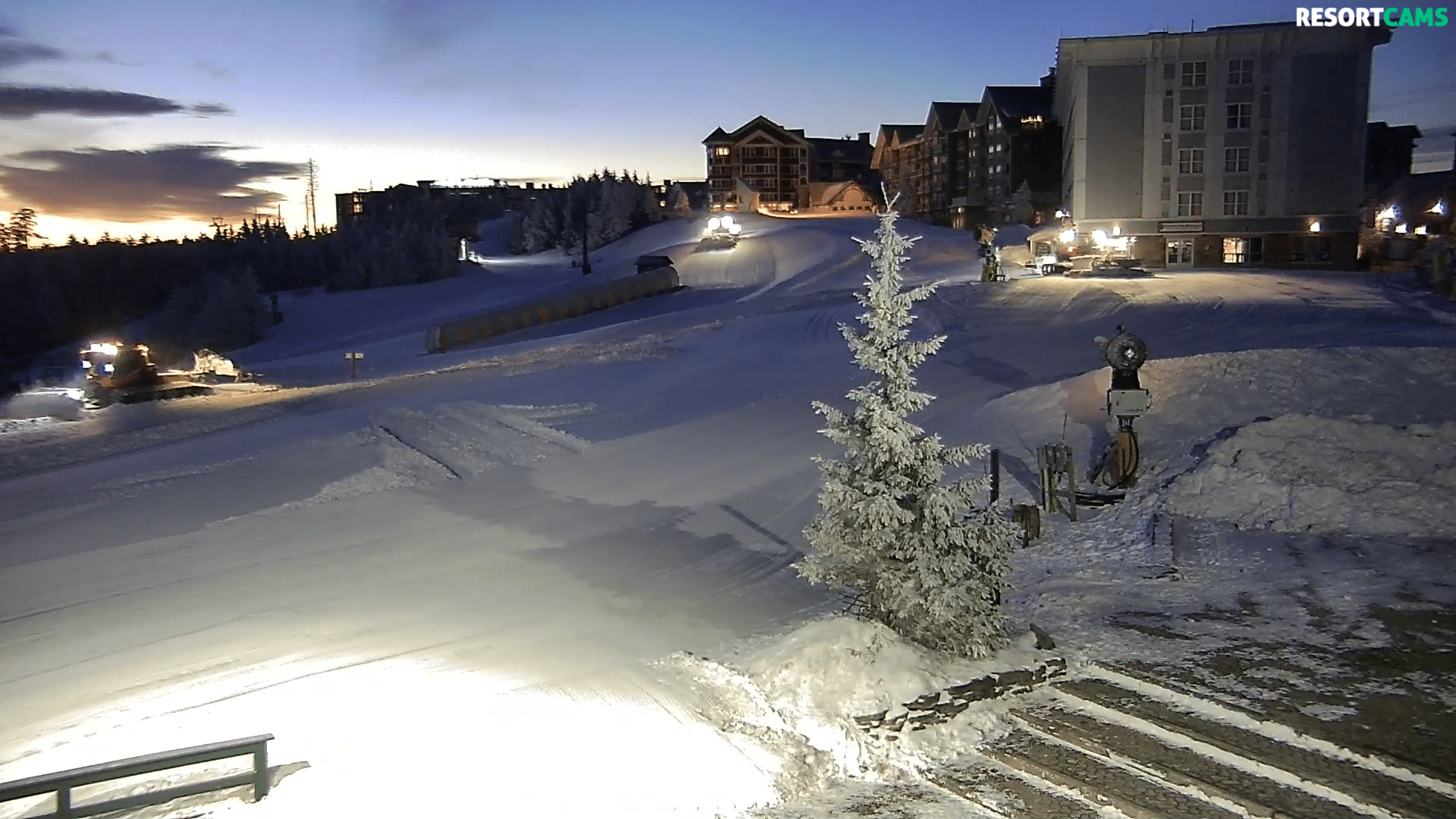 Always worth a capture at Snowshoe Mountain. Click to Enlarge! Three groomers are at the top. 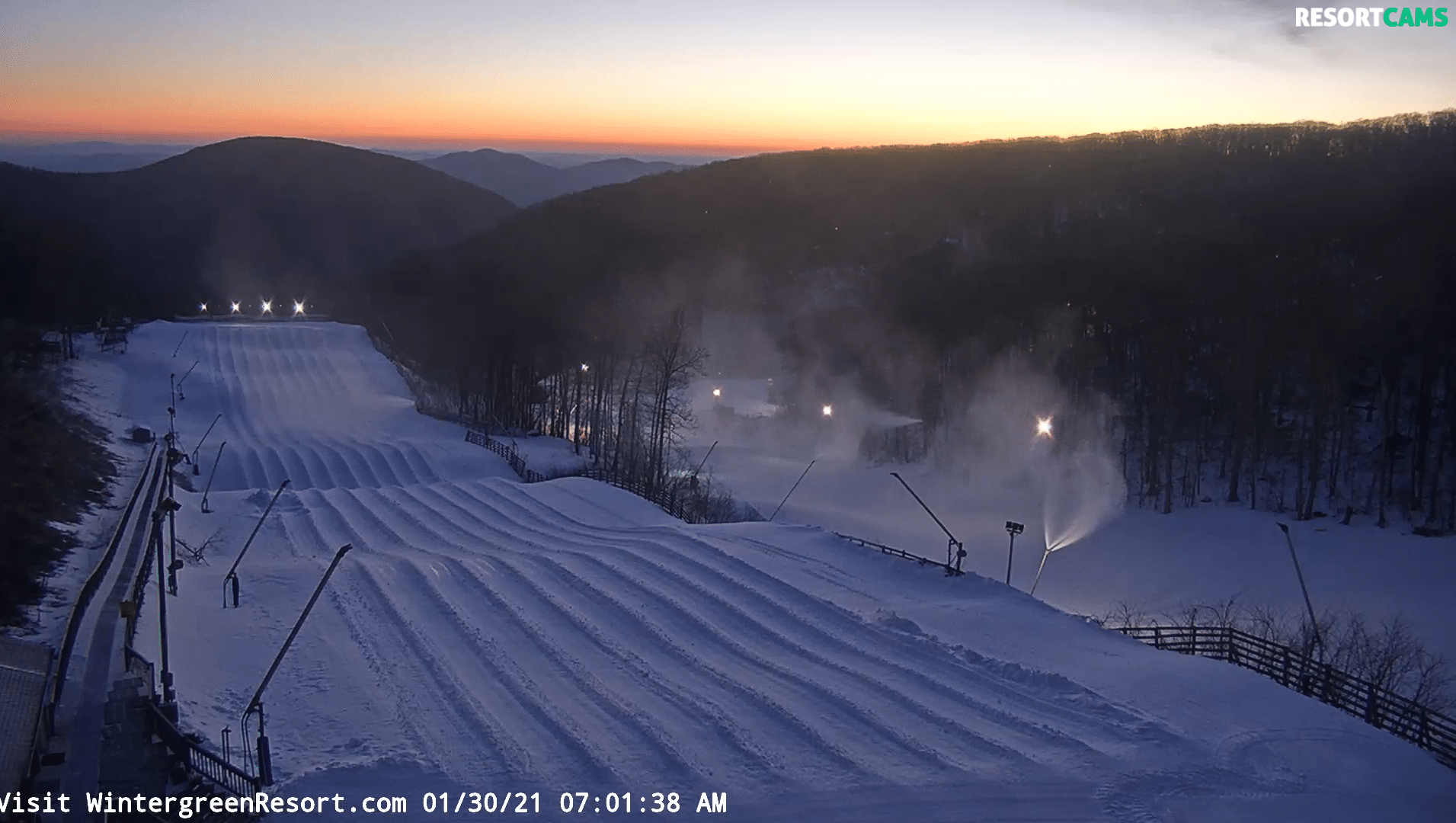 Wintergreen sunrise over the tubing park! Click to Enlarge!

If the snowfall comes in later this evening as forecasted, I will jump on and share some LIVE streams. Until then, enjoy your day.

Beautiful and Bright Day On Tap