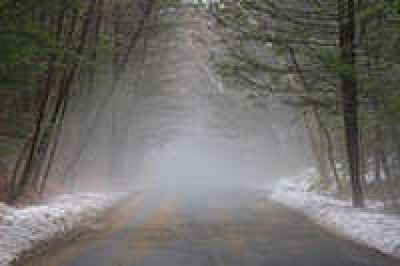 According to folklore, “For every fog in August, there will be a snowfall.”

Fogs in August (to date):

The first full week of August is NOW behind us and snow lovers may want to put some "stock" into this little bit of folklore:

"If the first week in August is unusually warm, the coming winter will be snowy and long.”

Obviously that bit of lore went out the window during the winter of 2011-2012. I should have known it was going to be a mild winter when I don’t think I had to rake up ONE acorn from my yard last Autumn.

I guess it is safe to say that July was indeed warmer than usual around these parts. We’ll take the "hard winter" but hopefully it won’t be a dry one.

I was reading the Bible this morning (which I usually do each morning) and coincidentally I came upon the part where Jesus was blasting some people who were not seeing the signs of things to come. He admonished those who were listening, "Whenever you see a cloud rising out of the west, immediately you say, ‘A shower is coming’; and so it is. And when you see the south wind blow, you say, ‘There will be hot weather’; and there is. You can discern the face of the sky and of the earth, but how is it you do not discern this time?"

He was obviously alluding to being able to discern the near immediate weather by understanding the signs provided them in nature. That was some 2000 years ago and I’m pretty certain that was before weather.com (or ANY dot com for that matter).

While many of us in the 21st century may think weather lore is more whimsical that wise, it’s hard to discount all of these “natural forecasters,” especially when they prove to be true.

While not all weather lore is accurate, there are many sayings that prove to be on the mark time and time again. When you examine weather lore, you realize that the basics of this weather predicting method are careful observations that have been made over many years. Weather lore relies on the notion that there is a strong cause-and-effect relationship between nature and the weather.

As we move deeper into August, September and begin to see some leaves turning (and acorns falling) we’ll no doubt begin to receive short and long terms winter forecasts from the NWS, the Old Farmer’s Almanac and others. We’ll toss in some Ray Russell commentaries as well as the forecasts of the woolly worm and any other critter that will talk to us – especially if they forecast deep snows and cold temps.

More to come – stay tuned as we update the foggy mornings each morning in August.

Previous Post
We’re Scurringly Around More than the Chipmunks and Groundhogs Right now!
Next Post
Twenty Five Days of Snow this Winter?