A Foggy Morning Across the Region 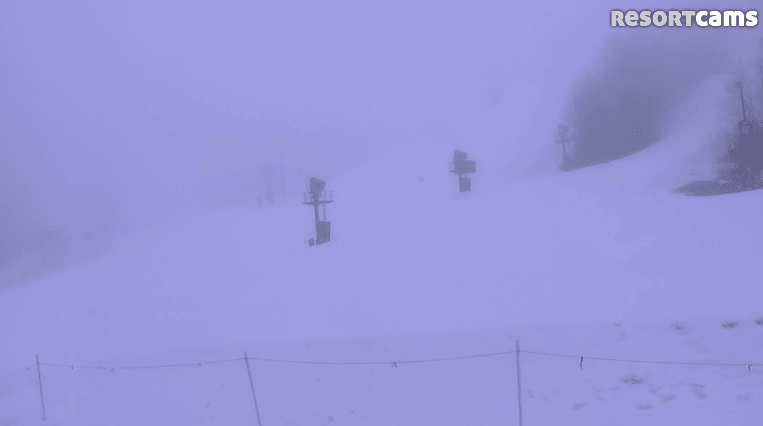 It’s kind of a blegh morning at the ski areas across the region right now.  There’s lots of clouds and fog to deal with this morning.  The current conditions on Snowshoe’s morning snow report said ice pellets.  Eek.  I’d rather have ice pellets than rain though.

The good news is that temperatures are on the chilly side.  A front moved through overnight and while it may be foggy and what not, temperatures are cold enough to keep the snow in good shape.  Snowmaking should resume today and tonight at a lot of areas if they haven’t already.  While it is going to be cold enough for snowmaking over the next few days, the wintry mix that I mentioned yesterday is still in play for later today and tomorrow.  Just a heads up on that.

It’s going to be cold enough at some of the resorts so that they can get a nice multi-day window of around the clock snowmaking in.  Wintergreen plans on doing that based on their morning blog.

“The forecasts suggests around the clock snowmaking for the next few days and overnight snowmaking leading into the weekend.  We will close a couple trails today for intense snowmaking and make less snow on open slopes.”

Sweet.  The weekend is still lining up to be a good one.  It’ll be our second good one in a row.  It’s hard to remember that happening this year, as it seems like the weather has been up and down all season.  It’s coming at a perfect time too with the holiday weekend.

Speaking of good weekends, check out the video below that Kenny Hess sent us from Massanutten.  It’s a behind the scenes look at racing at Massanutten this past weekend.  Man, that place looks to be in great shape!

Winterplace now joins Massanutten, Bryce, and Appalachian Ski Mountain as being the only resorts in the region that are 100% open.  Woohoo!  I feel like it’s even more impressive because they have 27 trails open, which is significantly more than the others in that list.  Those 27 trails puts them behind only Snowshoe for most runs open in the region.  Kudos to them.

Finally, you should head on over to the messageboard and check out some of the trip reports that have been posted lately.  We’ve got one from Cataloochee, Timberline, Snowshoe, and mine from Beech.  There’s lots of good pictures and even some videos in there.  If you haven’t already signed up, make sure to do so and join the conversation on there!  There’s lots of good info.