First Turns of the Season 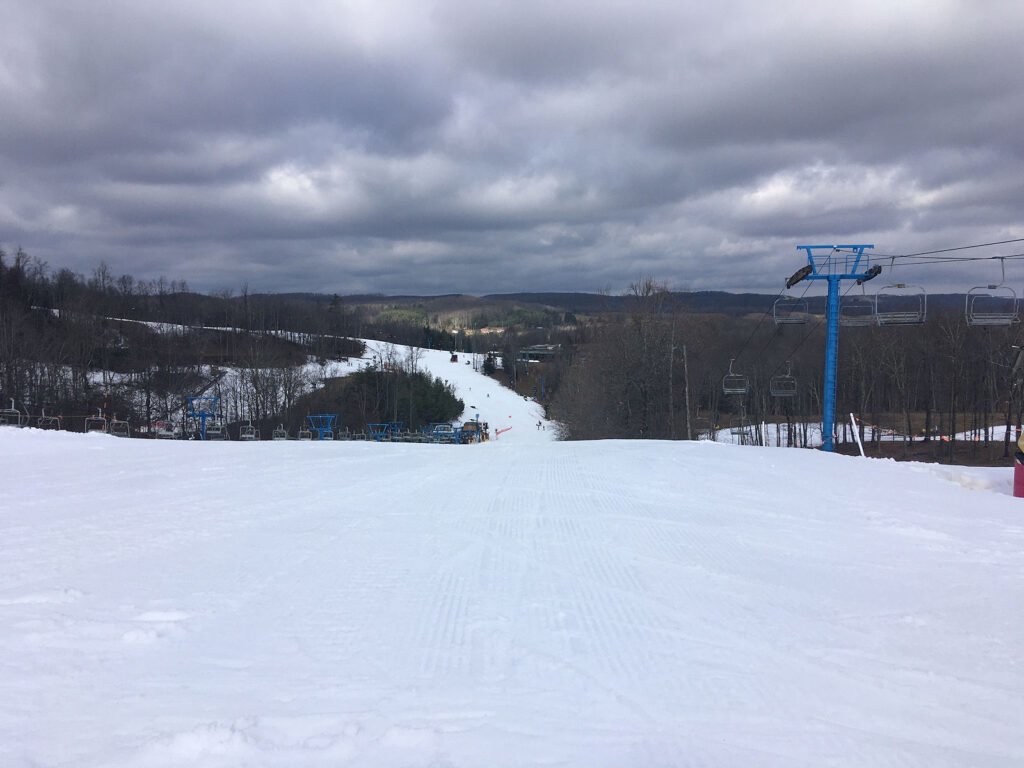 Story and Photos by Joe Stevens

I can honesty say I have been waiting for this day for over a year.  Due to a bad hip, which was replaced in February, I only had three days on the slopes last season.  Any of you that know me, understand that is like taking honey away from Winnie the Pooh. But today, Sunday, December 15, 2019, the wait is over and the 2019 – 2020 season’s first turns are in the books.

I have to admit there was a little bit of apprehension strapping on my snowboard and getting on the lift, wondering what it was going to feel like and if everything was going to come back to this old, one-planker.  Luckily (or maybe unfortunately) this was my second go around with heading out to the slopes with a new hip as I got my first one done in 2015.  As was the case before, after the first push off and first turn, it was all downhill from there (in a good way).

I have been associated with the ski industry in one form or another since 1985 and the only thing that ranks higher on my anticipation scale when it comes to sports is opening day for baseball. That’s probably because that came along earlier in my life, before I realized how much fun a person can have on snow.

As I scribe this week’s column, I am sitting in Winterplace Ski Resort’s cafeteria enjoying the sights and sounds of a ski resort for another season.  After about a dozen or so runs I made the decision to pack it in for the day and count my blessings for being able to make those first turns of the season.

I am also watching my son Christian and his two friends Brady and Ethan refuel and now head back to the slopes. I actually thought I was going to be asked, “Why isn’t this trail or that trail open” and thought I was going to have to tell them that each resort has to open for who will come first and that’s mostly beginners and intermediates. Nope, instead all three of them said to me, “The snow is really nice today for it being Winterplace’s second day of the season.” Well stop me in my tracks on that one and good for them realizing that a resort can’t open everything at one time.

As I look back to my 40 seasons in the industry, I can remember each and every opening day.  Something like a golfer being able to remember every shot, on every hole at every golf course they have ever played.  Considering that I worked at Snowshoe Mountain for 16 seasons and skied there before being employed at 4848 feet, that is where the majority of the first turns occurred.  But you can also toss in Massanutten and Wintergreen in Virginia, and of course Winterplace in West Virginia and Wisp in Maryland.

Over those years I don’t ever remember worrying about how many trails were open or how many lifts were operating, just that there was snow under my skis or snowboard.  When somebody complains about the lack of terrain available, I just shake my head as I know they probably have zero understanding of what it takes to make snow to get the first trails open in a season for them to have some fun. Those are the skiers and snowboarders that have no clue of the effort to get everything up and operating.

I just broke bread with Terry Pfeiffer, President of Winterplace and the West Virginia Ski Areas Association about his numbers for the resort’s opening weekend and he said to me, “It was just enough for us to find the mistakes and problems and take care of them with the holidays right around the corner.” Kind of a shake down cruise he told me and I fully understand that it is easier to handle a problem with a small crowd that having to deal with something when the resort is elbow to elbow.

Back to Those First Turns…

I really like it when a lift attendant looks at me a bit sideways as it’s not everyday a 62-year old snowboarder ventures up to get on the chairlift.  Then after about the sixth or so time they see me come through, they ask me if I am getting tired.  You know early in the season they probably have a pretty good point, but who the heck cares, because I cherish every second I can make turns on the white stuff.  I was a bit worried after my second hip replacement that my days were numbered on the slopes, but after my first turns of the season today, I can’t wait for my second day.

As I look around the southeast, it looks like every area will be using the upcoming cold weather to get the slopes ready for the Christmas holiday onslaught.  As I was getting off the lift after my last run of the day there was Pfeiffer working with a snowmaker positioning a snowgun that will commence operating as soon as the temperature allows. I am sure that is the case at all of the resorts in the region at this time.

I know for a fact that there will be a number of people heading north from all points south this holiday, and that will not only be their first turns of the season, but in many cases it will be the first time they have ever seen snow in their lives.  Believe me when I say, I have seen those looks and there is nothing better, It is actually very humbling as most of us in the industry take snow for granted.  But that’s another story for another time.

In the meantime, I’m back and can’t wait for day two.  Let gravity be YOUR friend…as it is mine.

That’s it for this week. Thanks for joining me for my weekly thought process. Just remember – whether it be cold or whether it be hot, we’ll weather the weather, whatever the weather will be.  Think about it! See you on the slopes.