The First Hump Day of the Season Brings Snowmaking Back Tonight 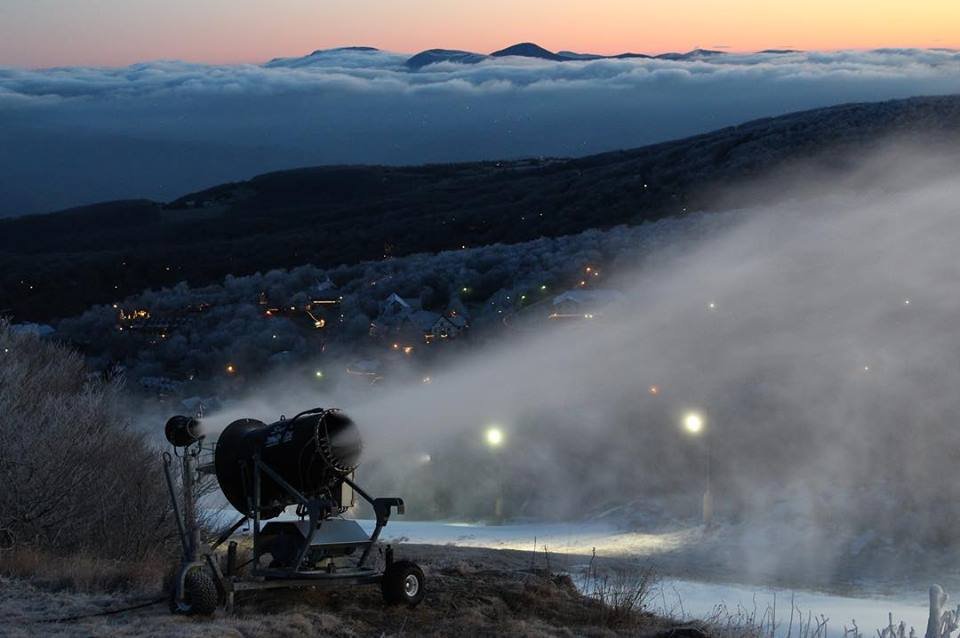 Only one more work day lies between us and the holiday weekend.  That means only one more day until we feast and pass out on the couch shortly thereafter.   For many of us, it also means only a day or two before we get to ski or snowboard for the first time this season.  So pumped!

The last 24 hours has been a little on the mild side.  There’s definitely been a noticeable deterioration of the snow at the resorts who are either already open or shooting to be open this week.  Thankfully, those five resorts who have an opening this week will be able to make snow once again beginning tonight.   Actually, Sugar Mountain had the “Snowmaking in Progress” sign up on their site this morning but I can’t actually see where on the mountain it’s taking place.  The webcam at the top is pretty blurry right now.  It’s 30 at the summit so I’m guessing the guns are going on Northridge and Switchback for the time being.

Everyone else is keeping the snow guns off until tonight when temps will dive back into the 20’s.  Brad Panovich sent us his latest forecast last night and he discusses the snowmaking opportunities through the end of the week.

Typical early season weather…some cold at night that allows for snowmaking with milder temps during the day.  I’ll take it.  There have been seasons in recent memory where we hardly had any slopes open at Thanksgiving due to REALLY warm temps, so I’m not going to complain too much.  The only thing I’m a little concerned about is the fact that Brad doesn’t think the North Carolina resorts will be able to make snow Thursday night due to inversions.  Such a dirty word that is.  The National Weather Service and a local High Country forecaster has temps for Sugar, Beech, and App dipping into the 20’s to around 30 degrees Thursday night.  So I won’t lie, I hope Brad is wrong!

We have our first night session of the year as Cataloochee announced this morning that they will begin night skiing tonight.  They’ll be open from 9am-10pm today, so maybe you can get some turns in after you get off work.

A Review of Who’s Opening in the Coming Days

I made a reference about the five resorts who are opening this week, and then I realized that some of you who don’t read this site on a daily basis might not know what those resorts are.  Let’s do a little recap then of openings in the next few days.

Open Right Now: Sugar Mountain and Cataloochee remain the only two open resorts in the region for the time being.  The trail count for both remains unchanged since yesterday.  Sugar is open on 5 trails with 2 lifts running while Cat is open on 3 trails with 2 lifts in operation.  Both will be open tomorrow for Turkey Day skiing and riding.

Opening Tomorrow (Hopefully): Appalachian Ski Mountain is still slated to open tomorrow for the season.  As they mentioned in their press release, a decision will be made first thing Thursday morning.  Snowmaking tonight should allow them to open up, but you’ll definitely want to check their site early in the morning if you plan on heading up there.  If they do indeed open, they’ll be skiing and snowboarding from 9am – 5pm and as an added bonus, the first 100 guests to the ticket window will get a free liftie.  Better get up early!

Opening Friday: Beech Mountain and Snowshoe are both anticipating a Friday opening.  I can’t imagine either one will miss that target.  I’m thinking Beech will have a few runs open, including Upper & Lower Shawneehaw, while Snowshoe will have several trails open on the Basin side.  I’m planning on being at Beech on Friday, so if you see me out there cruising down the mountain say hey!

Other than those 5 ski areas, it doesn’t look like we’re going to see any additional openings until next weekend at the earliest.  It’s still early in the season though and things really don’t get going until December anyways.  Just be thankful for what we will have!

Sad news came out of the Snowshoe camp yesterday as Dave Dekema passed away unexpectedly.  Admittedly, I only met Dave a few times but he was a very nice fella and was always a fan of Ski Southeast and extremely good to us over the past several years.  Mike wrote a nice piece in remembrance of him that I’ll link below and I’d imagine Joe Stevens will have some things to say as well in his weekly column on Sunday.

That is it for me for today and this week.  A short week to begin the season for me but I’m slowly getting back into things.  Mike will be with you all for the rest of the holiday weekend.  Happy Thanksgiving to all and I hope everyone can get out this weekend and enjoy the (manmade) snow!