A Fantastic Weekend…We Thaw Out This Week

What an amazing weekend it was.  I predicted on Friday that it might be the best weekend for skiing and snowboarding in the Southeast that we’ve had in at least two years and I think I ended up being correct.  A month of serious snowmaking combined with some excellent weather provided “pristine” conditions as Mike noted on yesterday’s report.  Saturday was a little on the cold side, but yesterday ended up being mighty fine as we warmed up a bit, a trend that will continue today.

I made it out to App Ski Mountain yesterday for the first time this season and my oh my were things good.  The snow had a nice crunchy sound when you walked on it, coverage was fantastic, all of the trails were open, and the terrain parks were firing.  It was an amazing day and I know I had a good time because my legs are sore this morning after hitting jumps all day.  I probably shouldn’t have done a bunch of squats and lunges on Friday afternoon knowing that I’d be riding park this weekend.  Woops.

Below are some images that I snapped.  Click on each to enlarge.  I might have some video later today or tomorrow once my friend sends it to me. 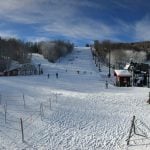 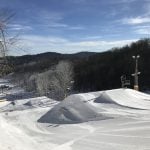 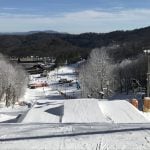 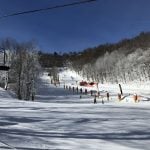 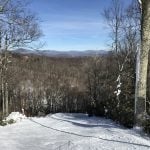 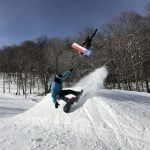 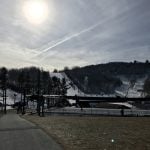 Here are some other pictures from the ski areas’ social media pages showing just how good things were.  Surprisingly, there weren’t more. 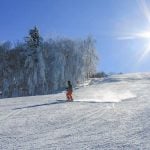 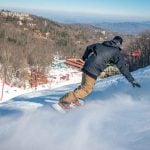 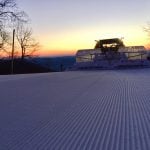 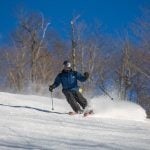 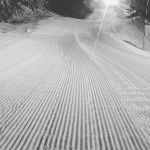 Finally, here is a little mini report from Meimei Ma who was at Massanutten this weekend.

I had a great time at Massanutten over the weekend. Temp range was 3-10 degrees Saturday. Much nicer on Sunday when it got into the 20s in the afternoon. Pretty empty on Sat and no real lines on Sun either. Bumps already on Paradice, Upper MakAttack, and a new set of beginner bumps on the side of Geronimo. There are park features on Nutten-to-It, which is where they were 10 years ago. 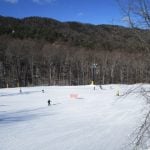 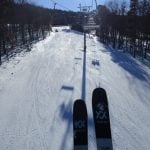 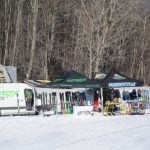 The recent cold snap we’ve been in since Christmas has come to an end.  It was inevitable.  Between that and the Panthers loss I’m in a down mood this morning (yes, it was intentional grounding).  Today is the warmest morning I’ve seen on the snow report since before Christmas.  What a few weeks it has been!  Don’t be fooled though, temperatures are still in the upper 20’s and 30’s at the ski areas, so while it may be milder than recent days it’s still chilly out there.

There is some nastiness ahead today though for many ski areas as a wintry mix moves into the region.  Freezing rain, snow, sleet, and rain are possible for the resorts in Virginia, North Carolina, and Tennessee.  The further north you go though and the chances of plain old snow increase.  The West Virginia ski areas and Wisp in Maryland have the best shot of seeing accumulations today.  The forecast for Snowshoe, Canaan, Timberline, and Wisp Resort is for 1-3″ of the white stuff today.  An interesting stat…this morning is the first time since December 23rd that Canaan and Timberline haven’t received any measurable snow in the previous 24 hours.  That’s rather impressive, even if the snow totals were on the light side during that stretch.

The all important MLK weekend is in our sights now.  It’s hard to believe we’re already at this point.  I consider it the midpoint of the season and it’s the second of the big three weekends of the season in terms of finances for the ski areas.  Thankfully, the snow itself will be in great condition for the holiday weekend.  The weather in the week leading up to it though definitely looks less than ideal.  We’re going to stay on the mild side this week and underdeveloped snow chances increase as the work week wears on.

Don’t fret too much though.  Arriving just in time for vacationers, a cold front will move through Saturday and bring with it the return of colder temperatures.  There are snow chances in the forecast for Saturday and the rest of the holiday weekend looks nice and chilly.  Overnight snowmaking just about each night this weekend will help refresh the slopes after the upcoming mild temps this week.  I’m sure some people are freaking out looking at the forecast for the week ahead, but it’s not going to be that bad.  We’ve seen way worse (cough last year cough) and we will see a return to stellar weather and snow conditions by the weekend.  It’s just a bump in the road that we should be accustomed to.  We’ve just been spoiled over the past two weeks with consistent bone chilling cold.

We’ll keep you updated all week so keep checking back!  And don’t let the forecast deter you from making plans this weekend!