An Extremely Warm and Rainy Hump Day, Cold is On The Way Though! 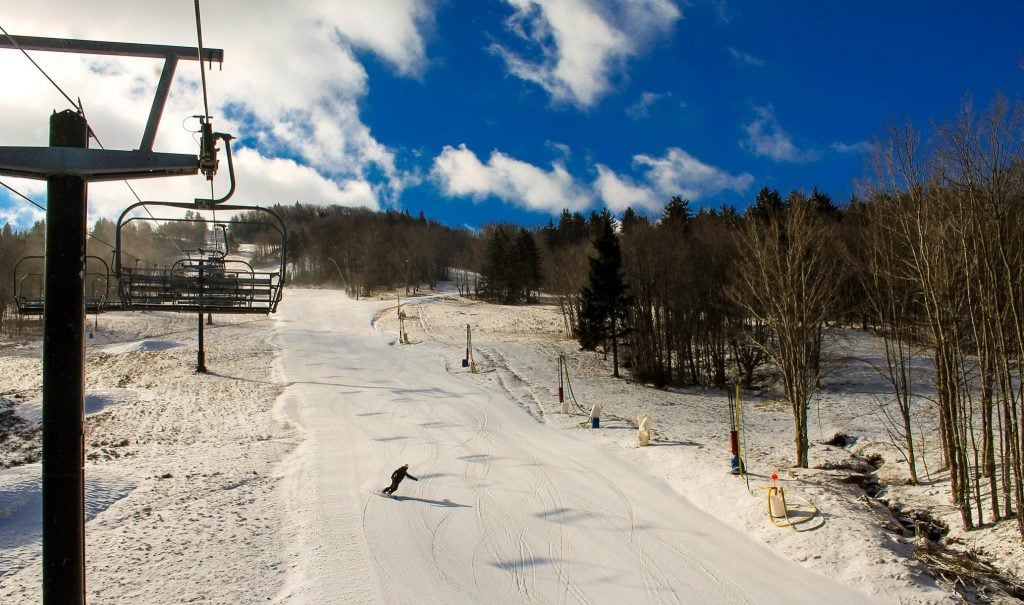 Another day, more warmth to talk about.  Temperatures this morning are already warmer than average highs for this time of year.  Underdeveloped snow and thunderstorms are expected later today but the good news is that colder air follows them and moves in tonight and tomorrow.  We even have a little bit of snow in the forecast for portions of West Virginia over the next couple of days.

Today is the final day of the most recent thaw.  And it’s going to be a doozy.  Temperatures right now are already in the 50’s for many of the resorts and will get into the 60’s for several of them.  Add to that the fact that a line of storms are making their way into the region and today is shaping up to be quite a bummer.  Some rain has already showed it’s ugly face in the Canaan Valley area as David Lesher is reporting 0.63″ of the wet stuff in the past 24 hours.

I might be embellishing how bad today’s weather is going to be.  Don’t get me wrong the storms are going to be strong later on, but this morning might not be a terrible time to get out and ski or snowboard.  The snow will be super soft and mushy, but it looks like a nice morning based on some of the webcam views.  Case in point, hardly a cloud in sight on the Sugar Mountain base cam. 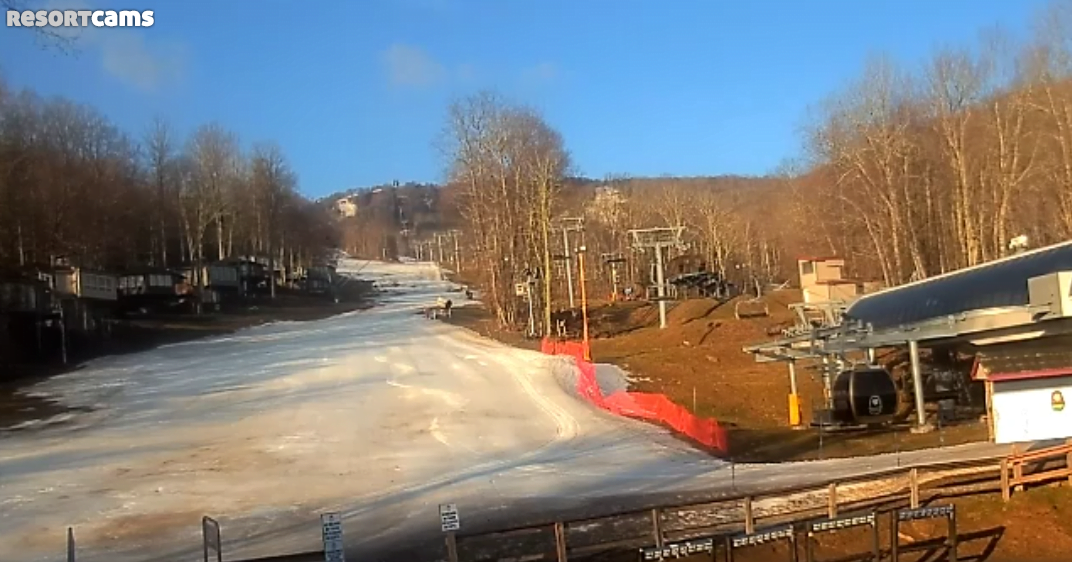 A couple of resorts are already preparing for the expected severe weather later on though.  Massanutten is actually closed today and tomorrow, reopening on Friday (hopefully).  Things are looking a little thin and narrow out there so I’m sure that also played into the decision.  Snowmaking temperatures MIGHT return on Thursday night for them so cross your fingers they can fire the guns back up.  Temps look borderline as of right now with a low of 31.  They should definitely be fine by Saturday though as it will dip into the low 20’s Friday night.

Appalachian Ski Mountain will close at 6pm today due to the impending weather, so if you were planning on a night session up there, think again.  I have a feeling many other resorts will do the same and cancel their night sessions as well.

We’ve been looking forward to it since the weekend, and it’s finally almost here.  The return of colder weather that is.  And just in time.  Things are looking a little rough on the webcams this morning as I’m seeing brown spots just about everywhere.  No bueno.  It was also weird to be going through the social media stuff this morning and see that Canaan Valley Resort opened their golf course already.  They usually have a foot or two of snow on the ground at this point.

Here is the latest forecast from Brad Panovich as he looks at the upcoming cold for the weekend.  There’s even a little bit of snow for our Snowshoe Summit!

Some cold and a little bit of snow is just what the doctor ordered.  Some resorts MIGHT be able to fire up the snow guns tonight.  I’ll be arriving at Snowshoe sometime around 1am probably and I’m hoping to hear the roar of them when I get there.  I’m thinking it won’t be quite freezing yet though at that point as the NWS hourly forecast graph shows the mercury not hitting 32 until sometime around 2 or 3am.

For those folks who will be arriving on Friday for the Summit, it looks like you all will be treated to a couple inches of natural snow.  Stoked!  A few inches of snow combined with snowmaking will undoubtedly get the mountain in great shape for our weekend fun.

Outside of Snowshoe and West Virginia, it doesn’t look like any natural snow but a few nights of snowmaking will arrive just in time for the weekend.  It looks like Beech Mountain and Sugar Mountain will be able to keep the guns on all day on Friday.  Everyone else should be able to make snow on Thursday, Friday, and maybe even Saturday night.  Combine that with the fact that sunshine is in the forecast for Saturday and Sunday and we have one decent looking March weekend of skiing and snowboarding!

A Look Back at February

The calendar has now switched over to March, which means that today is the first day of meteorological spring.  I’m having deja vu typing that because I feel like I was just talking about meteorological winter.  That was three months ago.  Time flies!  Anyways, I wanted to take a look back at temperatures were in February.  We all know the weather stunk, but let’s just see how it ranks in the context of other years.

Like January, it was a warm one.  Really warm actually.  As I did last month, I’m going to take a look at three different stations, those being Banner Elk, NC, Beech Mountain, and Snowshoe.  Records for the Beech Mountain station only go back to 1991, so I added in Banner Elk because it’s close in proximity and records go back to 1907 for it.  Also, you could even consider the Banner Elk station to be somewhat comparable for Sugar as it’s only a couple hundred feet different in elevation.  Snowshoe’s records go back to 1975.  The table showing the numbers is below.  The average temperature rankings are below it.  You can click on each image to enlarge. 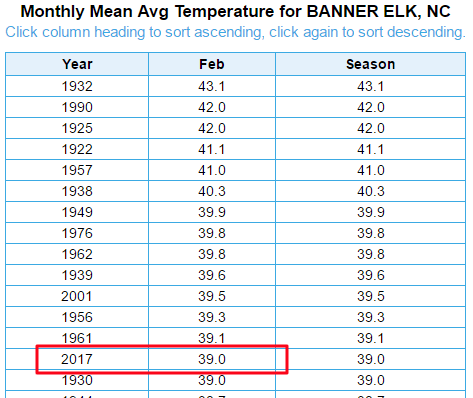 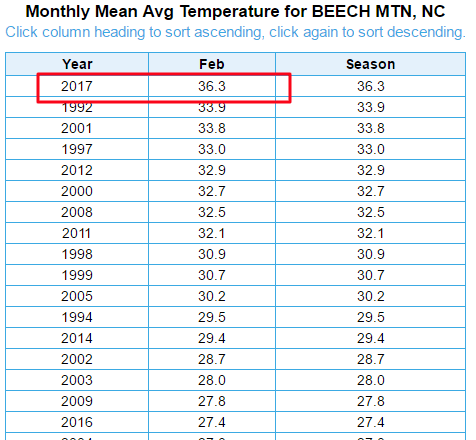 Warmest February for Beech at least since 1991. 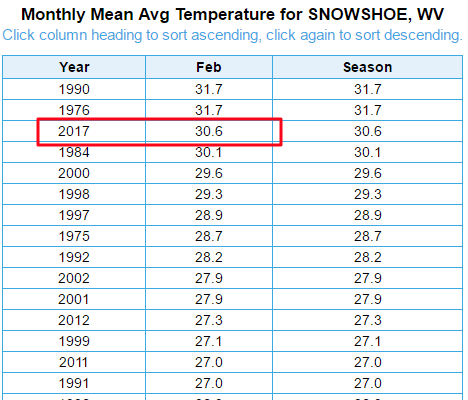 3rd warmest February for Snowshoe since 1975.

As expected, the numbers show that February stunk.  The average temperature for Beech was the warmest since the station began recording in 1991.  It was also wayyyy above average and exceeded the next previous high year by almost 2.5 degrees.  In fact, the average temp for this past February at Beech was warmer than what it normally is in March.  Oof.  Finally, 16 days of minimum temps being below freezing (snowmaking) was 4 less than the previous low.

It was much of the same for Snowshoe, albeit not quite as bad.  This February was the third warmest since 1975 for them.  The average temperature up there was also right at what it normally is in March, only 0.2 degrees cooler.  And finally, they tied their fewest days of sub freezing temperatures for the month.

So yeah, February was as bad as we thought.  Let’s hope for a miracle March!

Next week I’ll take a look at the winter as a whole.  I was going to do it today, but I’ll save it for next week when I’m struggling to find something to write about.

That’s it for today.  Tune in tomorrow as I’m going to try and do a live broadcast from Snowshoe.  I’ll be staying slopeside so hopefully I have some snowmaking to show!