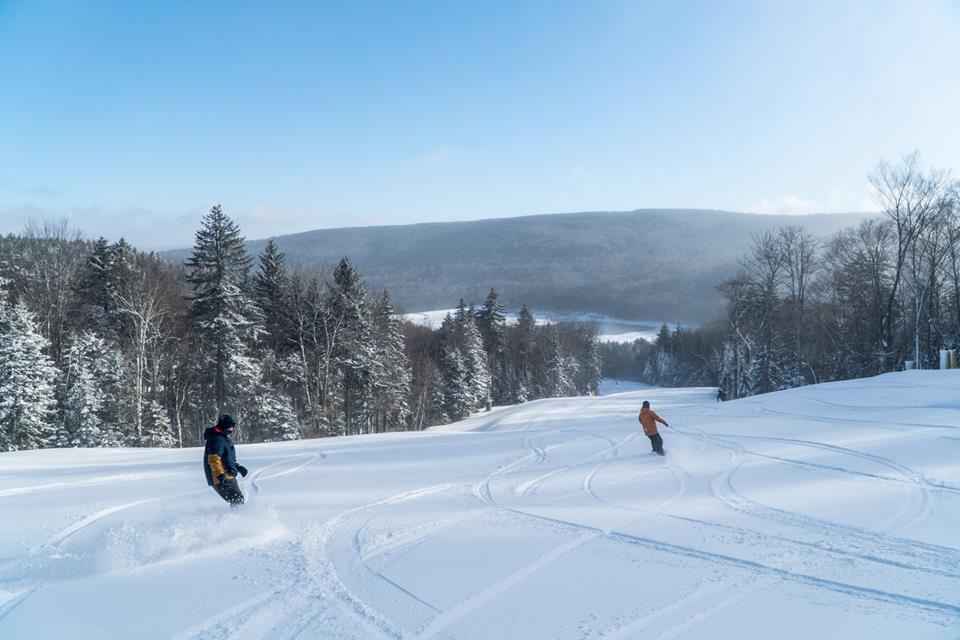 About two weeks ago I posted and talked about how I was beginning to sound like a broken record.  It was warm and we were waiting on a big cold snap.  That was the message for a week or so straight  Well, I feel like a broken record again today but for a completely different reason.  The past 24 hours has seen a little bit of snow, more cold, and additional snowmaking.  The seems to be the theme of the past week plus now!

Don’t let the fact that it’s 15-20 degrees warmer this morning fool you, it’s still a chilly start to the day.  Yesterday was just so brutally cold and windy that temps in the 20’s and 30’s at the ski areas seems balmy.  Once again, a vast majority of the resorts made snow yesterday and/or overnight.  The bases are really starting to get up there!  We’ve gone from having no snow on the slopes to 2-4 feet in the span of 7 or 8 days now.  I was just looking at the Pinnacle Inn cam atop Beech Mountain and the sides of Upper Shawneehaw have a fairly large dropoff.  That means tons of side hits for me to play on Saturday when I’m up there.

On a related note, I’ll be doing an Instagram takeover for Beech on Saturday.  Make sure to follow them as I’ll be posting my adventures thoughout the day on their Instagram story.

As expected, we also have a little bit of natural snow to talk about again this morning.  And as expected, it was confined to the West Virginia resorts and in Maryland.  A quick glance at the snow report and you’ll see that Winterplace is reporting a trace, Snowshoe is reporting an inch, Canaan and Timberline saw 3.2″, and Wisp received 2″ of snow in the past 24 hours.  Including yesterday’s reports, that puts Canaan and Timberline at 8.8″ of new snow in the past 48 hours and Wisp at 5″.  All three of those ski areas open for the season tomorrow.  Winterplace opens tomorrow as well, and while they only saw a trace in the past 24 hours, don’t forget that they were reporting 4″ yesterday morning.

The Shoe has seen 7″ of new snow in the past 48 hours and conditions look fantastic up there.  The featured image at the top of this post was snapped out there yesterday and they also posted the below video.  Only 12 days until I’m up there!

In a surprising move, Wintergreen has decided to offer folks a sneak peek of the mountain today.  They were originally scheduled to open tomorrow, but they announced yesterday that they will be open from 12-4pm today and lift tickets will only be $29.  They have 7 slopes open and 3 lifts.  That is a very cool move by them, I just wish they had advertised it a little more.  It’s nowhere on their website and I didn’t even know about it until I saw it on Facebook this morning.

With them opening today, we now have 7 ski areas open in the region.  That number will jump up to 13 tomorrow, and then 15 on Saturday when Bryce and Sapphire Valley opens.  For a full rundown of all of those openings, go back and read my post from yesterday.

We’ll have a few more days of cold and snowmaking before, inevitably, a warm up begins to take place late this weekend and next week.  I’ll let Brad discuss more in his latest video forecast.

All good things must come to an end, and so too shall this extended cold snap.  The good news is that next week’s mild up doesn’t look ridiculously warm.  Also, by the time the warmer weather does arrive we’ll have had 10+ days of snowmaking so I’m not too worried about conditions for the holiday time frame.

As for that change back to a cold pattern around Christmas or shortly thereafter, we’ll have to keep an eye on things.  We’re still 11 days from then and things will certainly change in the forecasts.  I know the GFS model has been doing it’s usual flip flopping in the long range.  Model watching is stressful as a snow lover.

We’ll focus on that warm up next week, but it should give you extra incentive to get out this weekend before it arrives.  It’s going to be an especially fun Saturday and early Sunday.  I actually rescheduled a family event and moved it to Sunday just so I could go riding on Saturday.  You gotta do what you gotta do.

Check back tomorrow as we’ll get you ready for the weekend!

Previous Post
Ski Southeast Forecast for 12/13/2017: Still cold for now but a warm-up is on the way.
Next Post
The Vast Majority of Southeastern Ski Areas Are Now Open