Into Every Life a Little Rain… 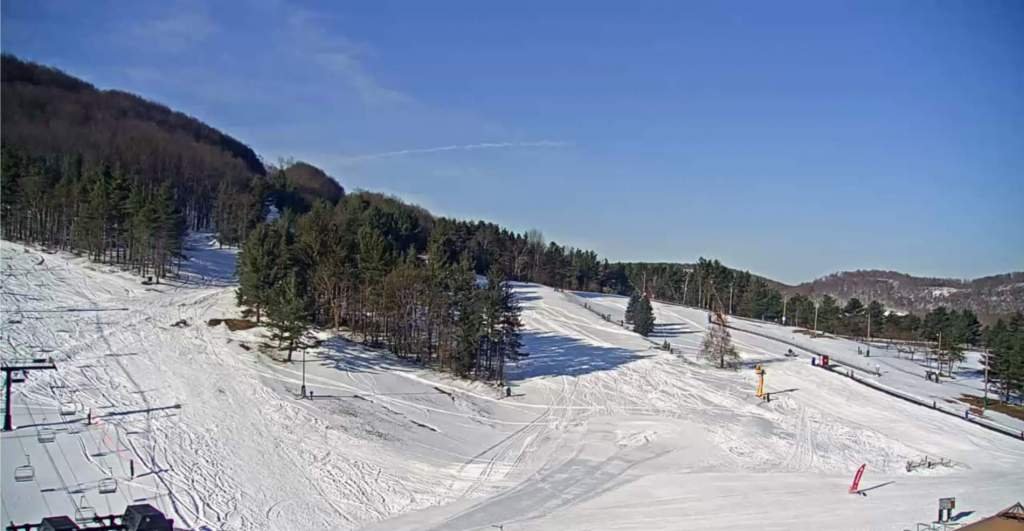 Wait, no – it doesn’t! Not this much anyway. We’ve had a little more than our fair share of rain over the last month. I guess the good news is that the rain looks to be of the LIGHT variety and it also appears that it will be holding off until later in the day and then change over to SNOW.

The photo at the top of this page is of Wisp Resort this morning and as you can see, they’ve had quite a lot of snow lately.

Depending on which weather forecast you look at Snowshoe and the ski areas into West Virginia, Virginia and Maryland could see 4-6″ or snow or 6-8″ or a foot. Most forecasters are predicting 3-4″ of snow for Banner Elk and Sugar Mountain, while some are forecasting 4-6″ and we’re seeing chances for up to 8″ of snow for the High Country.

The super storm, “Blizzard of 1993″ has a 25 year anniversary coming up tomorrow. This storm will be nothing like that, but it bares mentioning. Man it is really hard to believe that event happened 25 years ago. I remember it like it happened maybe 8 or so years ago. I was living up on Seven Devils and we had 44” of snow over four days and drifts were 8-10 feet deep everywhere. That snow was still deep and hanging around weeks later.

We didn’t give names to snowstorms back then – and most of us wish they didn’t now – but the 1993 storm was labeled as “THE Storm of the Century”. It clobbered one of the largest areas ever recorded with snow. It affected more than 100 million people of the eastern U.S. over a four-day period from March 12-15, 1993. Even areas as far away as Cuba and Canada were affected by the massive storm. 26 states got in on that snowstorm.

While the nor’easters of 2018 can’t really compare to the impact the 1993 Superstorm had, this silver anniversary offers a chance to reminisce.

Of course, we’ll be updating you guys as this storm materializes. It appears most resort communities will see a light rain to snow transition later today and tonight. The heavenly-hosted snowmaking equipment (ran by God) looks to be kicking in Monday morning and by Tuesday some significant snowfall should be reported at most ski areas. Of course look for Sugar to add 30-50% to it.

There is already a WINTER STORM WARNING out for the Mountains of Western North Carolina for tonight and tomorrow…so 25 years later it looks like we’ll get some nice snows.

A strong upper level disturbance combined with a strengthening area of surface low pressure will bring increasing moisture to the area today. As colder air begins filtering into the mountains tonight, rain may mix with sleet before changing over to snow.

Snow is expected to accumulate across mainly the higher elevations of the North Carolina mountains, with the highest amounts in the northern mountains.

Did You Remember to Set Your Clocks Back?

These days it is a LOT harder to miss this annual “Spring Forward” shindig. Mobile devices automatically do the work for us in terms of waking us up on time, so it’s a lot rarer to miss this biannual event. We’re always advising visitors to the ski resorts to hit up the slopes AT 9am because you can get in about two hours of less crowded slopes on the weekends. Today, sleepy heads will be delayed a bit more…so this particular Sunday morning could be a little less crowded than others.

The clocks sprang forward at 1 a.m. local time on Sunday, robbing most states of an hour of sweet, sweet sleep in exchange for an extra hour of daylight during this time of year. Florida’s Senate passed a new “Sunshine Protection Act” which would make daylight savings time “permanently ON” in that state. That will be weird having to change your watch and phone, etc. when traveling down I-95 to the Sunshine State. Imagine all those Georgia/Florida football games where fans miss an hour of the game for failure to know that new law.

A Glance Around the Area…

It’s 36° at Appalachian Ski Mountain this morning and 23° at Bryce Resort. It’s crazy how often that’s happened this season – particularly since February 2nd. Normally it is ALWAYS colder in the North Carolina mountains than it is in the Virginia resort towns. Not this winter. Cataloochee is reporting 41° while Wisp, Snowshoe and other resorts into West Virginia and Maryland are reporting 18° to 23°.

Speaking of Virginia…Bryce Resort celebrated their Winterfest activities yesterday. Those included their annual pond skim. Check it out:

Snowshoe Mountain is boasting 51 trails open today. They posted, “Pleasant temperatures should make for a really fun day out on the mountain. Snow showers are expected to move in overnight so there is definitely a good chance for a powder day and some free refills tomorrow. Our Ballhooter Spring Break Festival continues today – check out This Week on the Mountain for the full schedule of events. The Snowshoe Ski Team will be training on Widowmaker until 11:00AM. Only 5 days left to grab your 2018/19 Ridiculous Pass for just $229! Buy it now and you’ll be set for next season, AND the rest of this one!”

Sugar Mountain Resort’s 11th annual Easter Egg Hunt is today! Join Sugar Bear and Sweetie Bear at 8:45 a.m. on the Lower Flying Mile in search of prize filled eggs. One usually has a season’s pass it in.

Wintergreen Resort is still blasting away with snowmaking. They are open with 9 trails today.

That will do it for me today.

Previous Post
Some Resorts Stopped Cold Turkey, While Others Play On With Natural Snow and Great Conditions!
Next Post
Hanging In There