So The Entire Region Saw a Little Natural Snow and a Return to Snowmaking Temps and We Failed to Talk About it…ouch! 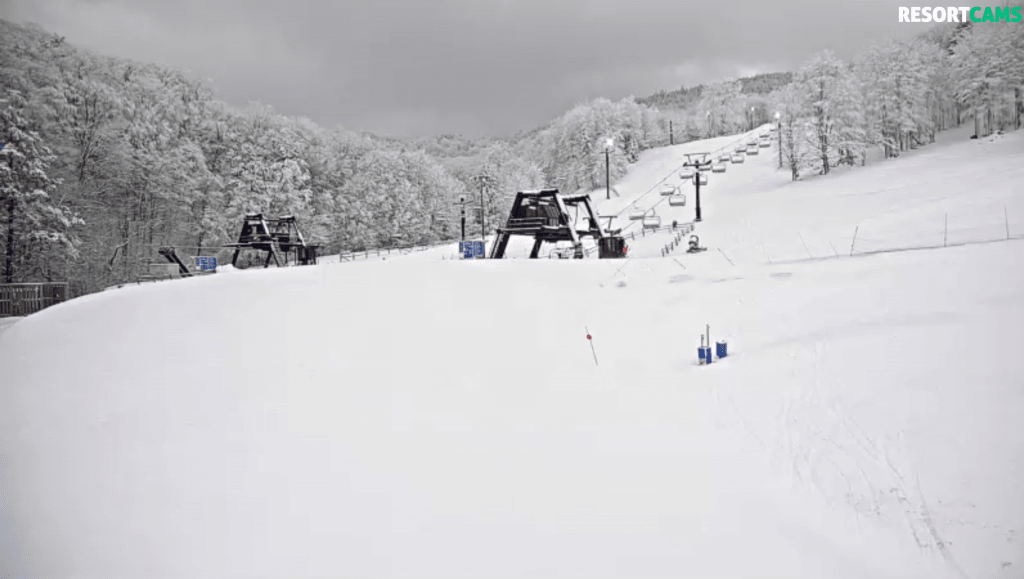 I can’t say that it has never happened in our 22+ years of covering the region’s ski areas…but the last time was about six years ago when we had a complete website outage…back when those kinds of things happened on rare occasions. However, we can’t make that excuse this time around. This time around I suppose Rudy figured if he was hanging out at Snowshoe for another day, he could miss out on keeping you guys informed. He’s a newbie, so we’ll forgive him this once. However, when it comes to Snow News…our office is wherever we can plug up the laptop or even via cell phone connectivity.

Again, we’ll forgive him this once. I arrived home after a long day at the office and pulled up MY skiMail inbox to [email protected] and OH BOY were you guys having my back and sending inquiries as to:

Were we done for the season, now that we wrenched out all of the fun that we could have from the Summit Weekend?

A few people were providing their own snow totals…”because we missed it”.

You GO guys and gals!

So I was jealous of Kenny Griffin and Rudy Ryback who got to stay over at Snowshoe Mountain for another day of fun…and somehow our wires got crossed and/or Rudy assumed…and you know how that ends up!

However, HERE I am…at 6:30pm, updating you guys JUST so I can brag that we’ve not missed a day in HOWEVER many days it has been since that DOS attack. I vaguely remember Kenny sharing that we had experienced something CRAZY like a million attempts in an hour or something to get to the website…which definitely would have (and did) shut us down back in those days.

Here’s what we know in terms of NATURAL SNOWFALL…

Appalachian, Beech Mountain, Cataloochee, Massanutten, Ober, Sugar, Wintergreen and Winterplace ALL saw from one-half to an inch of natural snow over the past 24 hours as of this morning AND there have been some pockets of continued snow all day, without much additional accummulation. However, the snow DEFINITELY “prettied” things up.

Snowshoe Mountain was predicted to see 6-8″ or more on Sunday into today, but the storm under-produced there…and yet they STILL saw 3″ officially at Snowshoe. As of 7pm it (is/was) still snowing…again not much in the way of additional accumulation – but pretty.

The BIG WINNER from this storm has been Canaan Valley and Wisp Resort with 5″ AND an unconfirmed report from Bill Nabers up at Bryce of 6″ although that COULD have been an emailed typo…because I’m not seeing anything official from up there. Bryce themselves are not reporting ANY snowfall…and I know THAT is wrong as well.

Really SNOWMAKING is more important than natural snow at this stage, and MAN there is a lot of that happening today and this evening. Bryce has reportedly changed their minds and now they WILL make snow each evening this week as temps allow AND Appalachian Ski Mountain, Beech Mountain Resort, Cataloochee Ski Area, Massanutten Resort, Ober Gatlinburg, Snowshoe Mountain Resort, Wintergreen Resort, Winterplace Resort AND Wisp Resort are ALL making a BLIZZARD on their respective mountains AS WE SPEAK.

So my fellow snow-loving friends, ski and snowboarding conditions will be in MID-JANUARY-MID-SEASON form tomorrow and for the next several days.

Sunday, March 3, at 13:30. Snowing at Bryce Resort from about 10:30 and still going. About 2″ wet snow in my yard and just starting to cover the back roads due to marginal temps. (about 32 here). Main roads still good good. Will update you later.

Good news, in a positive change of plans; Bryce will make snow on Monday, Tuesday and Wednesday nights. Touch up, tubing and then stockpiling as priorities. Bootlegger slope will be the targeted slope to extend the season. Will keep you posted on how those efforts work out. It looks like Bryce is going to push the season as late into March as snow and people allow.

Looks like the snow has ended. About 6″ total (about an inch mixed with sleet) on the slopes with 3.5″ in my backyard. Snowmaking mon-wed nights. It should be good skiing on Monday. i’m working patrol so i’ll let you know.

MASSANUTTEN
1″ new snow yesterday, clearing with highs in the lower 30s. We will be making snow this week to give you the best possible conditions through the end of the season. The current plan is to operate daily through at least Mar 17. Check out our late season pass deals and operating hours below.

SOME NICE PHOTOS THIS EVENING…

A COUPLE OF VIDEO SHARES…

I have a GREAT video to share of Saturday’s Boathouse fun and I will get that compiled ASAP. For now…check out these two.