WHEN IS ENOUGH, ENOUGH 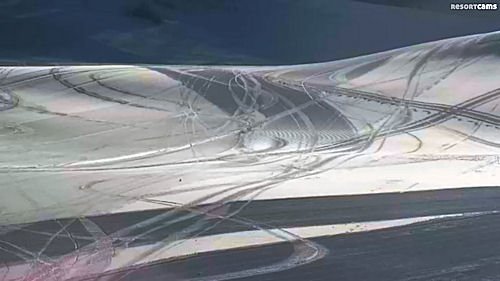 It’s time to rehash some thoughts from seasons gone by as I think it’s time to remind folks that it’s not how deep the snow is, but what’s the quality of it at the top and does it extend from tree line to tree line. In some recent First Trax posts by Mike and Kenny they both have made some references to base depths strongly raising, even though the amount of natural snowfall is below average this season and the amount of snowmaking, though strong when active, hasn’t been occurring as much as the last couple of seasons.

After reading those early morning columns it got me thinking as I have in the past just wondering how much snow does a skier and snowboarder really need under their equipment. At a gathering at Snowshoe a couple of weeks ago, Mike and I both laughed at a comment I made a couple of years ago that still holds true today, skiers and snowboarders are only using the top two to four inches of snow anyway. So do you think they are making their choices of what resort to visit by looking at the base depth numbers. Well I don’t think so, actually I think most folks these days are looking at how many true trails are available to have fun on while skiing and snowboarding.

So thinking along those lines, here’s to the resorts out there that are worried about getting more trails open and spreading out all of the folks on the slopes. This is the time of the season that for the most part all of the resorts are 100 percent open or at least 90 percent. Looking at Sunday’s snow report the smaller areas are completely open while the larger areas have a bit more work to do. But that being said, those larger resorts have done a very good job in opening terrain as quick as possible, instead of piling it on already open terrain. That means during holiday periods like MLK and President’s Weekend, skiers and snowboarders are not ski tip to snowboard edge to each other. Also it looks like all of the resorts have their terrain parks and snowtubing hills open which again helps spread folks out even more.

But let’s get back to my snow reporting point, I along with Mike notice that resorts started stating that the trails had received new snow over night when in fact nothing had fallen from the heavens but was produce by the snow manufacturing plants that every resort in the region has. Don’t get me wrong, I will never go back on the thought process that the best snowmakers in the country are right here in the southeast from Tennessee to Maryland. But new snow, like Mike perfectly stated comes from the clouds not from out of the barrels of the snow guns. Well I don’t know if it was a coincidence or not but after it was brought to everyone’s attention on First Trax, the practice was discontinued, at least for the time being. But the point is people are not going to go for the change in reporting structure just because a resort says so. And while we are on subject of reporting structures and base depths are an average and an average is one number, not the two numbers. Some resorts are reporting one number but the old fashion way continues for others.

I guess the moral of this column (story) is with the available technology out there these days and skiers and snowboarders texting and posting pictures of what they are seeing and experiencing, why try paddling up stream with changing snow reporting procedures just for marketing purposes. Remember every resort now has at least one on the slope live cam for everyone to see how the conditions are at any given time. Maybe not in the middle of the night, but most of the time. With that thought in mind, why even worry about a base depth when again skiers and snowboarders are only using the top four inches or so to play on? You will never ever convince me otherwise when it comes to that matter. Why mess with a good thing and just tell and show your visitors what you have waiting for them and they will come. This is not the time to try and reinvent the wheel, lay it out there in a way everyone can understand and appreciate and everything will be fine. Again this is a case in which every skier and snowboarder needs to thank Mike and Kenny for bringing these snow reporting matters to the surface, because as in the past they are keeping the resorts on their toes. Way to go boys!