Dust On Crust At An Affordable Rate

Hello skiers and riders of the Southeast!

Ah yes!  Winter is not quite ready to call it quits.  By now you should be aware that this past storm was a brief reversal of the premature spring-like setting that had engulfed our entire region.  For multiple weeks our slopes faced high temperatures, inches of rain, and brownish snow cover that beckon some of the rarer skier vocabulary terms such as smud and snirt.  Let’s just say that the snow has taken on an earthlier brownish color with a softer and lumpier feel.  Mashed potatoes come to mind.

Springtime skiing and riding is ideal for lighter layers, slushier slopes, and a push to pursue the passion just a little bit more.  Easier said than done though for all of us on the east coast lately.

While our counterparts up north have benefitted from additional dumps and prime positioning within the arctic dips from time to time, nobody has been spared completely. The ski areas can only sustain so much physically, but it is the mental side that takes an even larger strike, especially when the sense that things are winding down around here quickly creeps in.

Then the weekend hit…  and it hit with frigid force of flurries! 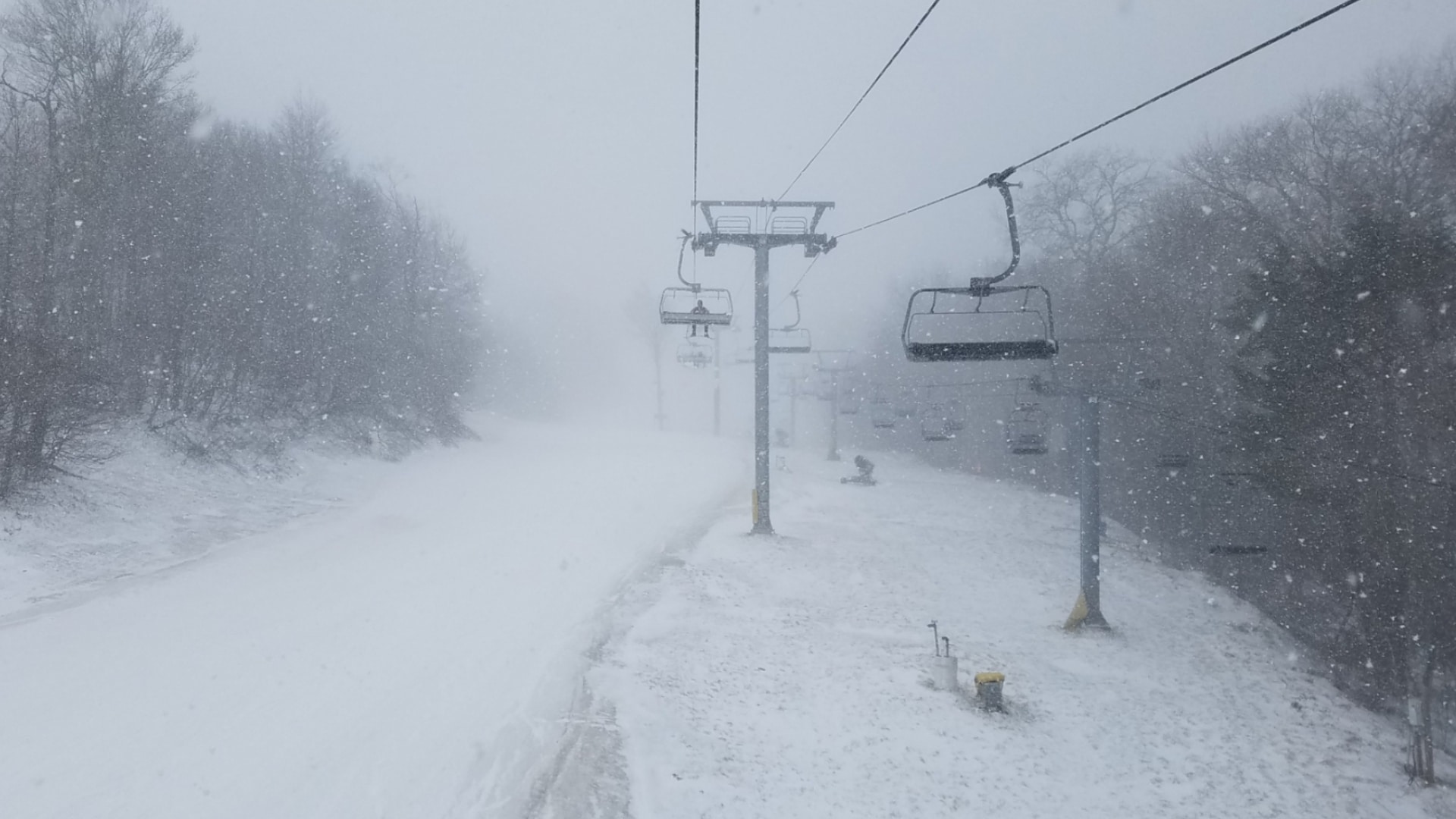 Mother nature brought snow to places very southwest such as Texas, Louisiana, and Mississippi, but it was the remarkable size of this system that stretched all the way north to the Saint Lawrence River in the province of Quebec which is worth noting.  Online observations showed that practically every open ski area got a piece of the action alongside the opportunity to pile on even more.  Happily, most of them have seized that chance to go for it. Some locals have even said that this event saved their season.

While that is fantastic news, it is appropriate for us to tip our beanies to those of you that were brave enough to bundle up and be there as winter dropped in again, and to acknowledge that you were greeted with a gift of fortitude amongst a new set of challenges.  The circumstances were some of the most defiant that anybody can find on a snow-covered mountain, and that was just a portion of the contest.  It was a test for your body, your clothing, and your mentality.  Saturday skiers and riders in particular had to contend with sub-freezing temps, high winds, variable visibilities, and the always difficult to navigate upon “dust on crust” underfoot.

For those that are unfamiliar, that term is used to describe conditions that have a very thin veil of snow on top of a hard packed and icy layer. In Sugar Mountain’s case, as was probably that of every other place within the region, the underside was solidified overnight and unwilling to budge by the time the lifts started spinning in the morning.  Even the corduroy formed from the snowcats had hardened up and were very difficult to slice with an edge.  Needless to say, a lift ticket here meant that you were in for an ankle and calf exercise with a side scoop of upper leg burner.  At least their March Madness discounted rates were in effect for the remainder of the season and are readily waiting for you to take advantage of now. 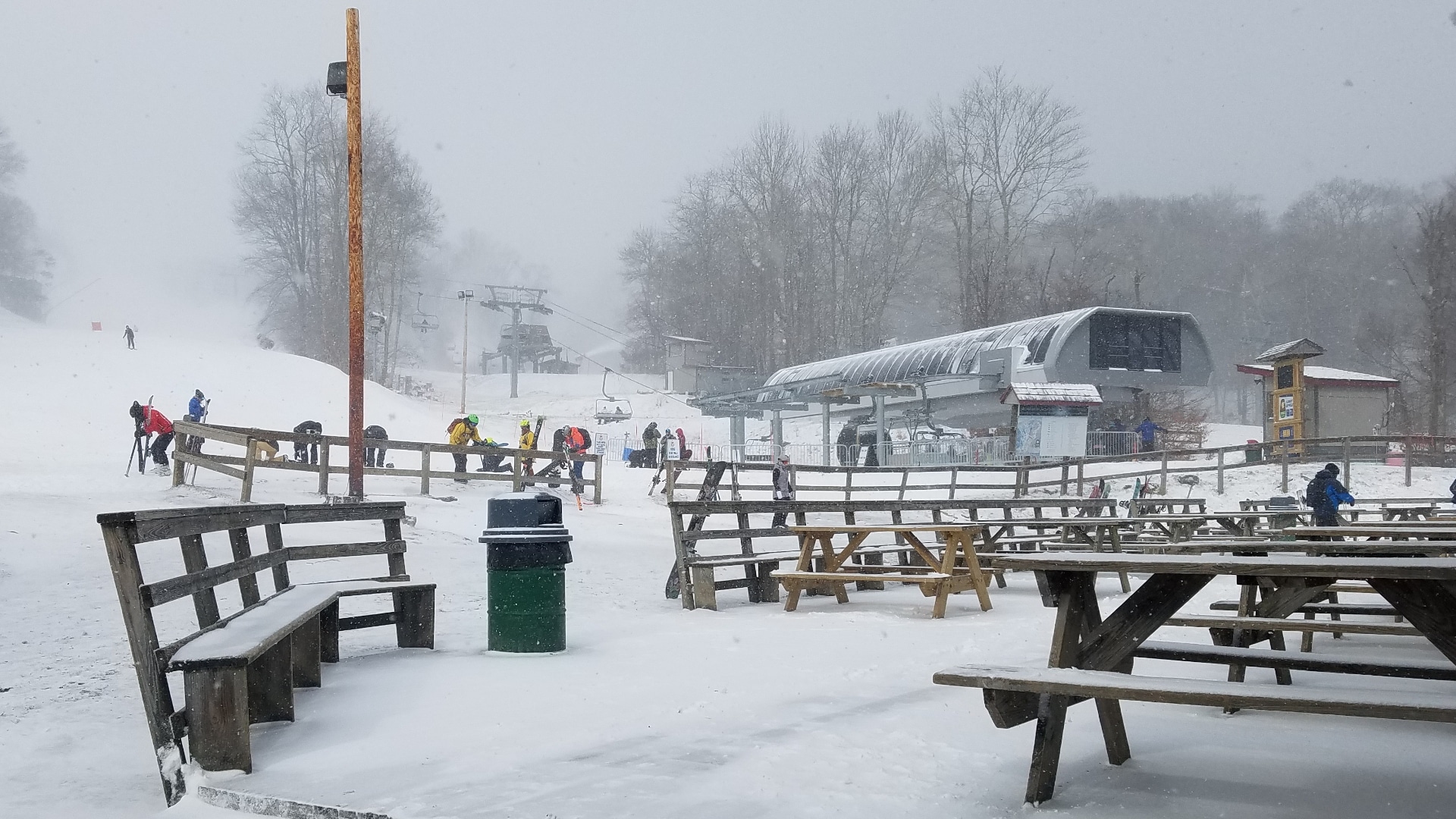 Saving in the pocketbooks is a bonus, but it should be known that the cost of this unique kind of experience yielded a demand for near perfection in order to not crash. That top shelf sheet of ice was most visible on the upper half of the resort, and it was generally situated on flatter pitches where additional loose snow was not piling up as quickly as.  Give credit to the wind which blew all that natural and manmade fluff around with incredibly powerful gusts.  Individual snowflakes meeting that slick and smooth surface generally yields little to no accumulation.  Fortunately, there were naturally built pockets on the steeper faces that acted like baseball gloves catching a fair amount of the powder as it blew in.  This took some time to garnish the desired effect, but after lunchtime these factors provided some pretty nice spots to lay down untouched tracks.

The morning laps were arctic in design, but not to worry, as the best spots to crave it up in those hours were on Northridge trail before you must choose your route on either Gunter’s Way or Switchback.  Same story could be said towards the bottom half of Sugar on their Big Birch and Lower Flying Mile runs.  The man made product assured enough relief from tragedy for sure, but it should be noted that the snow guns lining Switchback seem to operate at higher decibel noise than almost anywhere else.  Those guns in return provide a lot of white gold, but please do not mind the whiteout that comes when nature adds extra sprinkles in the mix. 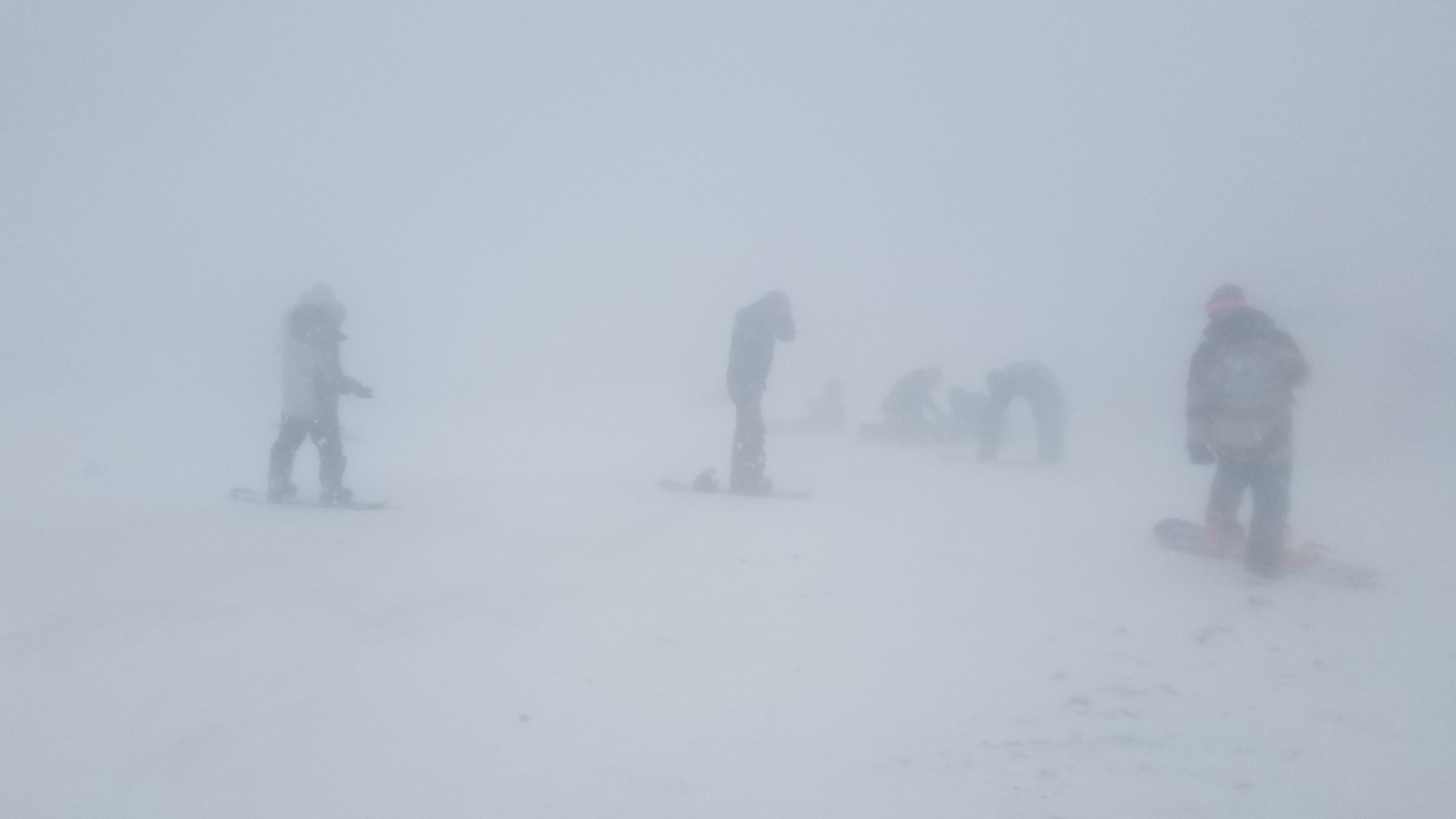 The always popular Gunther’s Way was a paradox at first, because multiple people took one glance at it and said “Nope” out loud while their body language said “Maybe” instead.  This is due in part to the appearance on the run itself with its staggered plateau like pitch of flat, steep, flat, steep repeats.  As mentioned before, the hard pack and ice was more prevalent on the horizontal spots, but the vertical moments contained the honey pots, especially as time crept along.  Around 2 PM on the far-left side there was untouched powder that was roughly mid to upper boot deep. Woo-hoo!

Same could be said for Tom Terrific once you got past the initial hockey rink that formed below the lift near the “Experts Only” sign.  That sight was intimidating at first, but honestly it was short lived and not as dangerous physically as the mental image painted it to be.  I lapped this run multiple times and towards the end of the day others joined in to get a piece of it.  One example was a snowboarder named Amber that overcame initial concerns from others within her ski party and instead rejoiced in fulfillment of joy once completed.  Perhaps you have been in a similar situation where roadblocks pop up, but your determination plows through it anyways.  Hearing that sound of triumph is worth the price of admission. 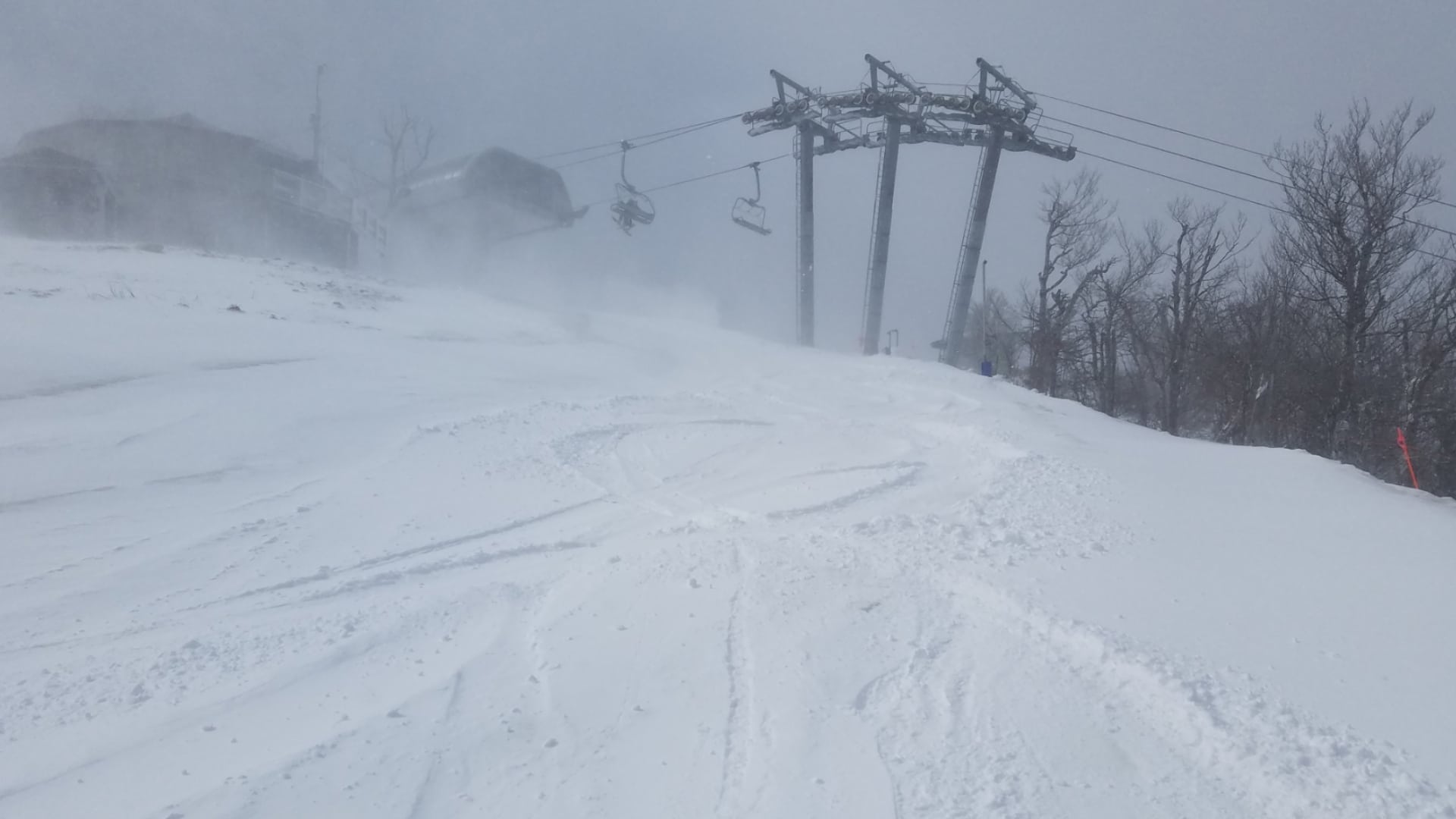 This goes for not only her, but to the other passionate individuals who keep the internal ski and board flame burning within no matter how cold it is outside.  I met a volunteer ski patroller named Steve that travels up from Florida to help out when he can.  Again, I am bad with names and did not have anything to write down with, but nonetheless his commitment to this activity and the safety of others is commendable.  Thank you sir.

Overall, it is up to each of you to determine how committed you are and how far you are willing to go.  We know that the end of the season is near, but do you know that March is arguably the best time to be on the slopes?  Unless you stumble upon a freak freezer event such as this, you will most likely encounter top to bottom terrain with multiple runs available at a discounted lift ticket rate.  Even if you do draw the cold card, you are most likely prepared to layer up and be adventurous nonetheless.

Besides, it is springtime, which means you should expect the unexpected and plan on it being a little weird.  Hopefully you have your costume ready for the fun that is to come. 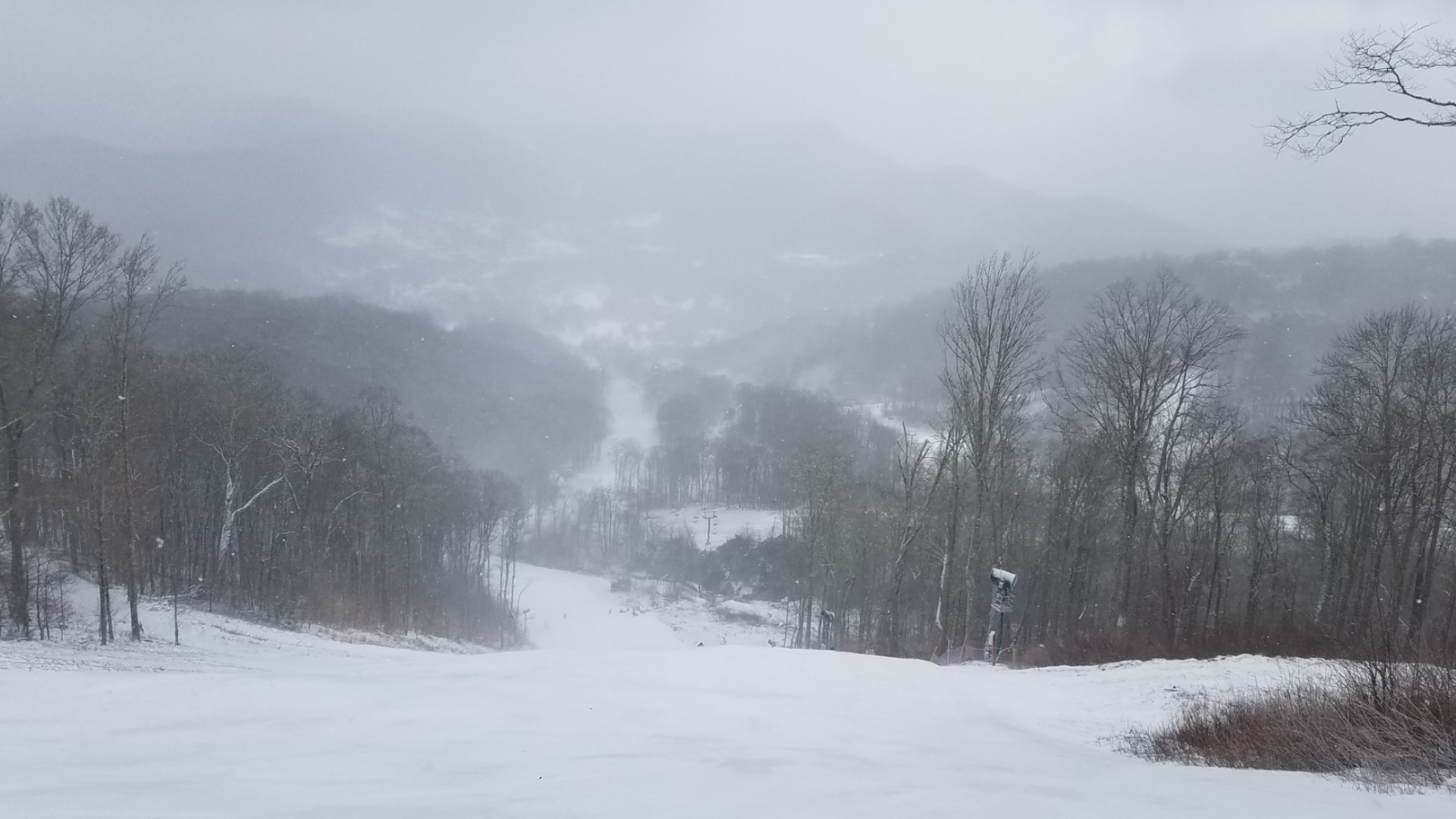