Drying Out for the Time Being 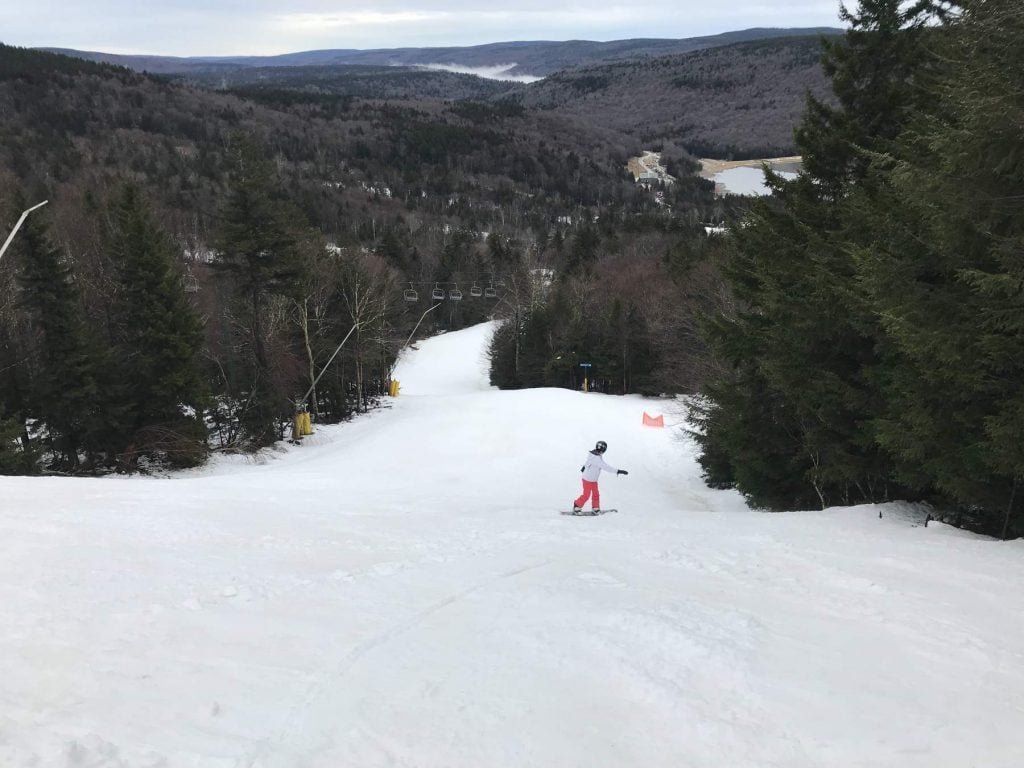 Yesterday was soggy to say the least.  An inch plus of underdeveloped snow fell at many ski areas in the region, especially for those in North Carolina.  The weather today will be much better, and drier, but we do have some more sogginess in the forecast unfortunately.

A belated Merry Christmas and I hope you all are having a good holiday season.  It’s been a few weeks since I was with you last (this is Kenny), so I decided to pop in and take over the morning report.  If you follow us on social media, you’ll know that I’m here at Snowshoe and have been for the past several days.  Today will be day number 4 in a row of riding and my legs are certainly feeling it.  Thank goodness for hot tubs.  The snow has been great, even with the wet weather yesterday.  Heck, I probably did more riding yesterday than the previous two.  Braving the rain yielded a reward in the form of no lift lines during the morning hours.  Double digit laps on Ballhooter by 11am wasn’t something I was expecting during this busy holiday week.

I’m currently staring out the window here in Highland House and it looks like today is going to be much nicer than yesterday.  I see some blue sky beginning to show.  In addition to that good news, I am delightfully surprised about what I am seeing on the webcams this morning in terms of snow at the resorts.  I was sitting at The Boathouse yesterday with my wife, checking out some social media posts and my timeline was littered with stuff from Panovich showing flooding going on in the NC mountains and foothills.  It had me a LITTLE worried as to what I’d see today.

You wouldn’t know that yesterday saw widespread significant rain though by looking at one of our many webcams, as all of them are showing plenty of white.  The only real indication of the rain is that there isn’t really any snow off trail anymore.  However, the contrast between the bare ground and the slopes now reveals how thick the slabs of snow are.

It’s been a good run of snowmaking in recent weeks, with December as a whole being fairly kind to us.  It’ll take a lot more than a day of rain to wash all the snow off the mountain.  That seems to be lost on the Weather Channel though as they had a weird interview yesterday with Snowshoe PR Director Shawn Cassell.  Apparently they think the whole place is barren of snow now!

The line that got me was when they were asking how long it would take with snowmaking to get the resort “back up and running”.  They should have checked out my video from yesterday to see that there’s nothing to get back up and running.  There’s still till plenty of snow!

It is live TV though, and unscripted at that.  It’s hard to come up with things to say on the spot, so we shouldn’t hold it against them too much.

For those who weren’t like me and didn’t want to deal with the elements yesterday, today is looking much improved and should feature good conditions to make some turns.  I have a feeling the snow is going to be on the crusty/hard packed side this morning thanks to that rain and then some chilly/windy conditions overnight, but it should soften up as the day wears on.

You’ll definitely want to get out on the slopes today or tomorrow if you can, because it looks like more underdeveloped snow is in the forecast beginning late tomorrow and into New Year’s Eve.  Brad Panovich talks about that in his latest forecast that he sent in.

As Brad mentions, it’s been a good start to the season.  The winter weather here in the region is cyclical though so this few days of rain isn’t unexpected.  The only winter I can think of where it stayed cold and snowy throughout the entire season was 09/10.  It’s just part of being a skier and snowboarder in the Southeast.

I’m not going to go resort by resort and give you the numbers this morning.  Rudy has been doing a good job of that on a daily basis and as always you can check out the SNOW REPORT to get all of that info.  We did see base depths drop a few inches and a handful of trails have been lost for the time being in the past 24 hours.  Things are still looking pretty good though.  Some resorts are fairing better than others, whether it be because of more favorable snowmaking conditions, more natural snow, or just better snowmaking equipment in general, but as a whole the region is in solid shape.  It’s not all time, but it’s also not the late December of a few years ago where not a single slope was open.  All in all, it’s been a pretty decent start to the season and hopefully gets better as we head into 2019.

Enjoy the next to next to last day of 2018.  And get off the couch, head to the mountains, get on the slopes, and work off some of that turkey and gravy.