And We’re Down to Two for Now 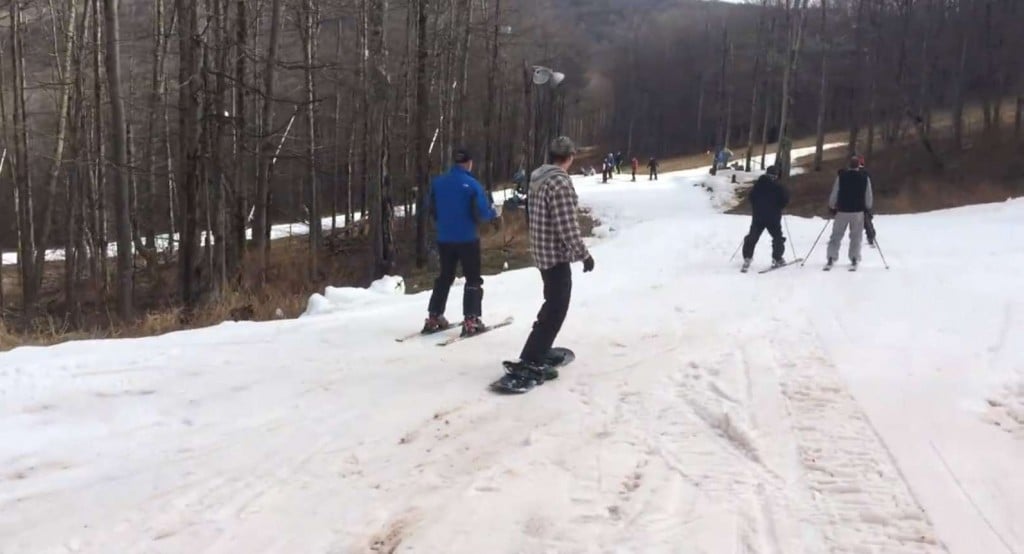 Welp, we’re down to only two open ski resorts here in the Southeast now.  A new week has brought about the temporary closure of two other resorts yesterday, those being Cataloochee and Snowshoe Mountain.  Both were pretty much expected and you could see it coming for several days.  Snowshoe had been informing guests that it would most likely happen, and Cataloochee was an easy call to make based on the webcam out there.

I chatted on the phone with Mike this morning who has been up at Snowshoe, and he said they made the right call to suspend ski and snowboarding operations for the time being.  The open trails were getting pretty narrow which makes it kind of sketchy to go around people.  They’ve posted on their Twitter account that they plan on re-opening sometime around January 5th.  Cataloochee will open Saturday I bet based on the weather outlook (more on that in a minute).

The two remaining resorts that open for skiing and snowboarding here in the Southeast are Timberline and Wisp.  I have no idea how they are open to be honest.  Even more astonishing is the fact that Timberline opened up some new terrain yesterday.  When I saw that on Twitter I had to do a double take.

They’re up to 4 trails now with 2 lifts, so kudos to them for keeping it going.  We’ll see how long they can make it.

Wisp continues to offer a single trail, Sunset Boulevard, and a couple of carpet lifts.  It’s not much, but hey it’s more than 15 other resorts in the region can say.

Interestingly enough, both Wisp and Timberline were showing temperature readings of 30 degrees this morning.  According to the National Weather Service, the high at Wisp is supposed to be only 33 degrees today with a wintry mix today and tonight.  It’s a similar forecast for Timberline.  That wintry mix and the fact that it’s going to be in the 50’s with rain tomorrow and Wednesday is probably why they didn’t make any snow.

Speaking of the weather. WCNC Chief Meteorologist Brad Panovich sent us his latest video forecast.  The title of the email was “Light at the End of the Tunnel”, as it looks like 2016 is going to bring about sustained colder temperatures.  FINALLY.  I talked about this in my post Saturday morning, and Brad is echoing those same sentiments.

We just have to get through the next few days first!  Looks like more warmth and heavy rain is in our immediate future.  I was going through some of the North Carolina ski cams yesterday and it was so odd to not see a single patch of snow on one of them…in late December.  If some of you don’t know, I live down in Davidson on Lake Norman, just north of Charlotte.  Yesterday I was out and about in shorts and a t-shirt.  So weird.

Friday and Saturday look to be anything but shorts and t-shirt weather.  A lot of resorts will be able to make snow around the clock beginning Thursday night and continuing through Sunday.  The forecasted highs at Snowshoe right now are 26 on Friday, 27 on Saturday, and 27 on Sunday.  Wooo!  That’s more like it.  Check out the image below, which shows the GFS forecast meteogram for Beckley, home of Winterplace.  They should be able to crank out A TON of snow with weather like that.  That’s about 4 days of around the clock snowmaking. 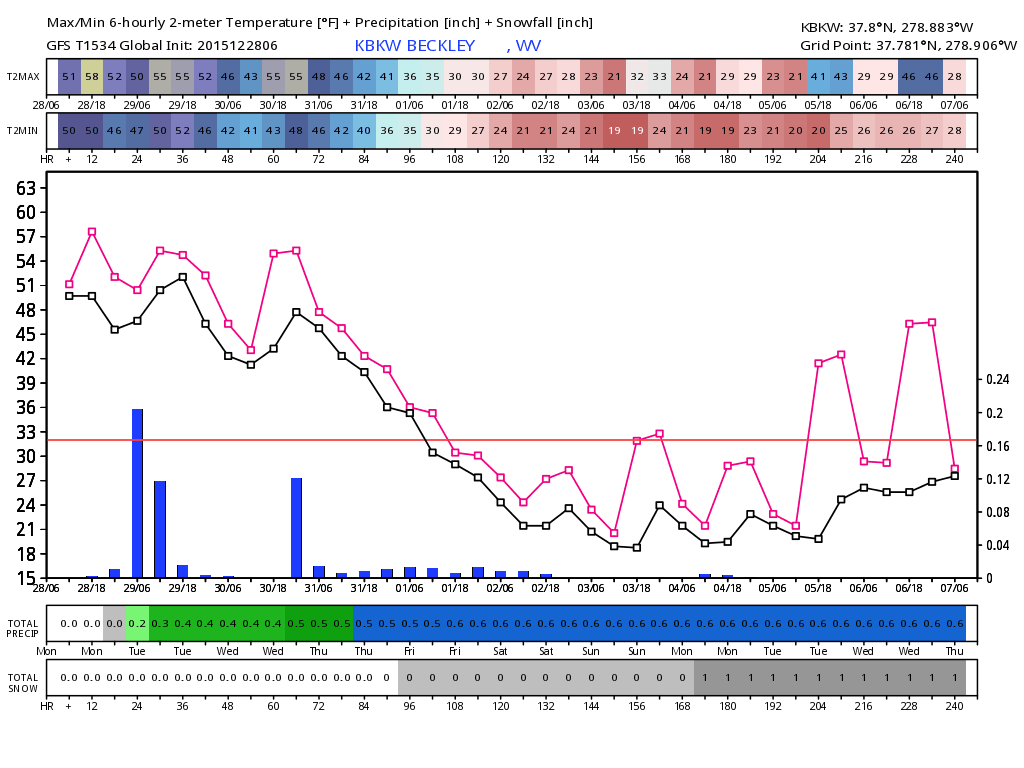 Even the resorts that don’t get to make snow around the clock, such as those in Virginia, they will be able to do so at night, so that’s good.  Next Monday’s First Trax report should be a lot more fun to do than today’s.  I am already really pumped for the weekend.  I only have two days under my belt right now.  I should double that with what I’m hoping will be a Saturday session at Beech and a Sunday morning session at App before scooting back down the mountain to go to the Panthers game Sunday afternoon.  Thank goodness for that game getting flexed to 4:25!

Winter is coming.  I promise.  In the meantime, if you have some time to kill today like me (no work all week, thanks Mike!), check out a couple of articles here on the site that were posted yesterday.  Joe Stevens sent in his weekly Snow News is Good News piece.

And davidski (David McCue) also sent us his latest article of the season, all of which have been very well received by our readers!

That’s all for today.  Try to keep your spirits high.  Think cold and think snow!