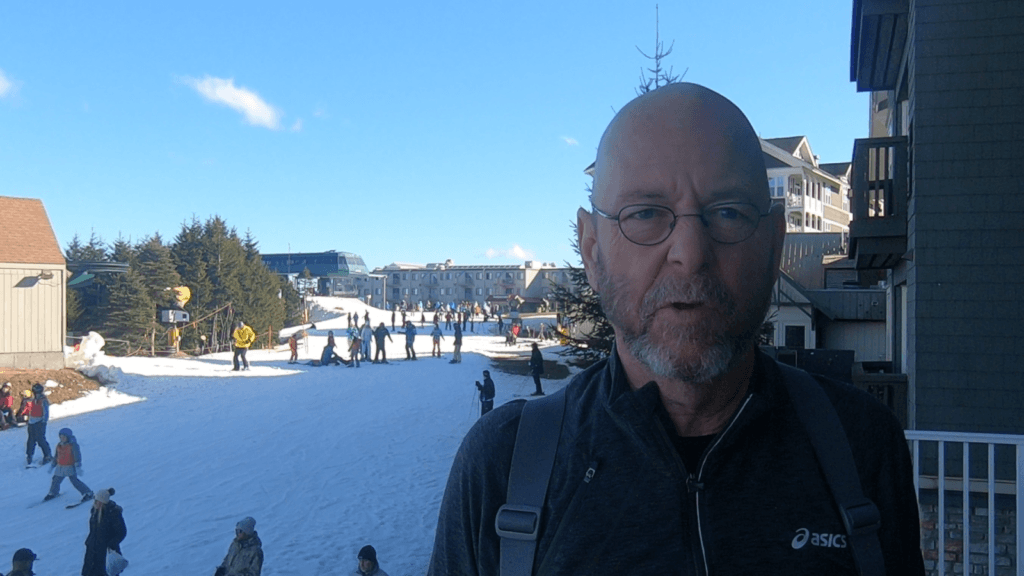 That has long been the mantra of those of us who are blessed to live in the mountains. If you don’t like the weather, just give it a few minutes and it’s likely to change and THAT is exactly what has happened today. Kenny Griffin reported early this morning that rain was falling and that was indeed the case before daybreak. Then around 7am Joe Stevens texted me about making some turns on the mountain.

I semi-balked as at the time of his text things were looking p-r-e-t-t-y bad with a light drizzle. Thirty minutes later the rain had stopped and the skies looked decent. We met up at 8:30am and the conditions were very wet with a heavy mist falling. We hung out for a few minutes and the moisture all but stopped and the fog and clouds crept back in.

However we decided to take a chance on the borderline conditions and were rewarded with firm, variable snow cover and a really nice time on the snow. Another thirty minutes or so and the skies completely cleared and the snow softened and we had a blast.

I made turns with various members of our crew as well as Joe Stevens and his son Christian. As you’ll see in the short video below, the skies have completely cleared and the temperature is 49° at 2pm.

The forecast is for temperatures to continue to fall across all of our region’s mountaintops – bringing on the snowmaking crews. There’s even some natural snow in the forecast – which when you look at the gorgeous blue skies…is hard to believe. However, wait thirty minutes…

Joe Stevens comments on the weather, snowmaking and more.

Previous Post
Oh the Weather Outside is Frightful…
Next Post
Turned Out to be an Awesome, Bluebird Day