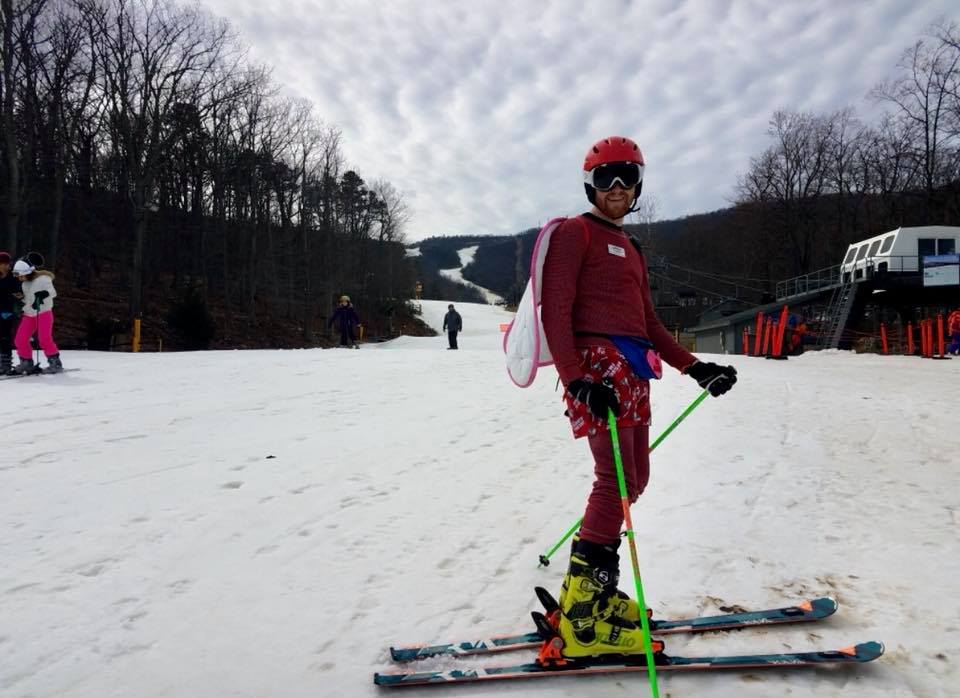 The weather today has myself and many others having to look at the calendar twice as we’re going to experience a spring preview.  February?  A good bit of clouds will remain but man oh man is it going to be mild.  The difference between today and Saturday is going to be drastic though as relatively colder temps return for the weekend.

It is a warm start to this Thursday to say the least.  Temperatures in the 50’s for almost all of the resorts means the snow will already be soft and slushy at rope drop.  Many snow reports had “granular” included in the surface condition with Timberline even calling it “spring conditions”.  Base depths dropped a bit with Appalachian Ski Mountain going down from 92-102″ to a more reasonable 48-72″.  Canaan Valley Resort even noted that they didn’t groom any slopes overnight to help preserve the snow.  When the temps are this mild and the snow is this soft, running a heavy groomer on the slopes just expedites the melting. 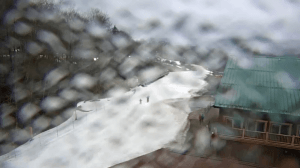 We also have some light showers possible today and several of the webcams this morning are showing rain drops on the lenses.  High temps will be in the upper 50’s and 60’s.  I’m currently looking at the NWS forecast for one ski area in Virginia and the forecasted high is 69 today.  Yikes.  Tomorrow will start out on a similar note, although it won’t be quite as mild and the underdeveloped snow will be heavier.  Basically, it’s going to be a sub-par today and tomorrow for snow lovers.  I plan on doing some yard work today if the rain holds off.  That is not something I wanted to be saying in mid-February.

The cold front that I’ve been talking about all week long is still slated to move through just in time for the weekend.  Temperatures will drop through the day tomorrow and we will hopefully see many resorts make snow tomorrow night.

Notice the temperature drop at Snowshoe during the day tomorrow.

Everyone is trying to stay optimistic right now and a few resorts noted the potential for snowmaking, and even natural snow, on their snow reports.  Temperatures Friday night will be just below freezing for many of the resorts.  Usually at this point in the season, and many times in recent weeks, we wouldn’t see widespread snowmaking with temps in that range.  However, with it being a holiday weekend and a rough week in terms of the weather I’m thinking most of the resorts will try and crank out as much man-made snow as possible for the weekend guests.

Can’t wait to see this on Sunday!

As for the weekend…Saturday will differ depending on which ski area you’re at.  There’s a better chance of light snow the further north you are.  Go south and the chances of a cold rain increase.  The saving grace for the weekend is Sunday, when we should see things clear out and hopefully see the return of the sun.  Sweet, sweet beautiful sunshine!  By the time Sunday gets here it will have been a while since we’ve had a clear day.

I wish the forecast was better.  It is what it is though.  Admittedly, there are some thinner spots beginning to show up on the webcams and you can tell it’s been a rough week.  Today and tomorrow won’t help that.  Snow conditions through this weekend should be fine though, especially if we get a night or two of snowmaking.  The snow will firm up with the cooler temps and the groomers can do their thing and spread it all out.  The holiday weekend probably won’t be as good as MLK, but there will be a ton of open terrain.  Lots of fun to be had!

We definitely need a change in the weather pattern though.  December and January were fantastic, but February has been a stinker so far.  We’ve had plenty of precipitation but the cold air just hasn’t been there to accompany it.  We’re only halfway through the month.  Hopefully we see things change for the better, and soon.  This weather is killing me!

Previous Post
Warm and Wet for the Next Few Days
Next Post
President’s Day Weekend Ski Forecast for the Southeast. 2/15/2018