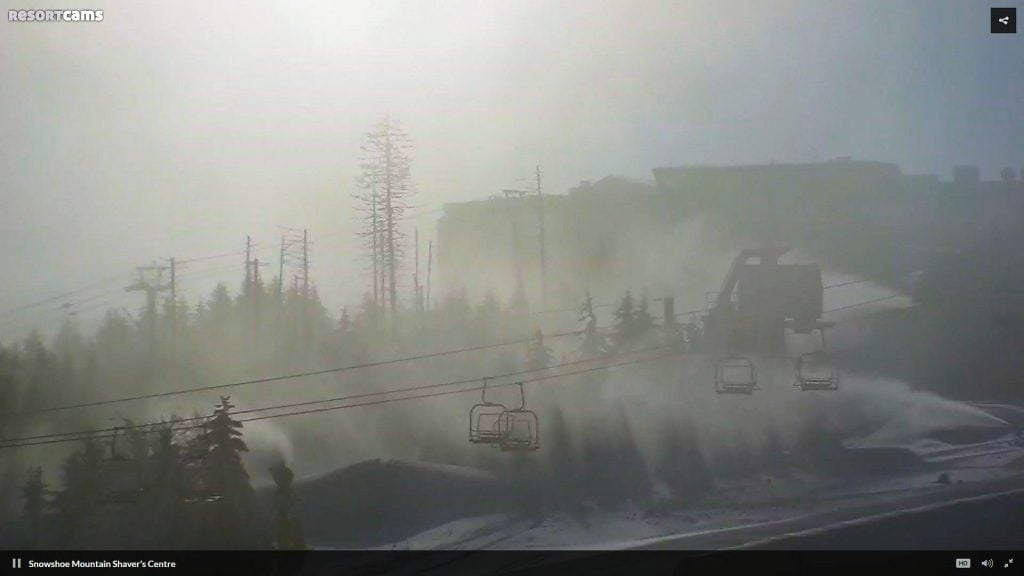 We are now on the tail end of our first weekend of skiing and snowboarding for the Southeast and mid-Atlantic ski resorts as FIVE of the sixteen ski areas have operated with pretty good terrain. The basic theme of today’s mountain report is probably the difference that ONE DAY can make in terms of conditions on the mountain slopes.

Early on Saturday morning I witnessed a lot of thin coverage at the base of Sugar and Beech Mountain as well as some thin coverage even atop Snowshoe Resort. To be fair, the five ski areas that are open today got open only after 48 hours or so of snowmaking LAST Saturday and Sunday. They also had limited snowmaking ops mid-last-week. However, yesterday morning things were little a bit “worn”. 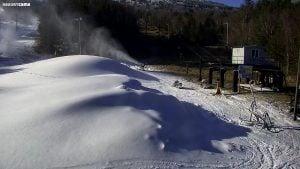 Snowshoe is also making snow at Silvercreek and other closed terrain including Cupp Run. Click to Enlarge!

Fast forward 24 hours and the snowmakers at each of these open ski areas have done an awesome job of throwing some “manmade-white-makeup” on those areas and things look amazing for your Sunday ski and snowboarding sessions.

One quick tour of our LIVE, STREAMING, SKI WEBCAMS will show you that not every ski resort is operating with the same “management manual” as many have not yet made snow. Canaan Valley and Winterplace resorts have been blasting the slopes in preparation for their opening days and we can assume that Timberline Resort has been (their webcam is down).

Wintergreen Resort in Virginia has made a little bit of snow but the truth is that none of the Virginia ski areas have had consistently cold enough temperatures to make it fiscally or physically possible to make snow as yet. 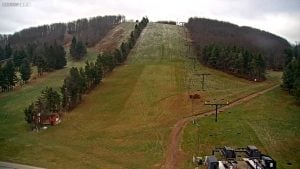 Wisp Resort is waiting for this week’s rain to move out to begin making snow. Click to Enlarge

We’ve been monitoring the Wisp Resort webcam and they typically get the same kind of weather and temps as Snowshoe and Canaan Valley and it IS 30° this morning but as yet, they have not cranked up the snow guns.

Wisp Resort held a winter fashion show and some free entertainment on Saturday so we can probably expect to see them making snow now at every opportunity to get open early in the month.

We’ve had a few people emailing us asking “Why isn’t Wisp making snow and opening? Heck, Seven Springs is only an hour away and at lower elevations and they are opening. What gives?”

Another Wisp Resort fan and season pass holder asked to be anonymous but asked, “Other local ski areas started making snow days ago and opened this weekend. Why not us (Wisp)?

We reached out to the management crew at Wisp and we got the answer we pretty much expected. They have had their eye on the wet weather that is heading their way Tuesday-Thursday of this week. Additionally high winds have been prevalent over the last few days. Simply put, the forecast of warmer/wet weather influenced their decision to stand pat and wait to begin making snow.

Resorts are looking at THIS forecast for this week. Snowmaking weather returns Thursday night or Friday. Click to Enlarge

The good news for Wisp and ALL of the ski resorts is that colder, more consistent temperatures look to be hitting after this rain system moves out. We are thinking that Wisp Resort fans will see the snowmaking equipment crank up in earnest Friday, December 2nd and they will open within a day or so of that. Look for Much the Same from the Rest of the Ski Resorts…

These next three or four days will be challenging for the ski areas that ARE OPEN to maintain conditions. They’re great at it, so they will minimize the damage from the storm systems that seem to be heading our way. Weather gurus are forecasting two surges of rain to hit this week. The first will hit Monday night and last into Tuesday. Then a more significant system will push in early on Wednesday and last into Thursday. Most meteorologists are forecasting widespread rain totals of 1 to 3 inches of RAIN (or under-developed snow as Joe Stevens calls it) this week – with some locally heavier rainfall amounts. We need it as this will extinguish all of the wildfires in the region.

So for all of you who have emailed us asking why this or that ski area has not made snow – there you have it. To operate a ski resort you have to be a bit of a riverboat gambler and some management peeps are a bit more of a gambler than the next. Also some are handcuffed a bit by more “logical thinking” accounting peeps.

So enjoy your Sunday and Monday of skiing and snowboarding if you have the opportunity to hit the slopes over the next two days. Then sit back and enjoy some much needed rainfall this week and watch for the snowmaking crews to crank back up Thursday or Friday nights. Then I think we’ll see some consistent cold temps and even some natural snow!

Til then…here’s some details for your Sunday pleasure:

Snowshoe Resort – 22.8° – Making snow across closed terrain, including Cupp Run. They are open with 7 slopes and 3 lifts for day sessions only. Snowshoe’s marketing crew posted,

It looks like a beautiful day is in store for us here on the Mountain. Opening weekend has been a blast! Thanks to everyone who came out to make those first turns of the season with us. Snowmaking has continued around the clock on closed terrain and we expect to open more trails very soon. Progression Park is open with 6 features and 1 jump. Snowmaking is in progress on Progression Park. 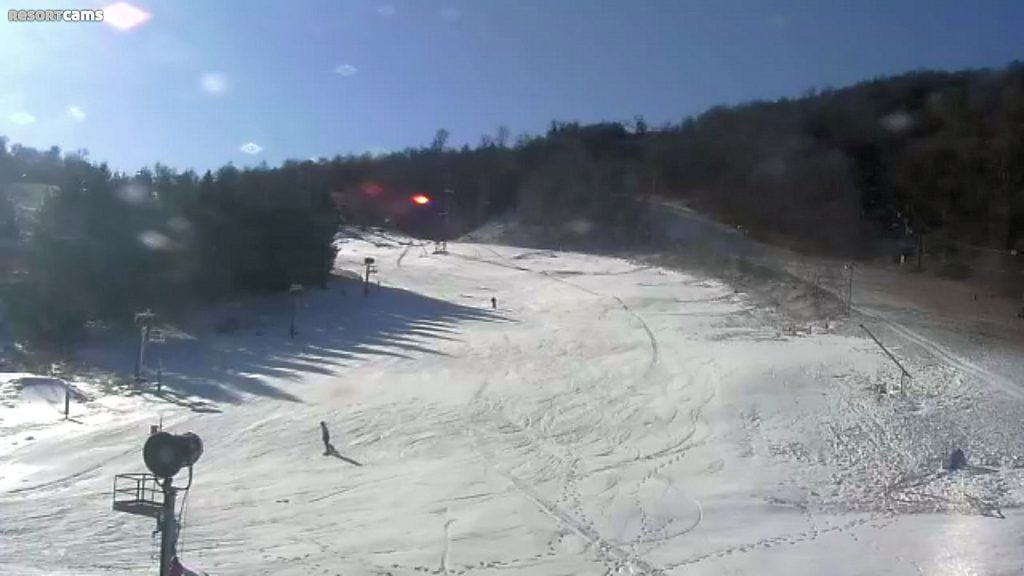 Beech Mountain Resort – 30° – They are open for day sessions Sunday with 6 slopes and 3 lifts on a groomed base. I was up on Beech Mountain last night and witnessed the fact that Beech was blasting the slopes – full bore. The snow guns are OFF as of 8:30am Sunday morning and things look pretty nice atop their 5000′ elevations. What a difference a day makes.

Appalachian Ski Mountain – 29° – Made snow and open with 7 slopes and 4 lifts. One terrain park is open as well as ice skating for day and night sessions.

Cataloochee Ski Area – 32° – Their website and Weather.com is reporting 43 & 35° but we have an on mountain reporter who shared that via their car temperature – it was 32° this morning and that seems to be supported by the fact that they are still making snow this morning at 8:33am.

Cat will operate for DAY SESSIONS ONLY TODAY on 6 slopes and 3 lifts and a conveyor.

They also want to remind their fans that next Saturday and Sunday, December 3 & 4 marks their 4th Annual Cataloochee Ski & Snowboard Swap at the area.  Sign up to bring your gently used winter clothing and used hardgoods to sell on both Saturday and Sunday, or shop for the best deals of the season on used equipment.  For more information, visit their website at www.cataloochee.com/swap.

Also next Sunday, December 4, is Can-U-Ski Food and Coat Drive for Haywood Christian Ministries.  24 cans of food or 2 winter jackets of any kind will get you your lift ticket on Sunday for free, it’s a $65 value.  Cans and coats should be dropped off at either the Ghost Town parking lot at the bottom of the hill or at Cataloochee Ski & Sports and you will receive your lift ticket there.  Those persons needing to rent equipment and get lessons will pay for those items at the ski area when they show their lift ticket. 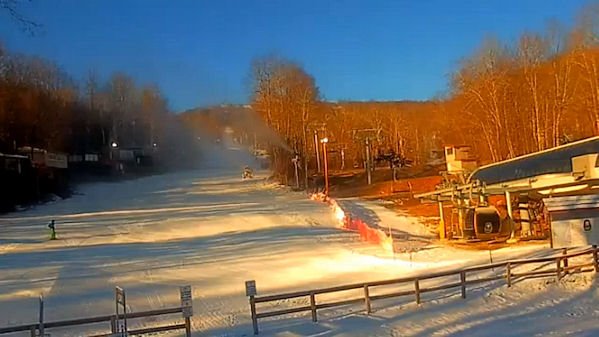 Again – what a difference a day makes. This is Sugar Mountain at 9am Sunday morning via their LIVE webcam. Click to Enlarge

Sugar Mountain – 30° – still making snow as of this mountain report and they will be open for day and night sessions on 6 slopes and 3 lifts.

Check back Monday for updates on the weather forecast, resort openings and more as Kenny Griffin will be taking the FirsTrax reins for this week and I’ll see you guys on Saturday.