Day number two of skiing and riding here in the Southeast is upon us!  Yesterday, both Cataloochee and Sugar opened to everyone’s delight.  I haven’t seen any reports from Cataloochee, but I was at Sugar and conditions were pretty much what would you expect after less than 48 hours of snowmaking.  The coverage was pretty good though and the weather was really nice.  I was out there with a group of people and we all had a great time.  You can check 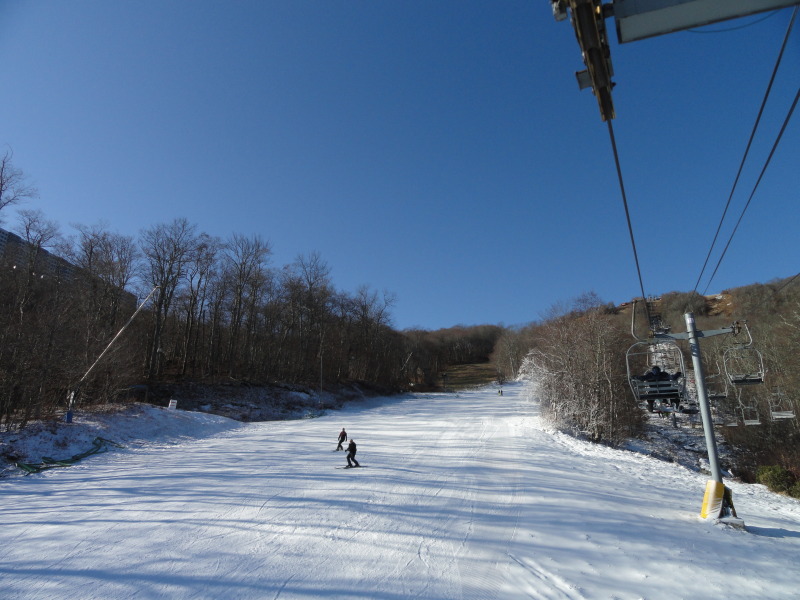 out a trip report from yesterday by heading over to the messageboard.

The coverage and snow conditions were pretty good at Sugar yesterday, especially considering they had only been making snow for less than 48 hours.  Bluebird skies and warm temps are always nice too!>>>>>>>

On a quick side note, the morning after the first day of riding for the season is always brutal.  Today is no different for me.  I am SORE.  It’s been over 7 months since I snowboarded, and I can definitely tell.  I feel like an old man right now hobbling around my house.  I thought working out and playing tennis all summer would have helped more than this.  Good thing I have nothing to do except lay around on the couch all day and watch football!

Like I said, Cat and Sugar are both open again today.  Sugar will probably attempt to stay open as long as they can. There’s already some brown spots showing up on their cam though, so things might start to get a little rough out there after today.  However, Cat has already announced they will not be open during the week at all and are hoping to reopen next weekend.  That’s probably a good call as the weather this week is going to be rather warm.  The next window of opportunity to make snow looks to be Thursday.  So if you didn’t ski or ride yesterday, get out there today!  It will be another LONG week of staring at cams and weather forecasts if you don’t!

Before I go, just thought I would remind you guys that we now have a Twitter and Facebook page.  I’m going to be tweeting and posting stuff a lot thoughout the winter as both are good platforms to get information out quicky.  Yesterday, I was actually posting pics from Sugar on my phone.  I thought it was pretty cool to give everyone up to the second reports from the mountain.

Email me with pics, questions, comments at [email protected].

Previous Post
JamSandwich posted this Opening Day Corduroy at Sugar Mountain yesterday! Click to enlarge and see the rest of his Trip Report!
Next Post
Some of us will take our snow ANYTIME and ANY WAY we can get it.